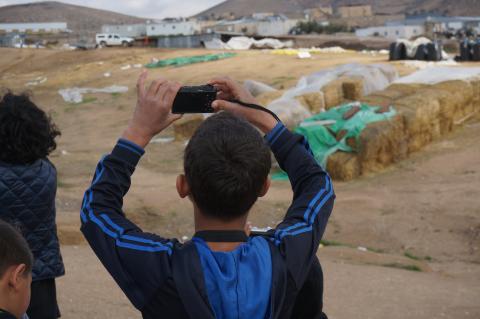 Palestinian children of Bedouin villages in the Negev desert use cameras to document land confiscation and destruction of their villages by the government of Israel. The following article was published in the September-October 2017 issue of NewsNotes.

Although President Trump sent his son-in-law and senior advisor Jared Kushner to meet with Israeli Prime Minister Benjamin Netanyahu and Palestinian leader Mahmoud Abbas on August 23, hope for a revival of peace talks remains slim. Netanyahu’s stance on ceding control of Palestinian land is clear: At a recent event to celebrate the fiftieth anniversary of occupation of the Palestinian territories, Netanyahu told the crowd gathered at the illegal Israeli settlement in the West Bank, “This is our country.”

“We are here to stay, forever,” Netanyahu went on to say. "There will be no more uprooting of settlements in the land of Israel. It has been proven that it does not help peace….We've uprooted settlements. What did we get? We received missiles. It will not happen anymore.” Without ambiguity Netanyahu has publicly declared that Israel will not compromise, and indeed, will continue its plan to remove Palestinians from their land, bit by bit.

In the Negev desert of southern Israel, which comprises over half of Israel’s territory, the village of Al Araqib was destroyed by Israeli forces on August 1 for the 116th time since 2010. Al Araqib is one of approximately 35 Palestinian Bedouin villages in the Negev which are “unrecognized” by Israel, though they are within its borders. As a result, they are not entitled to municipal services such as water, electricity, or trash collection.

Some of these villages have been in existence since before the creation of the state of Israel. Others formed as a result of it – when the young Israeli government displaced entire communities onto new lands in the late 1940s. Many of them are under constant threat of destruction to make way for the construction of Jewish settlements, as is the case with the Bedouin village of Umm Al-Hiran. Early this year the Bedouin village was razed, and in its place, the Israeli government plans to build a new town called Hiran. Although the courts assured the Palestinian residents of Umm Al-Hiran that the new town would be open to all Israelis, the bylaws of the Hiran cooperative association clearly state that members must be “Jewish Israeli citizens or permanent residents who uphold the values of Judaism.”

Palestinians inside Israeli borders and in the occupied Palestinian territories have been dealing with this systematic and ongoing displacement plan since the State of Israel was formed. It is difficult to hope for a better future with such a challenging past and present, yet hope remains.

The fact that Al Araqib has been demolished more than 100 times in the last seven years also highlights the incredible tenacity and resilience of its residents: They have rebuilt their village over 100 times in seven years. While many have left the village, about 100 residents from 22 families remain. And every time the village is destroyed, those families immediately begin to rebuild using the demolished scraps.

Each time the village is under siege they hold nonviolent protests which receive international attention. Many organizations, both Jewish and Palestinian, work to support the unrecognized Bedouin tribes of the Negev, some with legal aid, such as Adalah, the first non-profit, non- sectarian Palestinian-run legal center in Israel, and others with education and economic programs, such as the Ajik-Negev Institute.

One creative nonviolent resistance effort is organized by the Negev Coexistence Forum for Civil Equality (NCF), a group that has coordinated ten-day photography workshops for children of the unrecognized villages since 2010. Children are given cameras and taught how to use them by volunteer professional photographers, both Palestinian and Jewish-Israeli. Photography has been recognized to be an important tool in documenting human rights abuses and NCF, along with other organizations, have been documenting the destruction of Bedouin villages for years.

The inspiration for the photography workshops was born out of the many requests professional photographers received from children of the villages to hold the camera while they were documenting demolitions. “We decided to provide not only tools but also equipment for the children to tell their story,” workshop organizers said. “In this manner, the child turns from being the object that is photographed to a subject that identifies significance in the world around him or her, and gives us a glimpse into their reality and point of view.”

Through this project NCF raises international awareness of the plight of Palestinian Bedouins while empowering children through learning a skill, introducing them to political engagement, building confidence and self-awareness, and teaching the incredible tool of nonviolent resistance.

Faith in action: To see some of the children’s pictures and learn more about the workshops, go to http://www.dukium.org/hrd-kids-workshops/.

Photo: Child with a camera during the Negev Coexistence Forum for Civil Equality photography workshop.