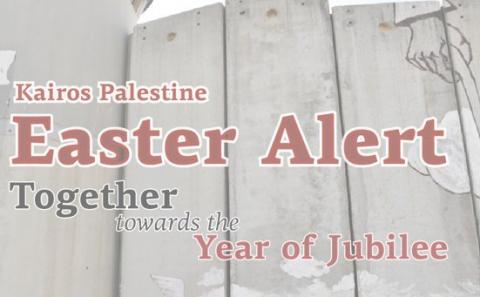 The re-election of Benjamin Netanyahu in Israel widens gaps in the path to peace for Israelis and Palestinians. This article was published in the May-June 2019 issue of NewsNotes.

For those who support a peaceful resolution between Palestine and Israel that restores human rights and agency to Palestinians, the reelection of Benjamin Netanyahu for a fifth term as prime minister of Israel on April 9 does not inspire hope. It was Netanyahu‘s narrowest victory to date, likely in part due to looming corruption charges, but also dwindling support from right-wing nationalists within his party who believe Netanyahu’s policies with regard to Palestinians do not go far enough to restrict their rights and confiscate land for the State of Israel.

Going into the final days before the election the race was tight. Knowing he needed the support of the right wing in order to win, he made a last-minute declaration that he intends to annex illegal settlements in the West Bank in his next term as prime minister. Many believe that Netanyahu’s personal beliefs about Palestinians are not as right-wing as his actions might suggest and dismissed his promise of annexation as campaign fodder—which does not preclude the possibility of his following through with the promise.

Hanan Ashrawi, senior official of the Palestinian Liberation Organization, called the promise of West Bank annexation “the end of any chances of peace”, a sentiment shared many times over as conditions have deteriorated for Palestinians over time. Past failed peace negotiations have always included compromise by land swap, so further entrenchment in the West Bank to change the “facts on the ground” only increases Israel’s bargaining chips in future land swap negotiations. With over 200 illegal settlements already established, maps of the West Bank already look like swiss cheese.

In 2017, President Trump took away another of the Palestinians’ bargaining chips in recognizing Jerusalem as the capital of Israel and relocating the U.S. embassy—a blatant move in favor of Israel over Palestinians, who will still have to try to negotiate for East Jerusalem as their future state capital while Israel has had it handed to them by the U.S.

President Trump has repeatedly shown strong favor of Israel over its neighbors and in contravention of international law, most recently when he officially recognized the Golan Heights, land captured from Syria in the 1967 war, as Israeli territory. In a show of gratitude Netanyahu responded with a tweet on Easter announcing that he intends to name an illegal settlement community in the Golan Heights after President Trump.

The U.S.’s support for Israel’s sovereignty over occupied territory does not carry the force of law, but to date international law has been entirely ineffectual in protecting the Palestinians, and the support of the U.S. has protected Israel from having to respond to the condemnation of the international community over the Israeli government’s treatment of Palestinians.

Israel may annex the West Bank, but “we will stay there,” says Palestinian Foreign Minister Riad Malki said of the West Bank. “The international community has to deal with us.”

2019 marks ten years since another plea was made to the international community, by a group of Palestinian Christian leaders who published a document called A moment of truth: A word of faith, hope and love from the heart of Palestinian suffering, also known as the Kairos Document. It was a cry to Christians around the world to understand the suffering of the Palestinians under Israeli occupation.

Every year, Kairos Palestine posts an Easter Alert, inviting Christians to reflect in solidarity with Palestinians. This year’s Easter Alert laments that the situation is “even worse 10 years later” than in 2009 when the authors felt they had “reached a dead end in the tragedy of the Palestinian people.”

Yet there must always be hope, and it can be found in reflecting on the meaning of Easter to Christians around the world, including those in Palestine: “…let us remember that the journey to the cross does not end on Friday….Sunday will inevitably come! It will be a day of resurrection gladness; a day in which we remember that truth will overcome injustice; light will overcome oppression and discrimination. And because we believe in life and resurrection, we commit even stronger to work tirelessly to make this a reality. Amen.”

Faith in action: Kairos Palestine invites individuals and organizations to sign on to their petition to end the occupation of the Palestinian territories, to be delivered to Israeli embassies around the world on May 15. http://bit.ly/KairosPetition