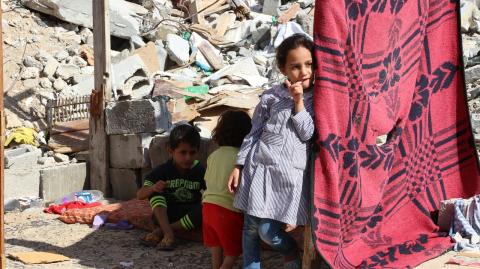 On December 23 the UN Security Council passed a resolution calling for an end to Israeli settlements with a vote of fourteen in favor and one abstention – the United States. The following article was published in the January-February 2017 issue of NewsNotes.

It is illustrative of international diplomacy, particularly at the United Nations, that a vote of abstention can be significant. On December 23 the United Nations Security Council (UNSC) passed Resolution 2334, condemning the building and expansion of Israeli settlements in the West Bank as a “flagrant violation under international law.”

Of the fifteen members, fourteen voted in favor and one – the United States – abstained.

Just twenty-four hours earlier it seemed the vote would not occur when Egypt pulled its draft of the resolution. UNSC member states Malaysia, Venezuela, New Zealand, and Senegal carried the resolution forward anyway, forcing the U.S. to act: By abstaining, the U.S. allowed the resolution to pass.

With this action, the U.S. broke with a strong history of protecting Israel by exercising its veto power at the Security Council, as it did in 2011 when the U.S. voted against another resolution condemning settlement-building in the West Bank. Then-U.S. Ambassador to the UN Susan Rice insisted that the veto was not in support of settlement expansion but rather a statement of support for the issue to be settled through direct negotiation between the parties.

At the vote on December 23, the current U.S. Ambassador to the UN, Samantha Power, made clear what has changed between the 2011 veto and now: “The settlement problem has gotten so much worse that it is now putting at risk the very viability of that two-state solution.” As of 2016, there are more than 590,000 Israeli settlers in the West Bank, which includes east Jerusalem. “Rather than dismantling these [new settlement units] and other settler outposts, which are illegal even under Israeli law, now there is new legislation advancing in the Israeli Knesset that would legalize most of the outposts,” Power said.

In his press statement, Secretary of State John Kerry reiterated that the U.S. allowed Resolution 2334 to pass for one primary reason: “to preserve the possibility of the two state solution.” Both Power and Kerry belabored ongoing U.S. support for the state of Israel, as demonstrated by the recent agreement for the U.S. to provide Israel with $38 billion in military aid over the next 10 years – the largest such aid package in U.S. history. Power and Kerry also insisted that halting settlement expansion is both consistent with U.S. policy over the last fifty years and in Israel’s best interest.

Israeli Prime Minister Netanyahu does not agree. “As I told John Kerry on Thursday, friends don’t take friends to the Security Council,” Netanyahu said during a press conference held after the vote.

Members of Congress – both Democrat and Republican – quickly expressed opposition to the abstention, perhaps none more strongly than Senator Lindsey Graham (R-SC), who said the vote “empowered evil.” Senator Graham vowed to lead the charge in canceling the U.S.’s contribution to the UN – which amounts to 22 percent of the UN’s budget.

President-elect Donald Trump tweeted several times about the vote, including a message which said “As to the U.N., things will be different after Jan. 20.”

Had this vote occurred in 2008 rather than in 2016, it might have inspired some renewed hope in negotiations for peace between Israel and Palestine. But Donald Trump has already made clear his opposition to a two-state solution by nominating David Friedman for U.S. Ambassador to Israel.

In June, Friedman called J Street supporters of a two-state solution “worse than kapos,” a reference to Jewish concentration-camp inmates who cooperated with their Nazi captors. In a statement by the Trump transition team announcing Friedman’s nomination, Friedman said he plans to move the U.S. embassy in Tel Aviv to “Israel’s eternal capital, Jerusalem.”

It is likely that President Obama was motivated to take a strong step forward at the UN before the Trump administration and David Friedman, if confirmed as ambassador to Israel, are able to move the mark a few steps back.

Faith in action: Write to President Obama before January 20 to thank him for allowing Resolution 2334 to pass. After January 20, write to President Trump to urge him to continue opposing settlement expansion. Write to the President at: https://www.whitehouse.gov/contact or call the White House at  (202) 456-1111.