Israel/Palestine: Life in a Palestinian village 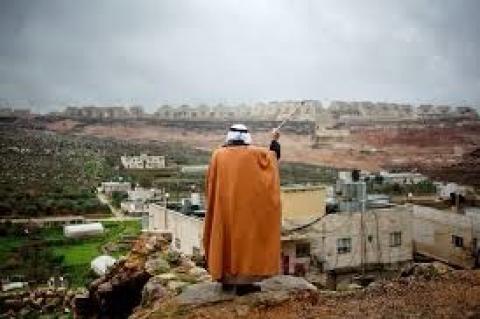 On February 23, the mayor of Wadi Foquin, a Palestinian village in the West Bank, spoke at a congressional briefing on the living conditions for the residents. He and other speakers appealed to the U.S. Congress to put pressure on Israel to halt the expansion of illegal settlements in the West Bank. The following article was published in the March-April 2016 issue of NewsNotes.

Ahmad Sokar, the mayor of Wadi Foquin, joined a panel of speakers on Capital Hill to speak about the effects of illegal settlements on life in the village of Wadi Foquin – a similar presentation to the one he gave at a congressional briefing a little over a year ago. He gave a brief synopsis of Wadi Foquin: in 1948, his village of 1,300 people encompassed 2,400 acres; last year 740 acres remained; today, only 475 acres are left. Wadi Foquin lies largely in “Area C” of the West Bank, the area that is under complete control of the Israeli government. Beitar Illit was an “outpost” established in 1989 on a hilltop not far from Wadi Foquin by a small group of Israeli families. Beitar Illit has since grown to a city of an estimated 60,000 Israeli settlers. In the same time period, not only has Wadi Foquin been denied the opportunity to expand, but the Israeli government has confiscated 80 percent of its land for the illegal expansion of Beitar Illit, with plans for further confiscations and no recourse for the people of Wadi Foquin.

The area has been mainly farmland for 800 years, with its residents largely subsisting as farmers and herders. Since the land confiscation of Wadi Foquin began, 150 farming families have been affected. Of the 1,200 sheep that were herded around the village in the past, only 200 remain. The land in this area is fertile due to a number of natural springs that provide the village and surrounding areas with a reliable water source – a precious commodity in the desert region. Unfortunately, because of the settlement’s large residential apartment buildings built into the hillsides surrounding the village, sewage from Beitar Illit drains into Wadi Foquin’s natural springs and farmland, rendering the water unpotable and farmlands useless.

Mayor Sokar showed pictures of a playground in his village that Israeli authorities ordered closed. Meanwhile, within view is a much larger playground for the children of Beitar Illit which the government has allowed to remain open. Additional expansion plans for the settlement include confiscation of the only road to access Wadi Foquin.

Another panelist, Professor Kifah Manasra of Al Estiklal University, described how Israeli security forces routinely use harassment techniques directed at women in an attempt to stop them from traveling, even to and from work and school. And, she reported, it is effective: many Palestinian families are wary of their daughters working or going to school outside of their towns if it involves having to pass through security checkpoints. When asked if the panelists still support a two-state solution given the deteriorating situation for Palestinians today, panelist Shukri Radaydeh, director of the Bethlehem Local Governorate, vehemently replied that Israel would not allow a one-state solution because of the demographics: if Israel were to welcome Palestinians as citizens, they would soon outnumber Jewish Israelis and become the majority. Mr. Radaydeh went on to say “They don’t want a one-state solution. They don’t want a two-state solution. They don’t want to give us equal rights. They don’t want to stop expanding settlements. They have a radical government in power and they don’t believe in peace.”

The final panelist was Rev. Dr. Susan Henry-Crowe, general secretary, United Methodist Church General Board of Church and Society, who visited Wadi Foquin last fall. She named the major issues of concern as the lack of access (to land, roads, resources and development), the palpable trauma exhibited by residents of this and other villages being squeezed out by settlements, and the ongoing violations of human rights at checkpoints, in building the separation wall, and other measures in the name of security. She highlighted actions taken by the United Methodist Church in support of righting injustice in the region, including a boycott of products produced by companies operating in the occupied Palestinian territories.

The panel was sponsored in part by the Faith Forum on Middle East Policy, of which the Maryknoll Office for Global Concerns is a member. For more information  and opportunities to support the people of Wadi Foquin, go to www.friendsofwadifoquin.com.