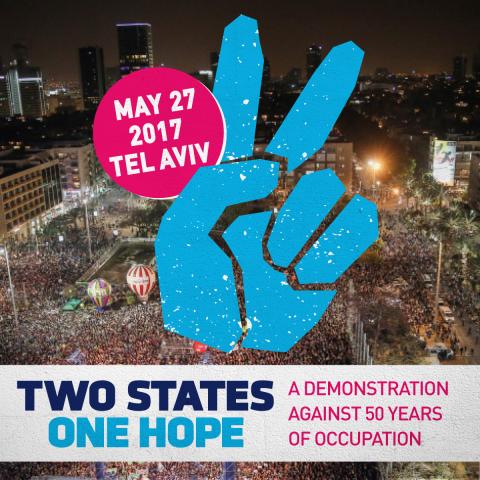 June 10 marked a grim anniversary—fifty years of Israeli occupation of Palestine following the Six Day War. The following article was published in the July-August 2017 issue of NewsNotes.

As settlements expand and prospects fade for a peaceful two-state solution, the current situation in Israel/Palestine is disheartening. Marking a grim anniversary of this intolerable state this month, organizations including B’Tselem, Amnesty International, Jewish Voices for Peace, and Defense for Children International-Palestine, among others, are hosting events and even year-long campaigns to remind the world that the conflict is far from resolved and that fifty years of military rule and repression of a people can no longer be considered “temporary” and must immediately end.

One such group, Churches for Middle East Peace, hosted a conference and advocacy day June 4-6, titled “50 Years Too Long” which brought together nearly 100 participants, including staff from the Maryknoll Office for Global Concerns, to learn from a range of leading thinkers of many different backgrounds and faiths. A rabbi from a local congregation, a Catholic Lebanese-American who founded the Arab American Institute, and a Muslim Palestinian working as a legislative aide to Senator Bernie Sanders were among the speakers at the conference who shared their perspectives on the challenges and opportunities for peace.

It was simultaneously devastating and hopeful to hear from a young Palestinian man who was shot in the back by the Israeli soldiers who occupied his family’s house for five years, yet has found the strength not to hate Israelis and to spread his message of forgiveness in the halls of the U.S. Congress.

It was simultaneously encouraging and disheartening to hear from an American rabbi who believes that the occupation must end immediately, but shared that his congregation remains “ambivalent” about speaking out. Similarly, in lobby visits to congressional offices following the conference advocating for humanitarian aid to Gaza, congressional staff were sympathetic to our pleas for the protection of civilians, yet unresponsive.

Meanwhile, in Israel, Prime Minister Benjamin Netanyahu marked the commemoration claiming to “seek peace with our neighbors, a real peace” – unfortunately, a vision of “peace” in which Israel “will maintain security control over the entire territory west of the Jordan River”. Further, he says, Israel will “insist that the Palestinians finally recognize Israel as the national home of the Jewish people”, and refusal to accept those two conditions is what is preventing the solution to the conflict.

It is Mr. Netanyahu who prevents the prospect of peace with such messages. First, the Palestinian Authority has “recognized Israel” and its right to exist as a state many times. Second, Israel cannot maintain security control over a future sovereign state of Palestine.

The past fifty years of occupation are filled with increasing despair for the plight of Palestinians as Netanyahu’s ongoing expansion of settlements dampens hope for a contiguous Palestinian state. Yet there is always hope in the future, because it is the future that can bring about change.

There was a sign of hope for the future on May 27 in Tel Aviv, where over 15,000 people attended a rally organized by Peace Now with the theme “Two States—One Hope.” The center-left Labor and Meretz political parties co-sponsored the event, with their leaders sharing sentiments that the international community longs to hear from their government: acknowledgement that Israel “forcefully rules another people” and that Netanyahu “lies when he tells us that… ‘there’s no way out’ and ‘there’s no partner’” and finally “the Israeli public supports compromise, an end to the occupation and says yes to two states for two peoples.” The head of the Joint List party, the third largest party in the current Israeli Knesset, called for the establishment of “a democratic camp around common basic principles and a clear call to end the occupation, a call for equality, democracy and social justice for all the state's citizens."

A recent poll conducted by an Israeli television channel found that while 39 percent of Israelis are opposed to a two-state solution and 14 percent “do not know,” a 47 percent majority still support the creation of a Palestinian state based on 1967 borders.

Faith in action: Sign a letter to President Trump  organized by Churches for Middle East Peace calling for an end to 50 years of occupation with a peaceful solution for Palestinians and Israelis. http://bit.ly/CMEPletter