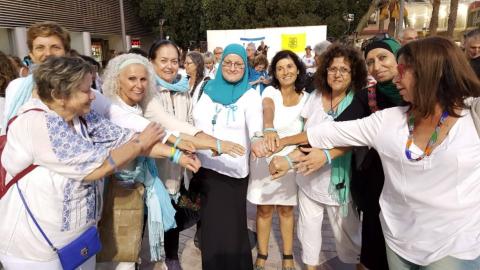 Frustrated with the stalled peace process, tens of thousands of Palestinian and Israeli women marched for miles through the desert calling for a viable peace agreement. The following article was published in the November-December 2017 issue of NewsNotes.

Thousands of Palestinian and Israeli women marched for peace over the course of two weeks starting in late September in what they called the “Journey to Peace.” They marched from Sderot, Israel, through the West Bank to the Dead Sea and on to Jerusalem, where they celebrated the conclusion by dressing in white and dancing arm-in-arm at a rally on October 10. The march was organized by Women Wage Peace (WWP), a group created in 2014 in the aftermath of the Gaza war and focused on the need for a solution to end the violence rather than holding one ideological line or another.

Women Wage Peace has a membership of more than 24,000 Israelis and Palestinians, all along the political spectrum, who share the common desire for “an honourable and bilaterally acceptable political agreement of the Israeli-Palestinian conflict which is to be reached by 2018.” This is the second march that the women have organized; they also hold monthly “parlor meetings,” and host weekly demonstrations at intersections in Israel, all aimed at moving the Israeli government back to the negotiating table with the Palestinian Authority.

As with other efforts meant to encourage a peaceful solution to this complex conflict, not everyone supports the message of the march. Some question what WWP means by “peace”: How can an event which includes Palestinian women from the besieged town of Hebron alongside Israeli women living in illegal settlements in the West Bank advance peace, when surely their visions of that solution are contradictory? How can the word “occupation” be entirely absent from their message?

The organization intentionally uses inclusive language to cast a wide net of support among Israeli and Palestinian women. Women Wage Peace proudly touts that among their members are right, center, and left-wing voters – even moderate settler women.

Some of the leading Palestinian groups that equate “normalizing” the relationship with Israel with accepting the status quo of an apartheid system spoke out strongly against the march. The Palestinian branch of the Boycott, Divestment and Sanction (BDS) campaign called for a “peaceful sabotage” of the “feminist normalization march.” Hamas condemned the march in an official statement, challenging Palestinians to “confront” the march and “isolate” those who organized it.

However, Palestinian Authority President Mahmoud Abbas expressed support for the march, and his Committee for Interaction with Israeli Society even organized transportation. In a personal message to the marchers, Abbas called for the creation of “a Palestinian state living side-by-side in peace with Israel.”

On the other side of the political spectrum, critics criticized the critics, suggesting that for many Palestinians “the priority remains making peace with Hamas and not Israel,” because Palestinians “identify with Hamas’s dream of destroying Israel and killing Jews.” To such critics, not wanting to “normalize” relations indicates not accepting the existence of the State of Israel.

If, in fact, the Palestinian political groups of Fatah and Hamas reunite and Hamas ceases to fire rockets into Israel, there may be hope for a future peace agreement—though you cannot look to the Israeli government for that hope: “Reconciling with mass-murderers is part of the problem, not part of the solution,” Israeli Prime Minister Benjamin Netanyahu said about the agreement.

It is significant to see thousands of women normally separated by walls, barbed wire, and soldiers, come together with a shared belief: that a peaceful solution is possible.