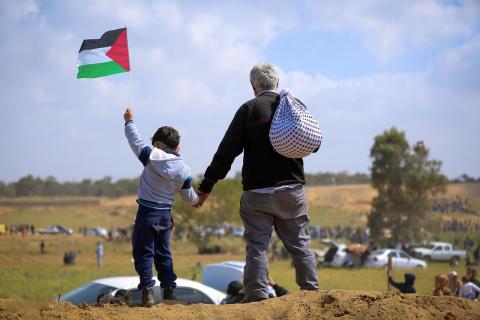 Palestinians deride new U.S.-led peace plan as an “economy first” approach doomed to fail. The following article was published in the July-August 2019 issue of NewsNotes.

Hundreds of Palestinians attended demonstrations in the West Bank and Gaza June 24-26, organized by the Palestinian Authority in opposition to the Trump Administration’s “Peace to Prosperity” economic conference being held concurrently in Bahrain.

President Trump’s son-in-law, Jared Kushner, organized the conference to rollout a $50 billion economic plan to bolster the Palestinian economy and rally support from the Arab states to fund it. Diplomats, businesspeople and government representatives from Egypt, Jordan, Morocco, Saudi Arabia, Qatar and the United Arab Emirates were in attendance. Notably absent were any official representatives from either the Palestinian Authority or Israel.

The “Peace to Prosperity” document is the first part of the U.S.-led Israel-Palestine peace plan, and quite the “carrot”, dangled in front of the Palestinians while they await the “stick”: the Administration’s proposal for a political solution to the conflict which they have yet to disclose. On its face, the economic plan indeed outlines proposals to fund many development projects which would be critical for the Palestinians to have an effective, stable, functioning and even thriving state once the Israeli occupation ends.

The plan includes a travel corridor between the West Bank and Gaza, major infrastructure projects such as water, sewage treatment, telecommunications, and health care facilities. It also includes significant investment in the tourist industry, allocating funds for repairing religious sites and making beachfront areas more desirable for visitors. It includes plans to strengthen private-sector development, regional trade, education with a focus on empowering women, and even funding for arts and athletics. Perhaps the most controversial are projects to  strengthen rule of law, government accountability and transparency, and build up civil society.

The Palestinian Authority rejected the plan and the conference outright. Lebanon also boycotted the conference, citing the portion of the proposal which includes funding for the permanent settlement of Palestinian refugees in their country, which currently number somewhere around 175,000. Jordanian officials did attend the conference so they “wouldn’t be left out of the room”, but a former senior Jordanian politician noted that “This is an unbalanced approach” which “assumes the Palestinians are the more vulnerable side and they are the ones who can succumb to pressure more easily.”

Unfortunately, the Palestinians are by far the more vulnerable side in the conflict with Israel, and are in desperate need of the developments this economic proposal entails—critical elements for a Palestinian state to be self-sufficient once the occupation ends.

The United States has long been perceived as a biased peace broker due to its close relationship with Israel. The Trump Administration shattered any remaining hope among Palestinians for a U.S.-led peace deal when President Trump officially recognized Jerusalem as the capital of Israel in 2017 and moved the U.S. embassy there, handing Israel a major bargaining chip which could have been used as leverage in a negotiation. And in March 2019, President Trump recognized the Golan Heights as Israeli territory, despite that it is land illegally confiscated from Syria according to international law. In gratitude for his support, Prime Minister Netanyahu thanked Trump in a ceremony dubbed a “PR stunt,” unveiling an enormous sign marking the site of a new planned settlement in the Golan Heights to be named “Trump Heights.”

The Trump Administration is unlikely to release its political proposal for a peace plan until after September elections for prime minister in Israel as a favor to Netanyahu, who is already in danger of losing the election due to domestic problems without also having to contend with the problem of resolving the conflict with Palestine.

“First lift the siege of Gaza, stop the Israeli theft of our land, resources and funds, give us our freedom of movement and control over our borders, airspace, territorial waters etc.,” Hanan Ashrawi, a senior Palestinian official, declared on Twitter. “Then watch us build a vibrant prosperous economy as a free and sovereign people.”

Read Churches for Middle East Peace’s statement on Peace to Prosperity at http://bit.ly/2019PeacePlan