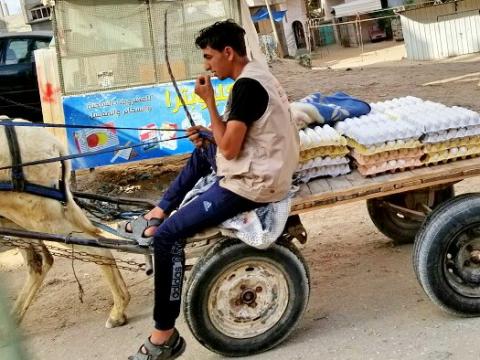 Since March 30, Israeli forces have killed 118 Palestinians, including 14 children, and wounded 3,895 with live gunfire as protesters engaged in weekly demonstrations at the border fences separating Gaza and Israel. The following article was published in the July-August 2018 issue of NewsNotes.

The “March of Return” protests at the Gaza border fence aimed to draw attention to the 11-year blockade of Gaza and to demand the right of return for Palestinian refugees, many of whom now living in the Gaza Strip. May 15 marked the 70th commemoration of the Nakba, the “catastrophe” resulting from the creation of the State of Israel which forced approximately 750,000 Palestinians to flee their homes.

The resulting injuries and deaths of residents of Gaza demonstrating near the fence in recent weeks by Israeli military forces have been called war crimes by some leading international human rights experts.

The culmination of the “March of Return” was moved up one day to May 14 to protest the celebration marking the opening of the the new U.S. embassy in Jerusalem, the fulfillment of a campaign promise made by President Trump which has been decried by the international community as an impediment to final negotiations between Israel and Palestine. While Prime Minister Benjamin Netanyahu’s military forces killed over 60 people in Gaza the day of the dedication of the new embassy, he inexplicably declared it “a great day for peace.”

On June 13, Human Rights Watch released a report titled, “Israel: Apparent War Crimes in Gaza,” detailing interviews with witnesses to Israeli forces’ killing of civilians. In the report, Human Rights Watch concluded “Israeli forces’ repeated use of lethal force in the Gaza Strip since March 30, 2018, against Palestinian demonstrators who posed no imminent threat to life may amount to war crimes.”

First, the UN General Assembly pass a resolution calling for the protection of Palestinians in Gaza and support for the UN Human Rights Council’s formation of an international commission to investigate abuses in occupied Palestinian territory, including which specific Israeli officials instructed soldiers to use live fire against protesters.

International human rights standards, which govern the use of force outside of active conflict laid out in the UN Basic Principles on the Use of Force and Firearms by Law Enforcement Officials, prohibit the use of live gunfire except in cases where there is “the imminent threat of death or serious injury” and “only when less extreme means are insufficient to achieve these objectives.” Despite these international standards, the Human Rights Watch report notes that Israeli officials explicitly approved the use of live ammunition against protesters attempting to breach the fences which divide Gaza from Israel.

According to the report, “the use of live ammunition cannot be justified by automatically deeming every Palestinian who attempts to breach the fences to be an imminent threat to life, and in fact Israeli forces also shot medics, journalists, children, and others who were hundreds of meters away from the fences.”

The spokesman for the UN high commissioner for human rights, Rupert Colville, echoed this sentiment when he said: “The mere fact of approaching a fence is not a lethal, life-threatening act, so that does not warrant being shot.”

On June 13, the UN General Assembly passed a resolution calling for the protection of Palestinians in Gaza which “deplores the use of any excessive, disproportionate and indiscriminate force by the Israeli forces against Palestinian civilians…including the use of live ammunition against civilian protesters, including children,” and further “demands that Israel, the occupying Power, refrain from such actions and fully abide by its legal obligations and responsibilities.” It also asks the Secretary General to make recommendations for ensuring protection of the Palestinian civilian population under Israeli occupation within 60 days.

The resolution was first introduced by Kuwait before the UN Security Council on June 1 but failed to pass because of a veto by the United States. The U.S. attempted to amend the resolution before the General Assembly to include strong language condemning the actions of Hamas against Israel but the amendment failed to receive enough votes and was not adopted.

The resolution that did finally pass “deplores the firing of rockets from the Gaza Strip against Israeli civilian areas,” but does not name Hamas as the perpetrator of such actions.

Photo: Vendor selling eggs by donkey cart in Gaza on April 24, 2018 by Gerry Lee/MOGC. Read Gerry Lee's article about his 24-hour visit to Gaza in April.