Impacts of COVID-19 in East Africa 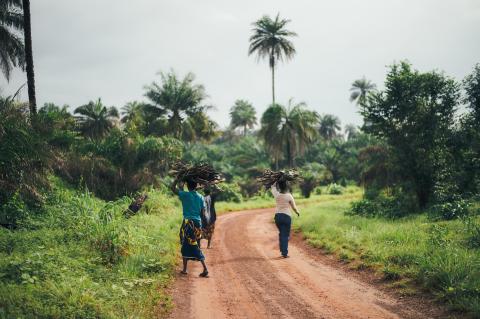 The International Organization for Migration reports on the challenges faced by migrants and forcibly displaced populations in the East and Horn of Africa due to COVID-19. The following summary and link to the full report are available at ReliefWeb: https://bit.ly/2U0Nk1o. This article was published in the July-August 2021 issue of NewsNotes.

Already home to some of the most vulnerable populations globally, the East and Horn of Africa (EHoA) has seen additional displacement and challenges during the COVID-19 pandemic, with nearly 9 million people internally displaced by the end of 2020 alongside an estimated 5 million refugees and asylum- seekers. The pandemic has further challenged the situation for the populations on the move in the EHoA, a region that is already weakened by conflict, insecurity, extreme weather conditions, climate change and pests.

The control measures put in place since the onset of the COVID-19 pandemic have had an unprecedented impact on human mobility, affecting the lives of societies at large and, in particular, of those communities depending on mobility for their livelihoods. While COVID-19 started spreading globally since the beginning of 2020, the outbreak became concerning in the EHoA region around mid-March.

Although the pandemic has reshaped the regional migration landscape and significantly disrupted cross- border mobility, migration did not cease. The overall movements in 2020 decreased by over a quarter compared to 2019, and were mainly concentrated within the Horn of Africa and less along the Eastern Route via Yemen towards the Arabian Peninsula. COVID-19-related restrictions led to an increase in the use of more risky smuggling services and to a change in migration routes, but also pushed thousands of migrants to be stranded across the region, unable to continue their journey or return home. Additionally, the region witnessed a surge in spontaneous returns of migrants from Yemen to Djibouti and Somalia by sea using the same network of brokers used to travel to Yemen.

Millions of people, particularly those living in urban areas, have lost their livelihood and income opportunities due to COVID-19, while the closure of schools has affected school feeding programs in several countries. Similarly, global lockdowns and restrictions led to regional supply and demand shocks, affecting market functionality as well as food availability and access, which in combination with a decline in global remittances and high food prices, have eroded households’ purchasing power.
An increase in return migration has been observed, as jobs and income opportunities shrank in destination countries. Many returning migrant workers were headed home empty-handed and required extensive support for their reintegration, placing significant pressure on home communities. COVID-19 has also severely challenged the flow of remittances across the region owing to migrants’ job loss, bank closures, border closures, but also because of friends and relatives losing their jobs abroad and not being able to send money as they used to.

The food security situation in the EHoA deteriorated significantly during the year. Sudan, Ethiopia and South Sudan were among the 10 countries with the worst food crises globally. Especially dire was the situation in South Sudan where 108,000 people in Pibor were found to be facing catastrophe food security outcomes. The escalating conflict in Tigray in Ethiopia remains of greatest concern as the crisis has made more than 350,000 people food insecure. Additionally, there were concerning levels of acute malnutrition in the region, while Burundi had one of the highest levels of chronic malnutrition globally. In total, some 54 million people were estimated to be acutely food insecure in the region in 2020, and given the continued impact of COVID-19 on the economy and livelihoods, this number is projected to remain at high levels in 2021.

The level of vulnerability of displaced populations has further increased during the pandemic on account of reduced funding for humanitarian operations leading to food ration cuts for refugee populations in Djibouti, Ethiopia, Kenya, Rwanda, South Sudan and Uganda, negatively affecting their food security, nutrition and protection situation.

As elsewhere in the world, gender-based violence as well as tensions with host communities and instances of marginalization and discrimination have increased across the region. The safety and well-being of children has also been exacerbated by the widespread closure of schools, especially affecting those from vulnerable communities for whom schools offer a safe space. Millions of children have been unable to access any form of formal education, and many have been forced into child labor, sexual slavery, trafficking, or recruited into armed forces.

The existing risks of irregular migration worsened with the pandemic. The Eastern Route was already risky, as migrants’ travel conditions in the Horn of Africa and while crossing the Gulf of Aden are fraught with danger and hardship, with reports of smugglers throwing migrants overboard to reduce the risk of capsizing when seas are rough.