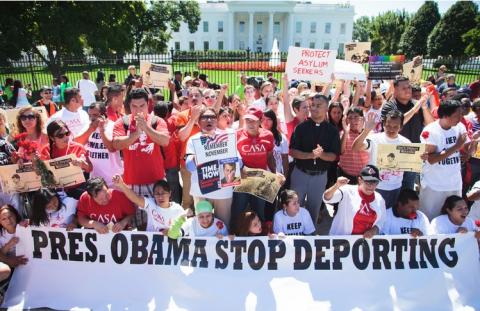 The following article was written by Alfonso Buzzo, Peace Fellow with the Maryknoll Office for Global Concerns, and published in the July-August 2016 issue of NewsNotes.

Families and thousands of children, many of them unaccompanied, are coming to the U.S. to escape death in Guatemala, Honduras, and El Salvador in the form of sexual exploitation, forced gang conscription, corruption, and impunity. The region’s death toll in 2015 tallied nearly 17,500, the highest global homicide rate outside of a war zone. Instead of treating these victims of violence humanely, the Obama Administration emphasizes border security, detention and deportation.

In June the Maryknoll Office for Global Concerns was one of more than 200 faith groups that sent a letter to President Obama asking him to stop deportations and provide "Temporary Protected Status" for these people fleeing violence. Now that the Supreme Court ruled 4-4 on U.S. v. Texas, this request is more pressing than ever. The deadlocked Supreme Court leaves in place an injunction on President Obama’s 2014 executive actions on immigration.

President Obama’s two immigration policies – “Expanded Deferred Action for Childhood Arrivals” (DACA+)  and “Deferred Action for Parents of Americans” (DAPA) – would have granted temporary permission to live and work in the country to more young people who immigrated to the U.S. as children and to undocumented parents of children who are U.S. citizens. The Supreme Court ruling leaves approximately five million people in the shadows of our economy and our communities.

As the leader of the executive branch, President Obama directs how and when raids, detentions, and deportations are deployed. He can make sure that families and communities are kept together by declaring a moratorium on deportations immediately.

Faith in action: Send a letter to President Obama asking him to declare a moratorium on deportations: http://bit.ly/NotoDeport

Photo: More than 100 faith leaders, including members of the Maryknoll Office for Global Concern, participated in civil disobedience during the National Day to Fight for Families, August 28, 2014. Photo courtesy of Church World Service.