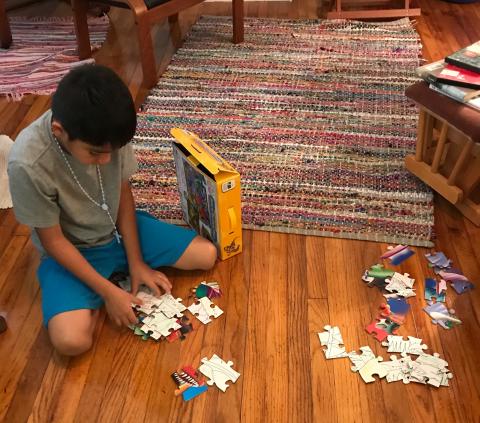 Yvonne Dilling, Mission Educator for the Maryknoll Fathers and Brothers in San Antonio, Texas, recently volunteered to provide hospitality for a mother and son from Honduras who were reunited after having been separately detained by the U.S. government as part of the “zero tolerance” immigration policy. The following article was published in the September-October 2018 issue of NewsNotes.

At the height of the family separation crisis on the Southern border this summer, before judges had forced the Trump administration to suspend the cruelest tactic of its ‘zero tolerance’ immigration policy, Border Patrol agents pulled an eight-year-old Honduran boy away from his mother so they could prosecute her as a criminal, sending the boy alone into a parallel detention system with no plan or method to reunite mother and son.

His mother had been caught crossing the border and deported six years earlier – potentially disqualifying her from the asylum status she so desperately sought. She would now be prosecuted as a felon under zero tolerance. Determined, however, she arrived this time laden with meticulous records of her abuse by the violent partner she was fleeing  – police reports, photos, legal documents, as well as documentation of her identity and that of her son – which might sway a sympathetic judge.

While U.S. immigration officials kept mother and son at different facilities at opposite ends of Texas, denying them any opportunity to speak with one another by phone, those same officials also managed to ‘lose’ all of the family’s documentation, including both of their birth certificates and all of the evidence that might win her asylum.

Whether by negligence or malice, for two months the mother and son tried to call each other but were told by guards that no one on the other end would answer. For the mother, fear of never seeing her son again was magnified by the loss of her crucial documents – her lifeline to asylum and survival. The boy built up resentment against his mother, who, he was told, had not been trying to reach him as he was moved from facility to facility to satisfy the Flores agreement which prohibits holding children in the same detention facility for more than 21 days.

Then, through the lucky intervention of a journalist who had been digging into the devastation caused by zero tolerance, the Honduran mother and son where reunited and were detained together in the Dilly and Port Isabel facilities for nearly two months where officials who had lost their identifying paperwork conducted DNA tests to prove their relationship. Finally, they were released to a community shelter in the Rio Grande Valley run by the Interfaith Welcome Coalition, and, ultimately, to Maryknoll Mission Educator Yvonne Dilling, who shared her home with them until they could locate family sponsors in South Carolina and travel there.

“They got caught in their own lies,” Dilling said of the immigration officials who botched the mother and son’s case from the beginning.

Dilling said it was devastating to see the damage that had been done to the bonds between the mother and child. “The obviously traumatized boy kept asking, ‘why didn’t you call me, Mommy. I was so scared.’” The mother could only promise him she had tried. Instead of legal documents and birth certificates, all that had survived were some 50 drawings the boy made of his experience in detention.

For all the hardships they’ve endured and that lay ahead, Dilling said the boy seems resilient and the mother, “has a lot of fight in her, a lot of wisdom. She’s very skilled and well prepared from the University of Life.”

The tragic story of this small Honduran family is one of thousands from the crisis of family separation that shocked the nation and dominated news over the summer. Under the policy rubric of ‘zero tolerance,’ the current administration cast immigrants as threats to national security without regard to criminal history or intent, demanding criminal prosecution of all who enter the country without permission. The immediate result was thousands of children were taken from their parents during the spring of 2018 and cast alone into a detention system with no plan or method to reunite families – which the government called “deleted family units.”

As summer fades into fall, the U.S. government has had to comply with a court order to reunite the children with their parents. No one has, of yet, been held responsible for inflicting the cruel and unusual punishment of zero tolerance. Families are still separated. Nearly 500 children had still not been reunited with their parents, including 22 children under the age of five, the government reported in court papers filed on August 30.

As Dilling says, it’s far from over: “This is why Catholic social teaching is so important. These traumatized children are going to be in our schools, affecting their playmates and teachers. They will act out. It’s all going to come back to haunt us,” she said. “We learn these things and try to respond with compassion.”

Faith in action: Find ways to respond to the family separation crisis here.