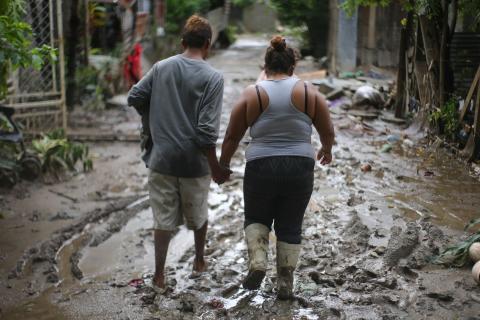 Two devastating hurricanes hit Central America in November, leaving widespread destruction for local communities already struggling from the fallout of the pandemic. This article was published in the January-February 2021 issue of NewsNotes.

After hurricanes Eta and Iota hit Central America in November, experts are worried that their effects could be felt for years, prompting an even deeper economic crisis and more widespread migration north. They also are concerned that this year’s Atlantic storm season – the worst ever recorded – could be only a preview of the intense storm seasons to come, which scientists say are more likely as the global climate continues to change.

Guatemala, Nicaragua, and Honduras were the hardest hit nations, but El Salvador, Panama, Costa Rica, and Belize also felt the hurricanes’ effects. The reported immediate loss of life was at least 200, but the infrastructural and agricultural devastation wrought by the hurricanes will have life-threatening consequences for local communities for a long time. In addition, many people were crowded into shelters to escape the storms, putting them at risk for coronavirus infection.

Approximately 5 million people were affected by the storms, and about half a million have been displaced. Entire towns have been submerged under water and mud. The devastation is being compared to that of Hurricane Mitch in 1998, which prompted mass migration north out of Central America.

“This was harder than Hurricane Mitch (locally) in the sense that the water density was far bigger,” Franciscan Father Alberto Gauci wrote in an email from the Olancho region of Honduras to Catholic News Service after Hurricane Eta passed through. “What happened here was that two big rivers … became one big ocean of water that changed all the map of Olancho.”

Government officials in Central America are admitting that they do not have the resources to manage these disasters and asking for more aid. Devastation in Guatemala alone has been estimated at about $740 million –  about 6 percent of the country’s GDP.

The Washington Office on Latin America has called the relief initiatives so far “slow and inefficient” and “lackluster.” They urged for more relief given with “significant oversight and control mechanisms, and transparency to guarantee that aid is efficiently and appropriately used…[and not] embezzled.” They explained that corruption has stymied the regional response to the pandemic from reaching those who need it most.

In a November 25 statement, the Latin American Bishops’ Conference (CELAM) called for a campaign among Catholics to redouble aid efforts, urging a day of prayer and action on December 12, the feast of Our Lady of Guadalupe.

Besides immediate aid efforts, experts say the region and global community need to prepare for the long-term, given the ever-growing threat of climate change and the likelihood of increasing intensity of storms.

The exact effect of climate change on storms such as these is difficult to pin down, climate scientists explain. The number of storms is not so much the measure of changes in patterns due to climate change, but rather the way storms behave. Research is showing that climate change is making storms more deadly, causing them to warm faster in oceans, linger longer over land, and drop heavier rains.

“The evidence is building that there is a human fingerprint on this behavior,” Jim Kossin, climate scientist with the National Oceanic and Atmospheric Administration, told Reuters, speaking of the ways storms are occurring.

“If we don’t manage to contain global warming to 2 degrees Celsius, we can expect an intensification of such natural disasters in the region with increasing costs,” stated Luis Miguel Galindo, a climate change expert and economics professor at Mexico’s UNAM university.

However, Ilan Kelman, a professor of disasters and health at University College London, stressed that this is a two-fold problem – the possibility of more frequent high-intensity storms coupled with the general vulnerability of the population in the region due to poverty and inequity. “Irrespective of how human-caused climate change is affecting hurricanes, Central America does not need to have hurricane disasters, if vulnerabilities are fully tackled,” Kelman said.

Until these issues are addressed, there will be continued pressure to migrate north for people made desperate by the devastation and economic fallout. Advocates in the United States are calling on the incoming Biden administration for a redesignation of Temporary Protected Status for people from the region, which would allow temporary legal avenues to stay in the U.S. for people from areas affected by the hurricanes.

Photo of relief efforts in Central America by the EU Civil Protection and Humanitarian Aid division, available on Flickr.