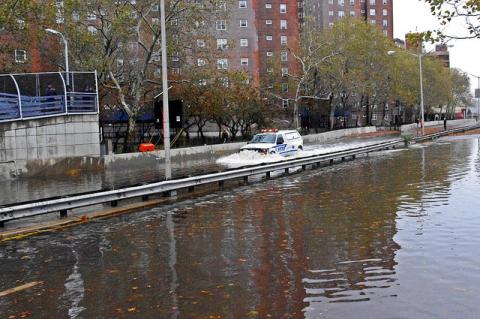 On October 29, Hurricane Sandy, after devastating the Caribbean and mid-Atlantic, wreaked havoc along its path as it swept across the states of New York and New Jersey. As the storm approached, people who lived along the coastal areas evacuated to safer areas but still had to bear the effects of high winds, rain, fallen trees and disrupted electrical gridlines. Some evacuated homes were flooded, washed away or demolished. In a few places power outages lasted for two weeks, leaving people in darkness and without heat. More than a hundred people died as the result of the storm. In addition, the storm’s ferocity heightened the threat of a nuclear accident.

Area nuclear power plants, including Indian Point 3 in Buchanan, NY, Nine Mile Point in Scriba NY, Salem 1 in Hancock’s Bridge, NJ, all shut down because of the danger of flooding. The Oyster Creek nuclear plant in New Jersey was already on a scheduled shutdown. During the hurricane, the Nuclear Energy Institute (NEI) issued a statement assuring the nation that "34 nuclear energy facilities in Hurricane Sandy’s way have responded well to this powerful storm, demonstrating their resilience against severe natural forces." At the time that this statement was circulating, conditions at some of the nuclear plants were deteriorating. An alert had been declared on October 29 warning of high water level intake at the Oyster Creek plant, shut down for refueling. Salem 1 was also manually shut down due to an electrical grid disruption. Nine Mile Point 1 also shut down due to an electrical grid disruption. Similar conditions resulted in the Fukushima nuclear power plant meltdown in 2011.

At the Fukushima Daiichi nuclear plant, the high seawall failed to contain the tsunami waves that breached the barrier and caused a rise in the water level, compromising the cooling system and causing it to fail. David Lochbaum, who directs the nuclear safety project at the Union of Concerned Scientists, sees the attitude of the NEI as similar to "a closed narrow mindedness [that] allowed Fukushima to happen" as he goes on to say that "the risks of nuclear power generation are magnified by the fact that the plants are always located near a river, lake or ocean. That is because producing nuclear power creates a lot of heat, which needs to be dissipated by huge volumes of water. These cooling systems are all that prevents the plutonium in reactor cores from going critical and melting down, much like what happened at Fukushima." For this reason, the fuel needs to be kept cool even when the plant is not actively generating electricity which explains why it takes a long time to decommission a plant especially in those that are plutonium fueled.

The location of nuclear plants near rivers, lakes or oceans, makes them very vulnerable to storm surge, flooding, and sea level rise. Although Oyster Creek, the nation’s oldest facility, had already shut down, high winds, a rising tide, and the storm surge sent more water than normal into the plant’s water-intake system. Therefore, technicians continued to monitor the plant during Sandy.

The effects of the hurricane are a reminder of how natural phenomena are non-negotiable and, when combined with nuclear power, result in accidents that are similar to or could surpass that which was witnessed at Fukushima in March 2011. As a community that upholds the integrity of creation and cares for the environment, we ought to commit ourselves to a lifestyle that is witness to these values. Phasing out nuclear power and replacing it with sustainable sources of energy will help us achieve this goal. (See related story here.)