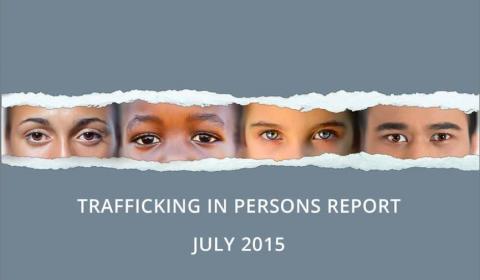 The following article was prepared by Sr. Mary Ann Smith, MM and Sr. Veronica Schweyen, MM who monitor the issue of human trafficking on behalf of the Maryknoll Office for Global Concerns, and was published in the September-October 2015 NewsNotes.

The U.S. Department of State’s 2015 Trafficking in Persons (TIP) report has received more than the usual scrutiny due to ongoing negotiations around the Trans-Pacific Partnership (TPP) involving the U.S. and 11 Pacific Rim nations, and Malaysia’s changing rank on the Trafficking Victims Protection Act (TVPA) compliance list, compiled by the State Department. Previously listed as Tier 3 – a country whose government does not fully comply with the minimum standards for the TVPA and is not making significant efforts to do so – Malaysia has been upgraded to the Tier 2 watch list – not in full compliance yet making efforts to do AND a) the number of victims of severe forms of trafficking is significant or is significantly increasing; b) there is a failure to provide evidence of increasing efforts  to combat severe forms of trafficking in persons from the previous year; or c) the determination that a country is making significant efforts to bring itself into compliance with minimum standards was based on commitments to take additional future steps over the next year.

Malaysia’s Tier 3 status became a problem after Sen. Robert Menendez (D-NJ), bolstered by support from faith, trade, and anti-trafficking advocates, added the “No Fast Track for Human Traffickers” amendment into the final “Fast Track” Trade Promotion Authority (TPA) bill that passed Congress in June. Once the administration and members of Congress understood that this would upset the TPP negotiations, they attempted to remove this text from the final version of the bill.

When that effort failed, advocates believe that they then used political influence to upgrade Malaysia in the TIP report. In a Huffington Post piece (“Key Democrat rails against ‘political interference’ in Obama’s human rights report,” updated July 23), John Sifton, Asia advocacy director at Human Rights Watch, said, “If Malaysia is moved to the Tier 2 watch list, we will view that decision as so extraordinarily unwarranted that political interference can be presumed. ... We would urge Congress to investigate. We would urge the inspector general of the State Department to investigate.”

It is possible that the strong stance against human trafficking in the TPA bill will be weakened if and when Congress goes to conference on the trade customs and enforcement bill, but with this recent upgrade, it will no longer affect the TPP negotiations.

The TIP report has well-deserved respect for its efforts to put the crime of human trafficking on the global agenda. But while questions were raised in the past about designations of certain countries, the recent re-ranking of Malaysia is beyond redemption. Faith leaders and human rights advocates in the U.S. have responded with disbelief and outrage over this upgrade, as recent reports from Malaysia have confirmed 139 mass graves in ”trafficking camps,” forced labor at sea, and trafficking of Rohingya Muslims through its southern jungles.

In his introduction to the TIP report, Secretary of State John Kerry listed many 21st century challenges: extreme poverty; discrimination against women and minorities; corruption and other failures of governance; abuse of social media; and the power and reach of transnational organized crime. He also named those who are complicit in one way or another: the private sector, academic institutions, civil society, the legal community and consumers. But in the end, he said, “governments have a special responsibility to enforce the rule of law, share information, invest in judicial resources and espouse policies that urge respect for the rights and dignity of every human being. Human trafficking is not a problem to be managed; it is a crime to be stopped.” Therefore, upgrading Malaysia to the Tier 2 Watch List at this time calls into question the integrity of this TIP report and reinforces the perception of many religious and human rights organizations in the U.S. that this decision is a political one related to the TPP trade negotiations.

One example of the trafficking in persons crisis is the recent case of hundreds of Filipina teachers cheated out of thousands of dollars by Isidro Rodriguez and his cohorts. With the false promise of a legitimate teaching job in the U.S., each applicant paid more than $12,000 over a period of two years for various fees including, visas, passport and travel.

This type of deceptive entrapment is “labor trafficking” and “debt bondage,” and is defined as “the illegal recruitment with a promise of employment in another country.” Upon their arrival in the U.S. Rodriguez confiscated the teachers’ papers, rendering them “undocumented,” forced into positions as day care aides and domestic servants.

Economic conditions in the Philippines are so dire that thousands of educated Filipinos accept such conditions in an effort to improve living conditions for their families and to provide education for their children.

Clearly Rodriguez had contacts in the Philippines and the U.S., including government offices, embassies, the Philippine Overseas Employment Agency and counterpart employment agencies in the U.S. who helped him generate fake contracts and approve visa applications – these documents were approved by the Philippine Embassy.

According to a February 2015 post on the Migrante International website, “Rodriguez remains at large [and is believed to be in Spain] after having been convicted by a Manila regional trial court sentencing him to 11 years in prison for victimizing a Filipino teacher. He has two existing warrants of arrest against him for illegal recruitment and estafa [fraud]. Aside from the warrants, he has numerous pending cases of syndicated estafa and large-scale illegal recruitment and trafficking in persons filed in different courts by at least 300 Filipino teachers that he had victimized from 2009-2014. He also has pending complaints against him in U.S. courts by Filipino teachers he has victimized there.”