How To Avert a COVID-19 Global Debt Crisis 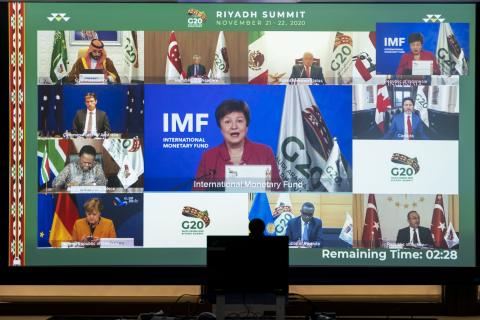 Wider, deeper debt relief and the issuance of Special Drawing Rights are needed to address the global economic crisis during the COVID-19 pandemic. This article was published in the January-February 2021 issue of NewsNotes.

The coronavirus pandemic has forced the majority of low-income countries to choose between servicing spiking sovereign debt or spending more to care for their citizens. Without swift, ambitious action, experts say decades of development gains will be lost, millions of people will fall into poverty, and a catastrophic global famine could hit in the early months of 2021.

Religious and humanitarian organizations with decades of experience in low and middle-income countries have named two actions the G20 nations can take to address a rapidly approaching global debt crisis: expansion of the debt relief plan adopted at the April G20 meetings and issuance of Special Drawing Rights (SDRs) by the International Monetary Fund (IMF).

In April 2020, the G20 launched the Debt Service Suspension Initiative (DSSI) allowing eligible countries to suspend their debt service to G20 countries. So far, the program has delivered about $5 billion in relief to 46 of the 73 countries that are eligible. When the G20 met in November, they extended the plan to mid-2021 and could expand it further.

According to a new report by the Brookings Institution, “Doubtless this [$5 billion] number will increase, but the agreement falls well short of what developing countries owe: $356 billion in debt service on public and publicly guaranteed debt due in 2021, and another $329 billion in 2022. Additional amounts of some $500 billion are also due on private non-guaranteed debt service, amounts that are not yet public liabilities but that, in past debt crises, have become socialized when foreign exchange availability has dried up. In other words, there are significant explicit public debt liabilities and the potential for additional implicit liabilities to arise.”

After the G20 met in November, the religious alliance Jubilee USA Network issued a public statement urging President-elect Joe Biden to convene an emergency G20 meeting upon the start of his presidency on Jan. 20. "One of the most important things that a new President Biden can do is bring together world leaders to more robustly confront the crisis," said Jubilee USA Executive Director, Eric LeCompte.

Debt relief immediately eases public finances and allows governments to spend more on their people. And what is good for low-income countries would be good for middle-income countries teetering toward sovereign debt crisis as well.

The G20 urgently needs to address weaknesses in the debt suspension initiative as well as alleviate the structurally high debt burdens many countries are facing. Some economic experts suspect that eligible countries have been reticent to take the offer to delay debt payments due to fear of losing access to commercial loans if commercial lenders take a poor view of their participating in the program.

Also, the DSSI is only temporary and small; and it does not include private creditors in China which account for roughly 20 percent of the total foreign debt owed by the 73 countries eligible for the DSSI and, in the case of Zambia, China demanded the southern African nation use any relief granted by international financial institutions to repay arrears to Chinese banks.

In a 15-minute video, humanitarian experts from the Africa Faith and Justice Network and other faith groups explain the urgent need for the IMF to issue Special Drawing Rights (SDRs) to members nations. “It is humane to release these funds and save lives around the world,” said Pauline Muchina of the American Friends Service Committee.

SDRs are a type of special international reserve asset created by the IMF to bolster countries’ foreign exchange reserves when they are in weak financial positions. The IMF last issued SDRs in 2009 in response to the global financial crisis.

As an emergency fund held by the IMF, SDRs cost U.S. taxpayers nothing while providing developing countries with needed liquidity that can be used to address urgent food, health needs and social services.

AFJN pressed the need for global economic relief in a public statement issued on September 22, in partnership with the Maryknoll Office for Global Concerns and others. "Foreign aid, debt relief, debt forgiveness, and the issuance of Special Drawing Rights by the International Monetary Fund (IMF), combined with robust transparency measures, will help save lives and the fragile global economy.”

"The global spread of Covid-19 is further evidence that we cannot ignore the fact that we are one global community. It is in the best interest of everyone, including the United States, to participate in a global response to defeat this pandemic.”

Faith in Action: Visit https://globalcovidresponse.org/ to learn more and to send a letter to Congress asking for Congressional direction to the U.S. Treasury to support IMF issuance of SDRs.

Photo by the IMF of the G20 Summit in November 2020, available via Flickr.