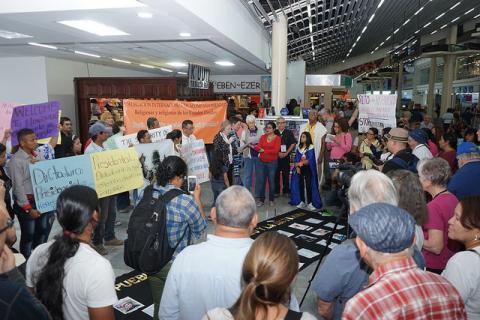 Darrin Mortenson, Migration Fellow for the Maryknoll Office for Global Concerns, joined a delegation of faith leaders and social justice advocates from the United States visiting Honduras January 24–30, 2018 to observe continuing widespread civil unrest and protests in the aftermath of the contested presidential election on November 26. The delegation is in response to requests for accompaniment and international presence from prominent Honduran religious partners who have faced recent threats. The delegates issued the following statement during a press conference upon their arrival on January 24 to share their concerns prior to the presidential inauguration and state their goals and purposes for the emergency delegation.

On behalf of our religious delegation, we would like to thank Radio Progreso, the Equipo de Reflexión, Investigación y Comunicación (ERIC) team, the religious communities and the people of Honduras for inviting us to accompany them during this moment of darkness. Our delegation is composed of 50 representatives from all over the United States. We also have 4 representatives from Canada, Colombia, El Salvador and Argentina.

We come with the spirit of Ruth, who said “your people will be my people” (Book of Ruth 1:16). We come with the spirit of Martin Luther King, of Berta Cáceres, of Monsignor Oscar Romero, and of all the martyrs who gave their lives for peace with justice. Some of us have visited Honduras many times. For some of us this is the first visit. We have been following the recent elections, the growing repression against the popular movement and specific threats against human rights leaders. We come to learn and to stand in solidarity with our sisters and brothers and join them in requesting the following:

1. Stop the violence, Stop the death threats against community leaders of the popular movement and the people of Honduras. Stop the repression.

We ask for a halt to the repression and stop the attacks against defenders of human and environmental rights, the people of Berta Cáceres and all those who are exercising their right to free speech and assembly. Since the November 26 election, more than 30 people have been killed, over 1,000 have been detained, and countless more have been beaten and run over as a result of excessive use of force and attacks against peaceful protests, including the use of prohibited weapons, live bullets, water cannons with chemicals, and gas bombs thrown into homes. Several leaders of the social movement, social communicators and analysts have received accusations that put their lives at risk. As members of the human family and in the name of the God of love and justice, WE DEMAND THAT YOU CEASE REPRESSION. Do not kill human rights defenders, environmental and popular leaders. Do not assassinate authentic democracy and the right of people to raise their voices.

2. Support the popular sector’s demand for a national dialogue towards the restoration of the rule of law.

The various sectors organized in various articulating initiatives agree on a national process that leads to the reestablishment of the Rule of Law, which in fact means reversing electoral fraud and a dialogue that will effectively lead to the creation of the bases for a new institutional framework based on the following conditions: 1. Recognize that recent elections were fraudulent; 2. Bring to justice those responsible for the murders of those who protested peacefully; 3. Immediate demilitarization of public security.

3. The recent presidential election is ILLEGITIMATE.

The recent presidential election was fraudulent in two aspects: 1. The Honduran constitution prohibits the re-election of the current president, and 2. The election itself has been characterized as illegitimate by international observers due to rampant fraud.

4. End U.S. aid to the security state, the military and the police of Honduras, as well as the militarization of the region.

U.S. aid and training to the Honduran security state, the military, and police is sharpening the crisis in Honduras and the region and encouraging the violation of human rights in Honduras and across the region. It is one of the root causes of mass migration. Further militarization combined with mass deportations threaten to destabilize Honduras and the region and risk a return to the devastating Civil Wars of the 1980s. Those U.S. sponsored wars cost thousands of lives, displaced millions of families from their homes, and led to the dramatic exodus of Central Americans to the United States.

The United States must avoid the mass deportation of Hondurans and Central Americans in the U.S. The political earthquake in combination with the structural, political and social crisis facing Honduras and the region makes the deportation of thousands of Central Americans politically and morally unfair. The separation of U.S. citizen children from their immigrant mothers and fathers is antithetical to the principle of family reunification, a bedrock principle of U.S. immigration policy for the last half century that is now under siege. The U.S. foreign policy is forcing Honduran families to flee their sacred land, only to be deported.

We call on our U.S. government to withdraw its recognition of the fraudulently elected government in Honduras; to demand that those responsible for the murders during the demonstrations that have taken place from November 27 to the present be investigated and brought to justice; to cut off aid to the police and the army of the State Security Forces of Honduras; and to stop the deportations.

7. Pledge of ongoing support for peace with justice and democracy in Honduras.

We pledge our ongoing love and solidarity with the people of Honduras, the human rights and environmental rights’ defenders, and our religious counterparts;
We commit to ongoing accompaniment to all members of Radio Progreso and ERIC and through them, to diverse Honduran community and social organizations;
We are committed to informing and mobilizing our elected leaders, the media, our faith communities, our families, neighbors and friends.

Image: Press conference by Emergency delegation, Honduras, January 24, 2018 by Mark Coplan. This photo and more from the delegation are available at Flickr/Emergency Delegation to Honduras.

Origin of the 52 delegates from the United States: