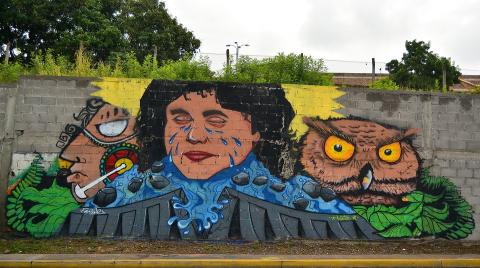 June 28, 2019, marked the tenth anniversary of the U.S.-backed coup in Honduras that ousted democratically elected President Manuel Zelaya and unleashed a new chapter of violence in the Central American nation. Now, a decade later, Hondurans join waves of Central American refugees in fleeing the drug and gang violence that is plaguing their nation. The Maryknoll Office for Global Concerns joined 13 organizations in issuing the following statement to the governments of the United States and Honduras on June 27. The following article was published in the July-August 2019 issue of NewsNotes.

Read the PDF version of the letter

To the Honduran Government: Stop Killing and Wounding Protesters
To the U.S. Government: Denounce the Abuses by Honduran Security Forces

Over the last several weeks, Honduran security forces have killed and wounded teachers, students, health care workers and other Honduran citizens protesting cuts to the health and education system. At least four students were injured by bullets on June 24 as the Military Police stormed the National Autonomous University of Honduras, violating its autonomy. Seventeen-year-old Eblin Noel Corea Maradiaga was shot in the head and killed on June 19 as police and soldiers fired into a crowd protesting in Yarumela, La Paz. Jesus Ariel Sánchez Osorio, a young teacher, was killed on May 31 by a shot to the head as police fired on protesters in Villanueva, Cortes. In many other incidents across the country, security forces harmed protesters by shooting live bullets and indiscriminate use of tear gas. This repression must stop now.

We urge the Honduran government to: order all security forces to end immediately excessive use of force against protesters; withdraw military and Military Police from responding to any protests; disband the Military Police; ensure government agents end any threats and abuse against human rights defenders and journalists; and ensure cases against state agents for these abuses are promptly investigated and prosecuted.

We urge the State Department to: call on the Honduran government to end excessive use of force, respect the rights of Hondurans to protest, defend rights and report on the news, disband the Military Police, and ensure justice for human rights crimes. We call on the U.S. Embassy in Honduras to end its all-too-often deafening silence and publicly, regularly denounce the abuses taking place.