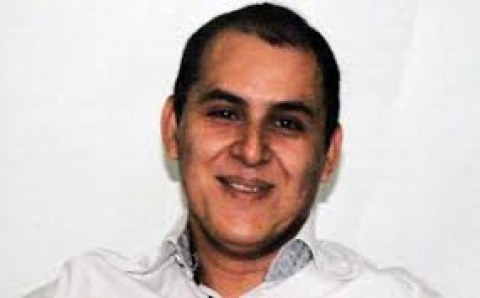 On April 11, Carlos Mejía Orellana, a radio journalist and staff member at the Jesuit-sponsored community radio station Radio Progreso, was attacked and stabbed to death in his home in the town of El Progreso. In its 2013 report on Honduras, the Committee to Protect Journalists noted: "The Honduran press continued to face violence and intimidation as the country struggled with pervasive crime and general lawlessness. Journalists who covered sensitive topics like drug trafficking, government corruption, and land conflicts were threatened and attacked." Mejía Orellana was precisely one of those journalists with the courage to investigate and report on subjects that put himself and the team at Radio Progreso at risk. The following piece was published in the May-June 2014 NewsNotes.

Radio Progreso is directed by Fr. Ishmael Moreno, a Jesuit priest known as Padre Melo. Founded by the Jesuits over 60 years ago, the station has long been fiercely independent and unafraid to criticize elected officials on both sides of the ideological divide. Padre Melo has guided the radio station through threats and occupations since the coup d’état in 2009 that overthrew President Manuel Zelaya. Radio Progreso diligently reported on the coup and the abuses committed by the authorities against protestors. As a result, in the days following the coup, the military raided the radio station and stopped it from broadcasting.

Although Radio Progreso was permitted to resume broadcasting shortly after the raid, Padre Melo has said that 15 Radio Progreso employees have received death threats since the 2009 coup. In fact, the Inter-American Commission on Human Rights (IACHR) had issued precautionary measures on four separate occasions over the last five years to protect the staff of Radio Progreso from death threats and intimidation. Three of IACHR recommendations for protective measures included Mejía Orellana (pictured), the last one coming in 2011.

At play in this murder are a number of overlapping concerns. First and foremost is the disconcerting continuation of high levels of violence that pervade Honduran society. Far from being isolated to drug trafficking and gang-related violence, the elevated murder rate and the Honduran government’s inability to curb violence and impunity has led to a situation in which political vendettas are settled with murder rather than through democratic practices. Journalists who dare criticize the Honduran government and the upper echelons of power in the country are at risk precisely because they have the courage to engage in the fundamentals of democracy - working to inform the public.

Padre Melo explained that the murder was far from a random attack against a citizen, but rather was a deliberate attempt to silence a brave journalist and institution that spoke out against human rights violations: "This criminal action against our team member Carlos Mejía Orellana is a blow to our work, our institution and we denounce this murder; it threatens our right to freedom of expression, communication, and the lives of each and every member of our team."

In a condemnation of the Honduran government’s failure to protect journalists such as Mejía Orellana, U.S. Reps. Jim McGovern (D-MA), Sam Farr (D-CA), and Janice Schakowsky (D-IL) and Sen. Tim Kaine (D-VA) released statements extending condolences to the friends and family of Mejía Orellana as well as strongly urging Honduras to actually investigate and bring to justice the perpetrators. In the immediate aftermath of the murder, the police announced that it was likely a "crime of passion," suggesting that they were ruling out the likelihood of political motivations. Such posturing indicates that the police were uninterested in searching for the likely intellectual authors behind this attempt to silence the journalists at Radio Progreso.

As Sen. Kaine concluded in his statement, "Honduran police failed to protect Carlos, despite repeated requests to do so from the Inter-American Commission on Human Rights. The police need to take immediate steps to protect Carlos’s surviving colleagues at Radio Progreso and its research arm, ERIC, who also live under constant threat." As we work toward building a more peaceful Honduras, the journalists who work day after day to bring the truth to the public must be protected and valued members of Honduran society.