Honduras: People and democracy are dying 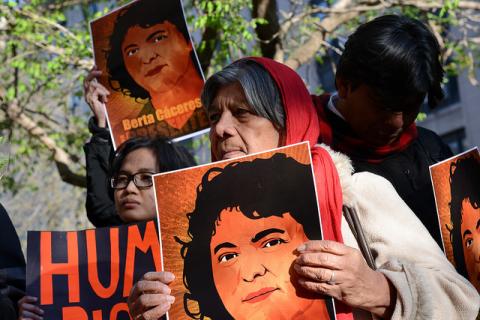 The disputed presidential election on November 26 has led to ongoing violent demonstrations throughout Honduras. The future of the government of Juan Orlando Hernandez and democracy itself in Honduras is in question. The following article was written by Darrin Mortenson, MOGC migration fellow, and published in the January-February 2018 issue of NewsNotes.

Over the Christmas week mass protests still raged across Honduras and state forces escalated violent repression of the popular uprising a full month after the contested Nov. 26 presidential election that left U.S.-backed strongman Juan Orlando Hernandez in power for a second term. As military police attacked demonstrators with tear gas and live rounds at barricades and in the streets, powerful international forces – most notably the United States, the European Union and Mexico – have lined up behind the Honduran electoral commission’s Dec. 17 confirmation of Hernandez as the winner. Their endorsements come despite calls for new elections by the secretary general of the Organization of American States, whose election observers documented evidence of widespread fraud.

While the U.S. failed to officially recognize state repression and called for calm, officials from the UN and the Inter-American Commission on Human Rights denounced the Honduran state’s violent repression of popular uprising in the election’s chaotic aftermath that has left nearly 1,000 detained and dozens dead.

International human rights and religious groups and more than 60 members of the U.S. Congress have called for a suspension of U.S. military and police assistance and freezing funds contingent of compliance with the human rights conditions certified by the State Department. But every day that Hernandez acts as president with the blessing of the United States is another day lost to hopes for a new poll, social stability, and legitimate democratic rule.

The Maryknoll Office for Global Concerns and twelve civil society organizations sent a letter to the Organization of American States to commend and thank Secretary General Luis Almagro for calling for new elections in Honduras in order to ensure legitimacy and promote democratic reconciliation. Read the letter in English , Spanish.

“By averting it’s eyes from what happened in Honduras, the Trump administration is signaling to the region that it is willing to overlook threats to the democratic process when dealing with an ally,” Adriana Beltran  from the Washington Office on Latin America wrote in a statement on Dec. 22. “This was an opportunity for the United States to send a strong message that deeply flawed elections and the repression of peaceful protests are not acceptable. Instead, Washington has chosen to ignore human rights and democracy.”

For months before the recent vote and ongoing turmoil, broad-based opposition coalition, Opposition Alliance Against the Dictatorship, had warned that Hernandez would try to steal the election. Election night irregularities proved them right. Opposition leaders quickly urged people into the streets to decry ballot stuffing, military intimidation at the polls and a suspicious crash of the computerized tally when it showed opposition candidate Salvador Nasralla leading Hernandez by an insurmountable five-percentage points. The night was followed days of rage. The government declared a martial law with dusk-to-dawn curfews enforced by Hernandez’ handpicked national military police who killed, wounded and rounded up more protesters each night.

A partial recount and the Dec. 17 announcement of a Hernandez win failed to settle the streets. On Dec. 20, election observers from the UN and the Inter-American Commission on Human Rights (CIDH) denounced abuses by the Honduran armed forces, citing the “illegal and excessive use of force to break up protests, which have resulted in the deaths of at least 12 demonstrators, dozens of injuries and hundreds of prisoners, many of whom were taken to military installations, where they have been brutally beaten, insulted and subjected to torture and other cruel and inhumane treatments and degradations.” The UN observers also reported of attacks on the media, including the sabotage of Radio Progreso towers in Tegucigalpa on Dec. 9., which temporarily silenced the Jesuit-run station that has provided a voice for poor and oppressed communities since 1980 and has become a vital voice the popular resistance since the 2009 military coup.

As military police fired live ammunition into crowds furious over a stolen election, one well-known Radio Progreso voice made a desperate plea for help. “Help us please, for God’s sake and for the love of this anguished people!” wrote Jesuit Father Ismael “Melo” Moreno by communiqué after Hernandez loyalists sabotaged the station’s transmission gear. “Help us to free ourselves from this man and this group. They are a real threat to our lives!!!” he said. “Today is still time, once again in power it will be too late for us!!” In the days since Padre Melo’s plea, hope for such deliverance has dimmed.

The current crisis – and weak U.S. response – is familiar to most Hondurans who survived the tumultuous aftermath of the military coup that forced popular president Jose Zelaya from power in 2009.  Many draw a clear line between that coup and now. Then, the Obama Administration dragged its feet before condemning the coup, which was supported by leftover Cold Warriors and determined Drug War zealots in the government and U.S. Southern Command. By the time Obama’s team tepidly sought Zelaya’s return to power, the post-coup government was already deeply entrenched and busy stacking the deck. Then Secretary of State Hillary Clinton later admitted the U.S. made sure that Zelaya would not return to office. Clinton wrote in her memoir “Hard Choices” that, “We strategized on a plan to restore order in Honduras and ensure that free and fair elections could be held quickly and legitimately, which would render the question of Zelaya moot.” Many in and out outside of Honduras see that same cynical strategy at work today and harken back to the aftermath of the 2009 coup for clues for what happens next.

Empowered by U.S. tacit support, the coup’s successors further militarized the country to blunt popular resistance. Subsequent post-coup administrations willingly satisfied U.S. national security goals in return for a flood of fresh funding and political cover for their domestic power and resource grab. Since his election in 2013, Hernandez has purged state institutions and courts of opposition and stacked them with friends, including five Supreme Court justices who in 2015 struck down an article in the Honduran constitution prohibiting a sitting president from seeking another term – setting the stage for the current crisis. Some of the same coup-plotting generals, who had justified their actions as necessary to prevent then-President Manuel Zelaya from seeking re-election, are now carrying out Hernandez’ commands to bring order to the streets.

Why has Washington again “turned a blind eye” to the shift away from democracy in Honduras, asked journalist Silvio Carrillo in a Dec. 19 editorial in the New York Times. Carrillo, a nephew of slain indigenous activist Berta Caceres, whose 2016 killing has been linked to Honduran security forces, answered the question himself: “Perhaps the Trump Administration, like the Obama administration before it, believes Mr. Hernandez to be good for Honduras and American interests there,” he said. Carrillo and other Honduras observers cite the Soto Cano military base just outside the capitol, Tegucigalpa, a key hub of the U.S. drug war operations and only major US base left in the region. Other interests include huge mining, energy and agro-industrial operations and efforts to stem US-bound migration, all priorities that have increasingly come before the needs and desires of the people of Honduras.

Despite the bloodshed, despite the possible long-term damage to democracy in Honduras, and despite the dangerous message it sends to other Latin American leaders who seek to hang onto power, those interests keep Honduras in turmoil and the U.S. standing firmly by Hernandez’ side.

Faith in action: Call your Members of Congress and urge them to contact the Department of State and the U.S. embassy in Honduras and demand they:

Photo: After the hearing on the human rights situation in Bajo Aguán that took place at the IACHR on April 5, 2016, a vigil was held at the doors of the OAS for Berta Cáceres, murdered on March 3, 2016 in Honduras. Commissioners and Commissioners of the IACHR came to the door of the OAS to listen to the words of their daughter, Berta Zúñiga Cáceres. Photo by Flickr/CIDH.