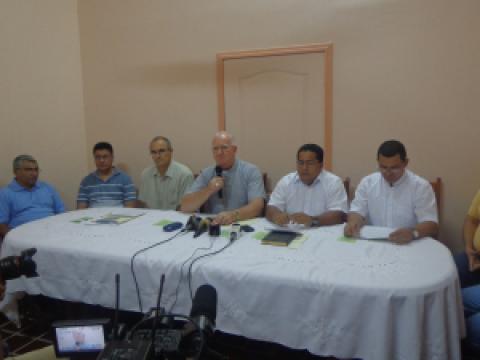 We write to express our concern over a serious human rights situation in the Florida district of Tela municipality, in Atlántida, Honduras.

Communities in the Florida district, especially the community of Nueva Esperanza, have lived over the past year with threats of violence and intimidation from representatives of a mining company. The situation escalated in late May 2013 when the mining company, Minerales Victoria, attempted to bring mining machinery onto land owned by community members, escorted by members of the Honduran police. Since then, armed men have intimidated community members. Two community leaders in Nueva Esperanza were granted precautionary measures in October 2012 by the Inter-American Commission on Human Rights due to death threats.

On July 25, 2013, two international human rights accompaniers with the Honduras Accompaniment Project (PROAH), deployed to the area in light of the threats against community members, were abducted and held captive for 2.5 hours in the community of Nueva Esperanza by seven armed men. The men are believed to guard the mining operations of Lenir Perez, the owner of Minerales Victoria.

The abduction of these international accompaniers follows incidents in which community members were intimidated and priests accompanying the community as well as journalists covering the story on radio shows were threatened. On June 26, the Catholic Diocese of La Ceiba issued a public statement denouncing the conduct of police and state security forces and threats against the religious workers of the Nuestra Señora del Pilar de Arizona Parrish, in particular Fr. Cesar Espinoza, who have accompanied these communities. The Diocese also expressed concern about the human and environmental impact of "the avalanche of mining projects" in the region and the frequent lack of consultation and consent, required under the General Law of the Environment, with affected communities.

We request that the State Department make a public statement of support for the work and mandate of national and international human rights defenders, and urge the Honduran government to take the following steps:

This situation is just one example of a disturbing trend in Honduras in which companies and land owners appear to be using private security forces to pressure communities to sell land or permit resource exploitation, often apparently with the complicity or tacit consent of state actors. We would greatly appreciate the State Department’s assistance in urging these measures to address this specific situation as well as in encouraging respect for human rights, protection for human rights defenders and strengthening of the rule of law in Honduras.