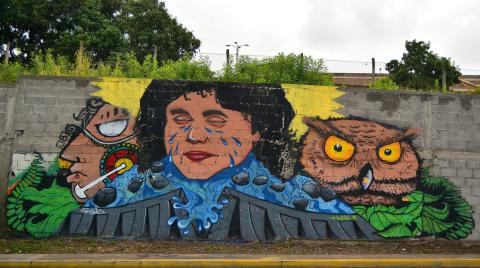 The Maryknoll Office for Global Concerns issued the following statement on May 4, 2018.

The Maryknoll Office for Global Concerns is deeply disappointed in the Trump administration’s decision not to extend protection for Hondurans in the United State under the Temporary Protected Status (TPS) program. We call on Congress to step in immediately and create a permanent solution for Honduran TPS holders.

TPS allows immigrants from a short list of countries to live and work in the United States due to extraordinary circumstances in their countries of origin, such as war or natural disaster. Honduras received its TPS designation in 1998, in the wake of Hurricane Mitch. Life in Honduras has been difficult as the country recovers from that disaster and disasters since – and has only grown more difficult since the disastrous presidential election last November.

To forcibly deport or drive into the shadows 57,000 Hondurans who are legally living, working and raising children in the United States under Temporary Protected Status is a grave injustice.

The cruelty of ending TPS for this vulnerable population at this time of serious political and social crisis in Honduras violates our values as people of faith and betrays the best and most traditional values of the United States. This is the sixth time the Trump administration has terminated TPS for legal immigrants despite its obligation under the law to consider whether the receiving countries can handle the safe return of tens of thousands of people.

Honduras today is not prepared to meet that test for the 57,000 people who rely upon TPS.

At a time when Hondurans are fleeing in caravans to seek asylum in Mexico and the United States and asylum applications are at record highs, when one in six Hondurans relies on foreign remittances, and when the apprehension of Hondurans at the border is up by two-thirds since the first of the year, ending TPS now is sure to cause more harm in Honduras and here in the U.S. by killing opportunity, destroying livelihoods, and overturning families.

Honduras is still recovering from massive flooding caused by Tropical Storm Hanna in 2014. The nation’s public hospitals are struggling to care for the thousands of people who have fallen ill due to two mosquito-borne diseases that have thrived since that climate change-driven natural disaster.

Honduras is also dealing with a catastrophic drought which has led to crop failures, food insecurity, loss of employment and economic depression. The country ranked No. 3 in the world on Bonn-based NGO Germanwatch’s list of countries most affected by climate change between 1997 and 2016.

It is too dangerous for Hondurans to return.

Even the State Department is advising U.S. citizens to reconsider travel to Honduras because violent crimes like homicide, robbery, gang activity, extortion, rape and human trafficking are common and widespread. The instability and violence related to the deepening political crisis only compound the dangers. The forced return of tens of thousands of people will only further destabilize Honduras and exacerbate regional instability that’s led to the migration crisis.

We call on Congress to take immediate action and create a permanent solution for Honduran TPS holders.