Homily for the World Day of Migrants and Refugees 2020 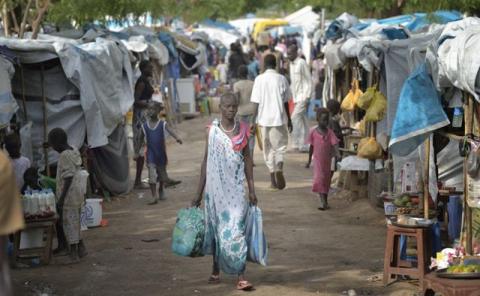 The following homily was prepared by Fr. Joseph Healey, MM, for the Missio International Catholic Mission Society in Aachen, Germany, in collaboration with the South Sudan Catholic Refugees community in Small Christian Communities (SCCs) in the Archdiocese of Nairobi, Kenya. The quotations from South Sudanese IDPs were carefully translated into English and German from the Nuer language.

Meet Mrs. Teresa Nyaneng, a Catholic who was an internally displaced person from the Unity State under Malakal Diocese in South Sudan. She was driven out of her home in a village in Malakal because of tribalism and ethnic conflicts. These South Sudanese people suffered without food to eat and were bitten by mosquitos and got malaria. Many were killed by the soldiers. Teresa relocated to UNMISS, a camp for IDPs in Juba Archdiocese. She says, “Our voices are not heard. It seems that the leaders of churches in the world do not understand our suffering. Also, we do not understand why we are not getting help. The problem lies with our grassroots communities and their leaders. The ethnic conflict has taken seven years now and we are living at the mercy of the IDP camps in South Sudan.”

Meet Mrs. Martha Achayo, a Catholic who was an internally displaced person in Torit Diocese in Eastern Equatoria in South Sudan. The local people suffered from hunger. Their crops were stolen. Their houses were looted.  She says, “The farmers (agriculturalists) verses herders (pastoralists) ethnic conflict started before independence in 1991 and has continued up to today. We have been IDPs from the time when Dr. Susan Nagele of the Maryknoll Lay Missioners came to Torit Town [in the early 1990s]. No solution has been found because pastoralists invaded our homeland, including our properties and land. We had to flee. Some of our people went to Uganda and others are still living as IDPs in different parts of Torit up until now.”

In today’s Gospel from St. Matthew we meet some of the marginated and those on the periphery of society in Israel 2,000 years ago. These included tax collectors like Zacchaeus, who were despised and hated by the Jewish people, and prostitutes like the woman caught in adultery, who were looked down upon and even stoned by the Jewish authorities. To the chief priests and elders of the people Jesus Christ said, “Truly I tell you, the tax collectors and the prostitutes are entering the kingdom of God ahead of you.”

In reflecting on this gospel, the South Sudan Catholic Refugees who belong to Small Christian Communities (SCCs) in Nairobi Archdiocese, Kenya, pointed out that we must accept the reality that we are all sinners. We need to confess our failures to God and to each other. As South Sudanese living in the diaspora we can be overly proud like the chief priests and elders of the people. We can be guilty of hatred, tribalism, nepotism, discrimination and selfishness.

We need to forgive others as in the Parable of the Prodigal Son. This means forgiving the offenders during our time in Urban Refugees Settlements or as asylum seekers in capital cities in Africa.  We should follow Jesus’s teaching in Matthew 5:23-24: “Therefore, if you are offering your gift at the altar and there remember that your brother or sister has something against you, leave your gift there in front of the altar. First go and be reconciled to them; then come and offer your gift.”

During their reflections several South Sudanese refugees pointed out, “A Christian must understand the people whom you have forgiven, and expect positive results of forgiveness in you. In time you will be able to think about the people who offended you without feeling hurt, anger or resentment. Thank God for the lessons you have learned and the maturity and patience that you have gained as the results of the offences and your decisions to forgive the offenders during your lifetime in Urban Refugees Settlements.”

Today Jesus asks us to be his voice to speak and have courageous conversations with the marginated and those on the periphery of society in today’s world – including IDPs, refugees and migrants – and invite them to “seek first the Kingdom of God.” By our words and our lives we preach that there is “Good News in Bad News Situations” in the world today. Jesus says: “In the world you will have trouble/tribulation/suffering, but take courage, I have overcome the world.” And, "I am with you always, even until the end of the world.”

Today Jesus asks us to be his hands to reach out in loving and compassionate service and care to all the needy. Catechist Simon Reat Mar, a South Sudanese refugee in one of the Nairobi SCCs, said, “By God’s plan for humanity, and especially as urban refugees or asylum seekers from South Sudan and other nationalities, we have been supported to get shelters, food, education, protection from the securities apparatus in these regions, and the love, mercy and forgiveness from our friends and relatives, and from all the Good Samaritans. Now we need to go and do likewise to others.”

If we are going to accompany needy people today, especially “the marginated and those on the periphery of society,” we have to have a new, humble, and unselfish mentality and follow St. Paul’s advice in today’s Letter to the Philippians:  “Have in you the same attitude that is also in Jesus Christ who emptied himself; he humbled himself, becoming obedient to the point of death, even death on the cross.” All the SCC members agreed that we need to imitate the humility of Jesus. Catechist Simon Reat Mar pointed out that Jesus died on the cross for all of us, including urban refugees in Nairobi and asylum seekers everywhere. He said that Jesus calls us to be Good Samaritans to other needy people. In our world today we remember and reach out to the sick and needy people during this present Covid-19 pandemic.

This is related to Pope Francis’ “Message for the 106th World Day of Migrants and Refugees” on the theme: “Like Jesus Christ, Forced To Flee. Welcoming, Protecting, Promoting and Integrating Internally Displaced Persons.” Pope Francis states: "In the light of the tragic events that have marked 2020, I would like this “Message,” although concerned with internally displaced persons, to embrace all those who are experiencing situations of precariousness, abandonment, marginalization and rejection as a result of COVID-19."

In these marginated people and these people on the periphery of society in Germany you will meet Jesus “in disguise.” Are you ready?

And if you want to reach out to internally displaced people in South Sudan you can support the organization Solidarity with South Sudan, based in Juba, South Sudan, which is a collaborative effort by many religious congregations and societies to send missionaries to live and work among the suffering people in South Sudan. Members of these congregations and societies together train teachers, nurses, midwives, local farmers, and community leaders in the youngest country in the world.