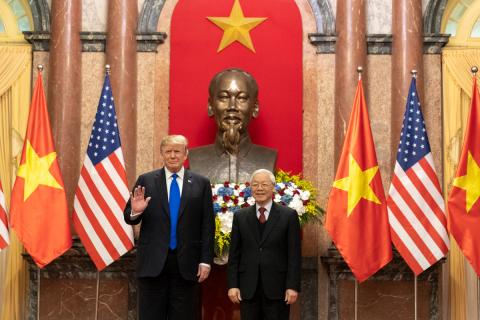 On February 27 and 28, North Korean leader Kim Jong-Un and U.S. President Donald Trump met in Hanoi for their second summit, a meeting which abruptly ended without an agreement.The following article was published in theMarch-April 2019 issue of NewsNotes.

The disappointing outcome of no nuclear weapons agreement at the summit between the leaders of North Korea and the United States in Hanoi, Vietnam, leaves open the possibility of further meetings but illuminates the importance of preparation. Dialogue and diplomacy are the ways to achieve peace on the Korean Peninsula, but they are needed on more than the highest levels.

The current U.S.-North Korean nuclear negotiation process is flawed and in need of more sustained efforts and detailed negotiations at the diplomatic level. Reports after the second summit indicate that working-level negotiations will continue, as U.S. Secretary of State Mike Pompeo stated, which is a source of hope.

The failure to reach an agreement is disappointing but should not be taken as a sign that diplomacy is not working. We have not advanced nearly far enough, but where we are now is far better than where we were just months ago, with Trump and Kim exchanging threats of fire and fury. Dialogue is always a step in the right direction and diplomacy is still the best path.

In the immediate aftermath of the summit there were conflicting reports on what occurred. President Trump initially told reporters, “Basically, they wanted the sanctions lifted in their entirety, and we couldn’t do that. We had to walk away from that.”

North Korea’s Foreign Minister Ri Yong Ho and Vice Foreign Minister Choe Sun Hui made their own statements to the press that contradicted Trump. They insisted Kim only asked for partial sanctions relief, specifically the end of sanctions which impede the civilian economy and people’s livelihoods in exchange for shutting down its main nuclear facility in Yongbyon and a permanent halt of the country’s nuclear and intercontinental ballistic missile tests. Ri and Choe said the U.S. demanded “one more” measure beyond the Yongbyon dismantlement, however. A senior official at the U.S. State Department conceded that Ri’s claims regarding the specific sanctions – that impede the civilian economy and people’s livelihoods – were indeed accurate.

Reports of the United States demanding additional terms in the final negotiations – specifically attempts by U.S. National Security Adviser John Bolton to bring North Korea’s biological and chemical weapons into the agreement – are troubling. The failure to achieve any sort of agreement in Hanoi is a missed opportunity that proves the need for deeper diplomatic efforts.

In addition, the time is right for Congress to take action. U.S. Rep. Ro Khanna of California has introduced a resolution for a peace agreement to formally end of the Korean War. Congress can move the diplomatic process forward by supporting this legislation.

H. Res.152 has 19 cosponsors and has been referred to committee. The resolution calls on the current U.S. administration to provide a clear roadmap to achieve a final peace settlement and highlights the importance of reciprocal actions and confidence-building measures between the parties. Former President and Nobel Peace Laureate Jimmy Carter supports the resolution and says ending the Korean War is “the only way to ensure true security for both Korean and American [sic] people.”

Almost 70 years have passed since the Korean War began and while the direct conflict ended with the signing of an Armistice Agreement in 1953, the war never officially ended through a peace agreement. North Korea, South Korea, and the United States have been officially at war since 1950.

Rep. Khanna, a member of the House Armed Services Committee, said via press release that: “Historic engagement between South and North Korea has created a once-in-a-generation opportunity to formally end this war. President Trump must not squander this rare chance for peace. He should work hand in hand with our ally, South Korean President Moon Jae-in, to bring the war to a close and advance toward the denuclearization of the peninsula.”

President Moon is chiefly important on the heels of summit. Another Inter-Korean summit could go a long way in moving the diplomatic process forward. As Stéphane Dujarric, Spokesperson for the UN Secretary-General said following the summit: “Courageous diplomacy…has established the foundation to advance sustainable peace and the complete and verifiable denuclearization of the Korean Peninsula, and we all very much hope that these discussions will continue in that direction."

The official end of the Korean War and a formal peace agreement would be mutually beneficial to both parties to the second summit in Hanoi. It is not only symbolically important but an imperative for sustainable peace on the Korean Peninsula.

Faith in Action: Ask your Member of Congress to support the resolution for a peace agreement to formally end the Korean War. http://bit.ly/HRes152

Photo: President Donald J. Trump and Nguyen Phu Trong, General Secretary of the Communist Party and President of the Socialist Republic of Vietnam, participate in a photo opportunity in the Mirror Room of the Presidential Palace Wednesday, Feb. 27, 2019, in Hanoi. (Official White House Photo by Shealah Craighead/Public Domain)