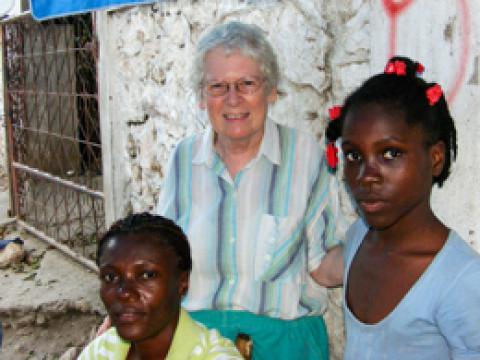 A coalition of faith and development organizations, including the Maryknoll Office for Global Concerns, sent a letter to the U.S. Department of Agriculture (USDA) and U.S. Agency for International Development (USAID) calling for the immediate cancellation of USDA’s planned shipment of 500 metric tons of U.S. peanuts to Haiti. The following article was published in the May-June 2016 issue of NewsNotes.

“Food dumping” is the practice of off-loading agricultural surpluses and expanding markets that has been shown to devastate the livelihoods of small farmers in the Global South, including in Haiti. In April 2010, former President Bill Clinton apologized to Haitian rice farmers for the United States’ dumping of surplus U.S. rice in Haiti and destroying their livelihoods. Haitian rice farmers could not compete with the cheaper U.S. rice.

Maryknoll Sisters in Haiti worry that the U.S. government will repeat this injustice, this time with peanuts.

More than 60 U.S. and Haitian organizations, including the Maryknoll Office for Glboal Concerns, have joined a letter calling for an immediate cancellation of recent plans announced by USDA to ship 500 metric tons of peanuts to Haiti under its “Stocks for Food” program. The letter is available at http://bit.ly/USDApeanutdumping .

UPDATE: On May 2, the Haiti office of USAID replied to a tweet from our friends at the Mennonite Central Committee announcing our joint letter (see image below). National Public Radio picked up the story on May 5, reporting that "While the U.S. Agency for International Development declined to comment, a tweet from its Haitian office did not seem to support USDA's peanut plan." 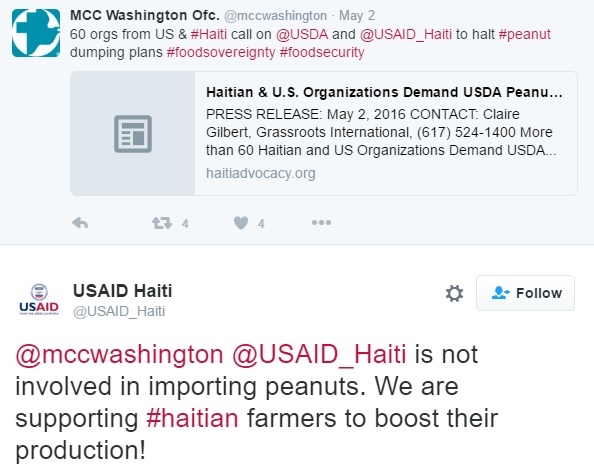 According to the letter, “When the U.S. pressed Haiti to lower its tariffs on rice, the Haitian market was flooded with rice mostly from the U.S. and the price of Haitian rice plummeted. Haitian rice farmers (who had previously produced nearly all of the country’s rice) were left with nothing. The consequences were vast and far-reaching. Many of the farmers had to move to Port-au-Prince in search of work. Port-au-Prince became overpopulated, which, in turn, is a major reason why the earthquake in 2010 was so devastating.”

Some experts in the development in Haiti suspect that the dumping of peanuts could be even more damaging. Quoting the letter, “Ricot Jean Pierre of the Haitian Platform to Advocate for Alternative Development (PAPDA) argues that the peanut program will create an even larger catastrophe than changes to Haitian rice tariffs and the flooding of markets with cheap, subsidized U.S. rice because the production of peanuts serves as a key livelihood strategy for hundreds of thousands of people (particularly women) and creates a great deal of wealth and activity in the rural areas. The proposed USDA peanut program could destroy that source of income for Haiti’s rural families, and could potentially set off a series of devastating consequences while also preventing the Haitian government from developing policies to support the nation’s agriculture, particularly in the peanuts sector.”

The letter says that the U.S. plan for peanut dumping is out of alignment with USAID strategies for food security, especially more recent policies that favor locally grown food procurement. Local and regional food procurement spurs the development of local rural economies. The coalition is extremely concerned that this plan will destroy local livelihoods in a country whose economy remains fragile. The letter asks USDA and USAID to cancel their plans to ship U.S. peanuts to Haiti.

The Maryknoll Sisters in Haiti assist women and children in guaranteeing their right to nutritious and adequate food. Sister Susan Nchubiri started a cooperative farm in La Tremblay, Haiti. It is a micro-credit project for 16 single mothers – the most vulnerable in this already poor community. They have two acres for crops that they use to generate income and feed their families.

Photo: Maryknoll Sister Theresa Kastner (center) works with women farmers in Haiti. The devastating earthquake in Haiti in 2010 killed 220,000 and displaced 1.3 million. “I had witnessed poverty in Nepal, but it was nothing compared to that of the people of Haiti, which was already the poorest country in the Western Hemisphere before the earthquake,” said Maryknoll Sister Elizabeth Knoerl. Read more about the work of Maryknoll Sisters in Haiti at http://maryknollmagazine.org/index.php/magazines/518-good-for-us-to-be-here .