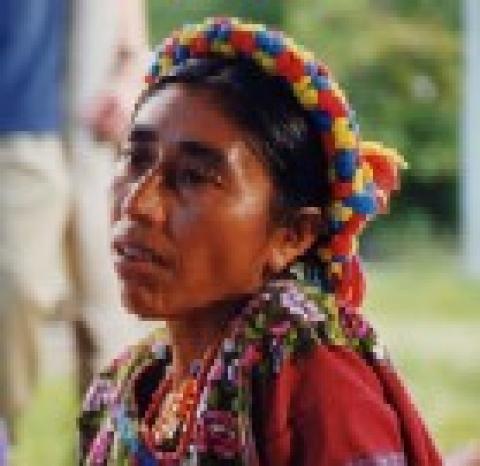 Maryknoll missioners have served in Guatemala for decades. Many  worked there during the brutal years of the civil war, which lasted from 1960 until the mid-1990s. Maryknollers lived among indigenous communities that were targeted by military and paramilitary units, and collectively, they knew thousands of people who lost their lives (including a Maryknoll missioner: Read about Fr. Bill Woods, a priest whose 1976 plane crash in Guatemala is considered suspicious.)

The recent trial of former president Efrain Rios Montt was significant in that it is the first time a former leader has been charged and tried within his/her own country for crimes against humanity. The guilty verdict provides some relief for the years of gross injustice and trauma suffered by the people. (Read more about the trial here.)

UPDATE: On May 20, the Guatemalan Constitutional Court, the highest-ranking court in the country, overturned the genocide conviction and prison sentence. (New York Times)

On April 16, a lengthy three-page ad appeared in the Guatemalan newspaper Prensa Libre saying that the genocide trial was a farce. It named international groups like Maryknoll and the Archdiocesan project "Recovery of the Historical Memory" as responsible for propaganda that led people to think that the government was at fault for the violence that Guatemalans experienced during its long years of internal conflict. This ad placed all the blame for the violence on rebel fighters and featured photos of Guatemalan soldiers wounded at the hands of guerrilla forces.

We asked several Maryknoll missioners who lived and worked in Guatemala to share their brief reflections on the trial and its outcome; following are some of the responses. We will post more as we receive them:

Fr. Bill Mullan (40 years in Guatemala) – It is a good thing that people hear and know what happened. I have cried often for many the Mayan people in whose communities I served, especially a community called San Francisco Nentón, where more than 500 people in one day were massacred. In another community, as a lieutenant was killing Diego Perez, a catechist and a friend who accompanied me on many trips to the villages, he said, “Look, this man is a communist, look at the watch he is wearing, only communists wear watches like that.” It is a watch that I bought for him. The lieutenant invited the people to play football with his severed head. If the trial brings people to hear about the massacres committed by the military, supported by the U.S., it has importance. General Rios Mont began his life as a Catholic in the Maryknoll parish in Huehuetenango. His brother became a bishop and is a close friend of Maryknoll. I know that the spirit of the many Mayan men, women and children brutally killed, live and I pray that their children and grandchildren can live their lives on their sacred lands that really belong to them. Peace.

Sheila Matthews, lay missioner -- My first reaction on hearing the news of the verdict on Rios Montt was sheer joy-shouting and clapping. As I reflect on that I think back to the many people that I knew in Guatemala, but one story stands out as to how the Indigenous were viewed within Guatemalan society. Upon returning from a village, I was told that I needed to go see one of the health promoters who had brought in his father who had fallen out of a tree. The health promoter told me that he had taken his father to the health center/hospital and that after examination, the doctor said that he could leave, and needed to rest and take vitamins. As I looked at his father, who could hardly walk because his balance was so off and was not making any sense when talking, I told the health promoter that he needed to get his father to Guatemala City on the midnight bus and then take him directly to the emergency room. Luckily he arrived in time to have surgery and had a full recovery. When reviewing cases with the doctors at the hospital later, they told me that I was paternalistic and how did I expect to find money for that care. My response was outrage. I realized that for them, because this was an Indigenous man who was poor, he had no meaning and his life no value. In many ways, this is how Indigenous were treated on all levels of society. To see the Indigenous Ixil women in their traditional dress giving testimony gave me almost as much joy as having Rios Montt found guilty. Their sense of their dignity, their courage, and their being able to give a voice to the atrocities committed against their relatives made one feel that they knew they had a right to be heard and for justice to be done. For the judge and attorney general to have the courage to hear this case and to give the guilty verdict in the midst of so much injustices in Guatemalan society was another milestone. Hearing the guilty verdict read against Rios Montt gave me hope for Guatemalans and their judicial process. Although nothing will truly give justice to all the suffering, it is a sign that perhaps the Indigenous of Guatemala will be seen as dignified human beings by Guatemalan society who have the right to be heard and served justice. I hope and pray that the verdict will hold up and that there will be no repercussions against the Indigenous people.

Br. Marty Shea – There is a sense of vindication in this [trial] because we have been saying all these years that “Yes, there was genocide in Guatemala.” There must be a lesson in all this inhuman violence and the verdict: War doesn't work. It is the ultimate in madness in which all are destroyed, those who are killed, their families with whom I lived in exile in Mexico, and now the Guatemalan military institution with its memories of genocide. Pray that the outcome will be peace at last and healing and compassion for all.

Sr. Jane Buellesbach – It is incredibly refreshing to have truth and justice win out over lies and impunity. Although not all, most Guatemaltecos as are rejoicing and relieved with the sentence given to Rios Montt.

Fr. Bill Donnelly - I worked in Huehuetenango, Guatemala from 1965 until 1990. In my biggest parish, Santa Cruz Barillas, hundreds of people were killed, especially in 1982 when Rios Montt was president. Some were killed by the guerrilla but most were massacred by the Guatemalan army. This has left me with a lot of sadness and doubt. The Guatemalan people must address the own needs for peace with justice. This, they are courageously doing. The United States bears much of the blame for what happened in the war. [Ed. note: For more information, see this report from PBS's NewsHour, As Rios Montt trial nears end, a look back at U.S. role in Guatemala's civil war, posted May 10, 2013.]