Guatemala: My time with a migrant caravan 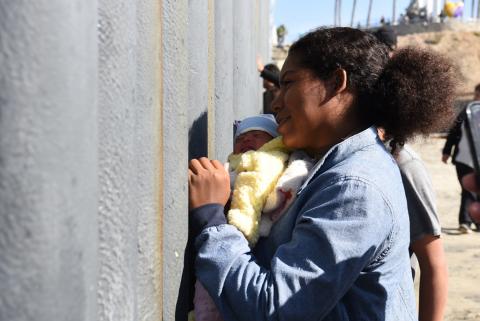 Sr. Dee Smith, MM, reflects on spending Holy Week with people traveling as a migrant caravan. This article was published in the May-June 2019 issue of NewsNotes.

At the beginning of Holy Week, I found myself standing on a bridge that links the southern coast of Mexico with Guatemala, handing out care packages and offering emotional support to hundreds of adults and children who had left behind all they had in Honduras, El Salvador, Nicaragua, and Guatemala.

Their Way of the Cross wasn’t just a Good Friday event. It had started two weeks earlier when their journey out of poverty, violence and desperation had begun.

Last October, when the first large caravan of migrants passed through Guatemala on its way north, it was met by an outpouring of generosity. Television crews were stationed at strategic points along the route: shelters and houses of hospitality, emergency medical stations, towns that offered food and water to the exhausted travelers. It looked like the triumphant entrance into Jerusalem, banners waving, words of encouragement and free rides on more than a donkey’s back. Smiles and hope for a better future.

When I told the team at the hospice center about the UN’s request for our help, they said a resounding “Yes! They are our brothers and sisters.” The UN asked us to store the personal hygiene kits and bottles of water and to offer counseling and emotional accompaniment and care during the journey. The team had no problem giving up the first three days of Holy Week for this extra work and various members stood with me in the blazing sun each day, handing out the supplies, listening to stories, and giving a gentle hug and smile to whoever needed one.

We assisted 1,080 people in those three days, plus their small children and babies. But that is only the numbers. The reality of what we had witnessed hit us after we had finished. Many of us commented on the single mothers escaping violence, abuse, and despair in their home countries, carefully carrying babies in their arms and clinging onto a small child’s hand as they struggled to juggle bags, flipflops, and water they had received.

One woman told me she was from Honduras and she was traveling with her three children. Her husband had been shot dead by a gang a month ago, for not paying extortion money on time. Now the gang was coming after her, demanding its share of her income from the shop she and her husband ran. She was tired, her face the expression of exhaustion and resignation. I asked myself “Is this how Mary felt as they took her son away, led by soldiers to certain death?”

This woman’s resurrection moment is some time far off in the future – maybe after she has passed through Mexico, crossed the border into the United States, moved into detention and maybe allowed to stay. Her hope lay in surviving her Way of the Cross, her Calvary and protecting her children.

Our team took care to engage as many of the people as we could, asking them to take care, to carry information about their rights if sexually assaulted and to pick up supplies from our medical stand. We explained the need for them to move in groups for safety, to not be fooled by anyone offering “opportunities to earn good money” as they pass through towns where drugs are the biggest money earner. We cautioned parents of small children about human trafficking and organ harvesting, problems that are very real in this part of the world.

I thought of Jesus on his way to his fate, telling the women of Jerusalem not to weep for him but for themselves. The weeping is for what we have become as humans, needing to tell one another that evil lurks around every corner and children are sometimes regarded as a commodity to be traded.

Every person we met, almost without exception, said a heartfelt thank you for our presence and support. Are these the people Donald Trump calls thieves and rapists, murderers and job snatchers? Are they not the innocent victims of corrupt government leaders, societies that don’t care and people who have lost a sense of caring for one another?

Image: Mother and 10 day old infant traveling with a migrant caravan to seek asylum in the U.S. arrive at border fence in Tijuana, Mexico, Nov. 23, 2018. Photo by Flickr/Daniel Arauz