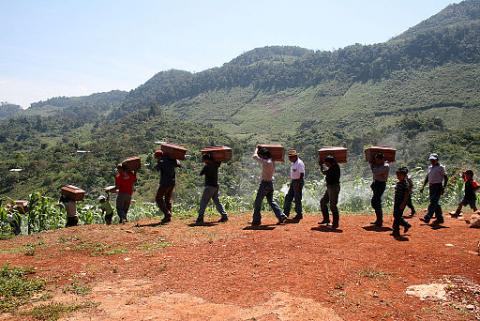 MOGC’s Sustainable Pathways to Peace and Security intern Nicholas Alexandrou contributed to this article, published in the January-February 2016 issue of NewsNotes.

In early January, Guatemalan police arrested 18 people on charges of crimes against humanity, as part of an ongoing investigation into forced disappearances that occurred between 1981 and 1988 against indigenous communities.

The surprising crackdown comes a week before the ceremonial inauguration of President Jimmy Morales and a few days before former dictator Efrain Rios Montt faces a retrial over genocide charges for a series of massacres committed against the Mayan indigenous Ixil between 1982 and 1983. This could be a difficult predicament for incoming President Jimmy Morales, as close associates from his party were among those targeted.

Attorney General Thelma Aldana has asked the Supreme Court to relinquish immunity for Congressmen Justino Ovalle Maldonado, who is a member of the National Convergence Front (FCN), the same political party as President Morales. Maldonado was director of national intelligence from 1982-83 and served in the Guatemalan department of Alta Verapaz, where numerous mass graves have been exhumed.

Reaction to the arrests among human rights activists has been a mix of surprise and optimism. The Convergence for Human Rights (DDHH), a coalition of organizations focused on human rights in Guatemala, released a statement expressing happiness and support for the public prosecutor team and the attorney general for this significant moment in the search for justice and fight against impunity.

The timing of the arrests may be related to the recent passage by the U.S. Congress of US$750 million in funding for El Salvador, Guatemala, and Honduras, which includes conditionalities for combating impunity.

According to the funding bill for 2016, participating Central American countries must comply with human rights and corruption rules to receive U.S. monies. Congress is obligated to withhold 50 percent of funding from any country that fails to meet certain human rights conditions, such as the protection of civil society, local consultation processes for marginalized communities, accountability among security forces (both civilian and military), and strengthening the civilian judicial system. These conditions are to act as a countermeasure to abuses by security forces.

Congress is also obligated to withhold 25 percent of funding to any country that fails to improve border security or fails to cooperate with U.S. government agencies in repatriating those who “do not qualify” as refugees based on international laws. “Improving border security” remains vague and could potentially undermine the sovereignty of the recipient nation given U.S. security interests on border enforcement.

While the funding bill recognizes the importance of respecting human rights and the challenges related to both institutional corruption and impunity, there remain concerns over the effectiveness of this spending along with Congressional and administrative priorities on border security and repatriation.

Photo: Ixil people carry remains after an exhumation in the Ixil Triangle in February 2012. Photo by Trocaire/CAFCA archive