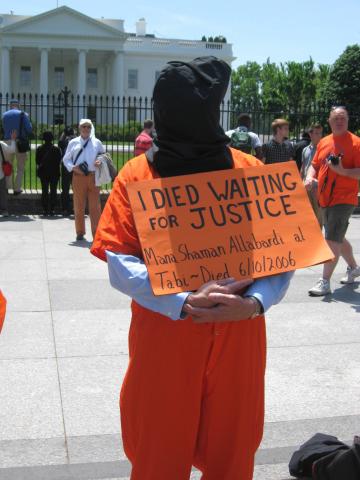 The following article appeared in the May-June 2013 issue of NewsNotes. Photo from May 3 demonstration at White House by Judy Coode.

As of early May, it is believed that at least 100 men held at the U.S. military detention facility at Guantanamo Bay, Cuba are participating in a hunger strike; 23 are being force fed. While prisoners at Guantanamo have fasted to protest their detention and/or treatment over the 11 years of the facility’s use, this current strike began in February as a response both to a new, harsher team of guards and to the fact that the imprisonment appears to be open-ended with little hope for release.

Eighty six of the 166 detainees at Guantanamo have been cleared for release. According to the Washington Post (May 2), "The process of slowly emptying the facility by sending detainees home or finding them third countries in which to live has been moribund for a year. The administration blames the paralysis on congressional restrictions, but the defense secretary can still act by certifying that a particular transfer is in the national security interests of the United States. Attorneys for the detainees said the administration should move quickly to exercise that option."

On April 30, Kathy McNeely of the Maryknoll Office for Global Concerns, along with leaders from 37 other faith-based organizations, signed a letter to President Obama and all members of Congress, describing the desperate situation at Guantanamo and calling on them to expeditiously move to close the prison there. (During a press conference earlier that day, the president had reiterated his belief that the U.S. needs to close the detention center.)

The letter, organized by the National Religious Campaign Against Torture (NRCAT), states:

"In 2008, both major party candidates, you and John McCain, promised to close the prison at Guantanamo. Two days after your inauguration, you issued an executive order mandating that Guantanamo be shuttered within a year.

"Unfortunately, more than four years later, our government has not kept its commitment to close Guantanamo. Congress passed, and you signed, legislation placing restrictions on transferring detainees out of Guantanamo. This year, the Department of State shut down the office responsible for closing the prison. More recently, reports indicate that the military has requested almost $196 million to upgrade facilities at Guantanamo.

"In this time of austerity, instead of spending nearly $200 million to upgrade facilities at Guantanamo, our leaders should move forward with transferring detainees and closing the prison there. It is particularly troubling that the 86 cleared detainees remain imprisoned there – in many cases for years after they were cleared. The desperation and hopelessness felt by many of the detainees has recently sparked a hunger strike that is spreading among the detainees – highlighting the growing human tragedy of the detention center.

June is Torture Awareness Month. Plan one or more event with your parish/community on the topic of the use of torture and specifically on the situation at Guantanamo. Find resources and suggestions at NRCAT’s website, www.nrcat.org.