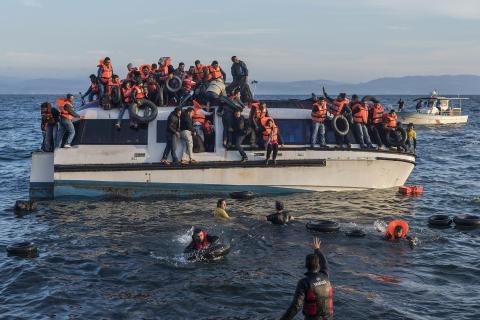 Maryknoll Sister Rosemarie Milazzo regularly volunteers with a Christian Peacemaker Team to Kurdistan in northeastern Iraq and at refugee camps on the island of Lesbos in Greece. Sister Milazzo wrote the following text in an email while on Lesbos to her fellow Maryknoll Sisters at their center in New York on June 3, 2018. It is reprinted with permission from Sister Milazzo in the September-October 2018 issue of NewsNotes.

Greetings from Lesbos. I pray that all is well there and that the Day of the African Child [celebrated on June 16 every year to commemorate the 1976 student uprising in Soweto, South Africa] was well celebrated. I would like to see a Day of the Refugee Child but I would also like to see the day when there are no more refugees, only citizens.

I am well but it has been very hectic these past days. On Friday night, May 25, there was a violent episode in Moria Camp [the largest refugee camp on the Greek island of Lesbos] where the overcrowding, lack of enough water, food, and lack of activity is such a problem. Refugees arrive from all over the troubled world. Frustration, anger, rage, impatience are all around the camp.

Unfortunately, the Kurds and Arabs, who have a history of misunderstanding, met in a violent fight that night and many were hurt. The Kurds ran for their lives and many, many arrived in Mytilene [the capital city of Lesbos] in a park there and settled for the night. The police came and told them they needed to leave and then contacted Pikpa Camp [a volunteer and refugee-run informal shelter] asking that we take the refugees into our camp. About 360 arrived during the night and with the help of other NGOs, tents were set up, blankets were distributed and tea was prepared. Many of the arrivals were wounded, head wounds, bandaged hands and necks, etc. 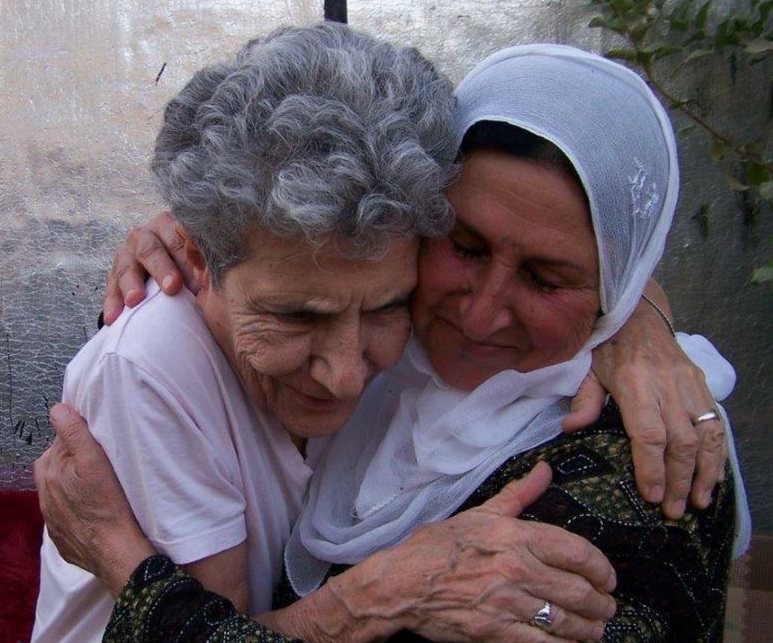 In the morning, Doctors Without Borders arrived and helped to minister to the hurt. More tents arrived and they were set up for the arrivals that kept coming during the day.

All the activities at the camp had to be on hold until we could manage with such a large number. NGOs joined us, some with food, some with clothing, some with other needed supplies.

My job was to visit each new tent, make sure all were well, make the people feel safe, and assure them they were welcome. I carried so many stories as I sat in these tents. The people are so frightened already and now, they fear more uprooting. I am so grateful that I spent all those years in Kurdistan with the Kurds. I have pulled up every single word, phrase that I know so that I can use it with the Kurdish community that is so traumatized.

Photo: Maryknoll Sister Rosemarie Milazzo (left) and a refugee in Kurdistan, Iraq, in 2015.

As of this morning, more refugees are arriving in our camp. Moria will not take them back, nor will they agree to return there. It is too dangerous for the Kurds as well as the Yazidi [a Kurdish-speaking people, indigenous to a region of Iraq and the target of a genocide led by the so-called Islamic State in 2014]. I was in the Yazidi village in Kurdistan so many times and I know what they suffered when ISIS attacked their village. All of the women are wounded and they hold on tight.

This morning, I was able to get to the church in Mytilene that has a liturgy without a priest for refugees every Sunday. It is in French but I get a sheet and pretend that I am [a French-speaking Maryknoll Sister] and sing along. The refugees sing with such gusto, a few mispronounced words would never cause a stir.

After Mass, a small group wanted to meet to share. I sat with them for a bit and it was amazing. One young man refused the food that the church provides for them. He said "I am fasting." I asked him to tell me about his fast. He just said "I fast so that all THIS will be over." I just want to join my prayer to his.

Thank to so many of you who have written to me. It is always a delight to hear from home.

Top photo: Syrians and Iraq refugees arrive on the island of Lesvos, Greece. Photo by Ggia and licensed CC 4.0

Maryknoll Sister Rosemarie Milazzo (left) and a refugee in Kurdistan, Iraq, in 2015.