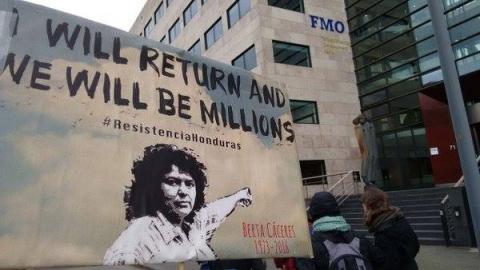 Thank you for making a difference!

Thanks to your letters, calls, and actions in solidarity, we are relieved to tell you that Gustavo Castro Soto, coordinator of Friends of the Earth Mexico, has safely returned home to Mexico from Honduras today, April 1, 2016, after the Honduran government lifted a month-long ban on his freedom to travel.

More than 3,000 people responded to our emails asking for help. And it worked. You helped free Gustavo.

On March 3, Gustavo Castro Soto was wounded during an attack in which indigenous environmental activist Berta Cáceres was murdered in her home in Honduras. As co-founder and coordinator of the Civic Council of Popular and Indigenous Honduras (COPINH), Cáceres organized communities in a peaceful campaign to stop one of the world's largest dam builders from constructing the Agua Zarca Dam, which would have cut off the Lenca people from water, food and medicine.

Berta Cáceres is a martyr for her people and for the Earth. Her family made this statement today in recognition of the one month anniversary of her death.

Other good news amidst the suffering came today – all three of the funders of the Agua Zarca Dam (FMO, Finnfund, and the Central-American Bank for Economic Integration) have suspended their financial activities in Honduras.

But there’s still a long way to go.

While we have caught the attention of the State Department and some members of Congress, we still need your help to act for justice in Honduras – to press for an independent international investigation of the murder of Berta and other environmental activists, to stop the oppression faced by Hondurans in this post-coup era, and to call on the United States to end its aid to the Honduran military which has frequently been associated with the human rights abuses in the country. We look forward to welcoming Berta’s family and human rights activists for the Inter-American Commission on Human Rights meetings in Washington, D.C., next week.

To receive our action alerts about this and other social justice issues, go to www.maryknollogc.org and click on "Join our email listservs."

As the suffering of Hondurans continues, we remember the words of Saint John Paul II, “Do not abandon yourselves to despair. We are the Easter people and hallelujah is our song.” Together, we are working for a new day in Honduras. Thank you for your continuing support.

Photo: Demonstration outside of the headquarters of Dutch bank FMO. Photo courtesy of COPINH.