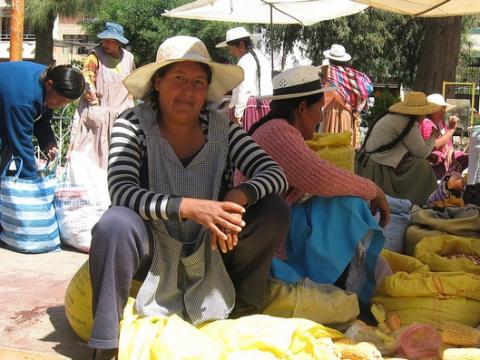 At the June 27-28 Vienna+20 High-Level Conference on Human Rights, the Global Network for the Right to Food and Nutrition (RTFN) was launched with the intent to hold governments accountable for the realization of one of the most violated human rights worldwide: the right to adequate food and nutrition. As a member of the Ecumenical Advocacy Alliance (EAA) and through participation with the U.S. Food Sovereignty Alliance, the Maryknoll Office for Global Concerns (MOGC) is a founding member of RTFN.

The network is a flexible instrument that can bring together human rights activists on food, to link them in their lobby work, to bring their messages forward in a coordinated manner. Strengthening advocacy efforts around food justice has never been more important. Civil society must hold governments accountable for the policies and programs that they put in place, especially those done through public private partnerships. Malcolm Damon, executive director of the Economic Justice Network of the Fellowship of Christian Councils in Southern Africa (FOCCISA), says that governments "need to serve the most vulnerable."

The new global network has the potential to strengthen work on the ground for the right to food undertaken by so many people around the world. The RTFN’s call to action states: "All human beings, without discrimination, are entitled to enjoy the full realization of the human right to adequate food and nutrition. This right guarantees people’s informed participation in the decision making and elaboration of public policies assuring an economically, politically, socially, and ecologically sustainable supply of adequate and nutritious food within the frameworks of food and of people’s sovereignty."

As Olivier De Schutter, the UN Special Rapporteur on the right to adequate food, has stated: "The right to food is not a symbol: it’s a tool." It is important that those most affected by hunger and malnutrition shape food polices. The network is all about creating avenues to allow those living in poverty to find ways to hold governments accountable.

The MOGC believes along with others in the EAA that food justice advocacy must be based on the right to food to effectively address the causes of hunger and enable and empower those most vulnerable to have access to the resources they need – from natural resources such as land, water and seeds to access to markets – to feed themselves rather than rely on aid.

From a U.S. advocacy perspective it is extremely important to be linked with others around the world so that we can work together to promote economically and ecologically sustainable ways of producing food globally. The RTFN enables us to join with others in ensuring that decision makers put the needs of the most resource poor people first when launching food, agricultural and nutrition programs.

The MOGC participated on the editorial board for this year’s Right to Food and Nutrition Watch which will focus on how international policy, at times, has stalled the realization of the right to food, with a special emphasis on public private partnerships, and the negative ecological impact of agricultural development.

Human rights based advocacy is critical to the Catholic call to promote and protect the God-given human dignity of all people. Food and nutrition are fundamental human needs that are quite impossible to fulfill without utter respect for the earth that sustains us.

For more information see the Right to Food and Nutrition Watch.