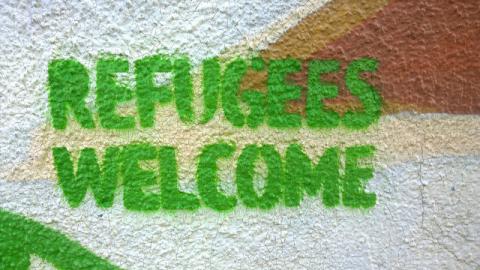 The following article was written by Maryknoll Office for Global Concerns staff member Sr. Claris Zwareva and published in the March-April 2016 issue of NewsNotes. Sr. Claris serves as Maryknoll’s representative at the United Nations where the Maryknoll Sisters and the Maryknoll Fathers and Brothers have consultative status with the Economic and Social Council.

The United Nations estimates that there are more than 60 million displaced people around the world, the largest number since the World War II era and since the United Nations High Commissioner for Refugees agency (UNHCR) came into being. If refugees and migrants formed one country they would be the 24th largest country in the world. The UNHCR 2014 annual report refers to them as “a nation of the displaced.”

Many organizations including the Maryknoll Sisters, Maryknoll Fathers and Brothers, and Maryknoll Lay Missioners are helping refugees and migrants around the world. People are forcibly displaced from their homes mainly due to conflict, war, persecution, and disasters exacerbated by climate change. All migrants suffer tremendous difficulties, but women, children, and the elderly are most vulnerable to being subject to human trafficking, forced labor, and exploitation.

Aware of the dire conditions that refugees and migrants face along the way and at their destination, the United Nations Department of Public Information (DPI-NGO) hosted a panel discussion in February to discuss the refugee crisis and to rethink and strengthen the response. Of the almost 40 million refugees registered with UNHCR, 51 percent are children under the age of 18 who find themselves deprived of their right to education. Lack of education for children impairs progress toward sustainable development and impedes building capacities in communities. Having lost everything that they ever owned, refugees live with feelings of up-rootedness, emptiness, and lack of identity.

The Syrian refugee crisis is the biggest humanitarian emergency that the United Nations is responding to today. More than 4.6 million people have fled Syria and a staggering 7.4 million are internally displaced. A drought lasting more than five years has wreaked havoc in a country weakened by strife.

During the panel discussion, the UNHCR reported on its work in 120 countries partnering with nongovernmental organizations as well as with governments in addressing the needs of refugees and migrants. They presented a video of refugees and migrants, including people from Iraq, Syria, Myanmar, the Philippines, Somalia, and Afghanistan. Fear, desperation, and a deep longing for security was inscribed on their somber faces. You can watch the video online at https://vimeo.com/140171048. The panel also included testimony from refugees and representatives from nongovernmental organizations with experience working with refugees that reminded participants that we all have a duty to help.

The UN Secretary General will host a high-level summit on the crisis in September. The goal is to ensure that migrants and refugees benefit from the commitments member states made in the 2030 sustainable development agenda – to leave no one behind. Member states are also expected to reaffirm their commitment to fully implement the 1951 Refugee Convention, including the principle of non-refoulement. The concept of non-refoulement prohibits member states from returning a refugee or asylum seeker to territories where there is a risk to his or her life or freedom on account of race, religion, nationality, membership of a particular social group, or political opinion.

When given the opportunity to respond to the panelists, a representative of a civil society organization reminded us all that refugees, migrants and asylum seekers are our brothers and sisters; and all visitors to the United Nations are greeted by a mosaic based on a work by American artist Norman Rockwell entitled “Golden Rule.” The art work depicts people of different nationalities standing together with the words “Do unto others as you would have them do unto you” inscribed on the surface.