Gambling with nature: A risky investment 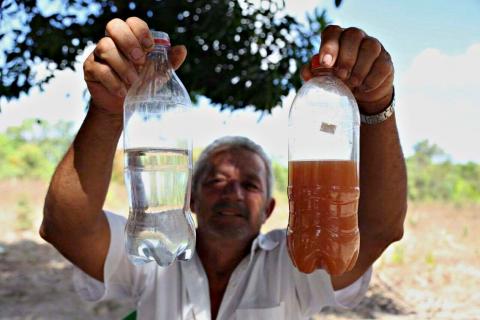 The following article was published in the October issue of Encounters, a monthly e-newsletter publication of the Maryknoll Office for Global Concerns’ Faith-Economy-Ecology Program and reprinted in the November-December 2017 issue of NewsNotes.

In the last ten years, pension funds and other large investment funds have invested more and more in agricultural land as a part of their financial portfolios. Unfortunately, these investments are contributing to increasing human rights violations and environmental destruction in many countries as they often expel generations-old communities from their homelands and tend to invest in large single crop plantations that create numerous environmental problems. Citizen campaigns are responding at all levels to protect affected communities and help Earth recuperate.

In 2004, portfolio managers began to invest heavily in commodity markets after Goldman Sachs created financial tools such as commodity index funds and exchange-traded funds. Large investors bought massive amounts of “futures”– financial contracts obligating the buyer to purchase an asset or the seller to sell an asset, such as oil, corn, soy, and wheat, at a predetermined future date and price –without needing to actually deliver or store the physical product. Essentially, investors bet that the price of a commodity will go up in the long run, an almost sure bet.

Buying agricultural land as a purely financial investment became popular among institutional investors after the 2008 financial crisis. As land suitable for development becomes more scarce, investors earn high profits in the long run with the rising price of land (in part driven by the entrance of these massive funds into land markets) and in the short run by renting the land to agribusinesses or selling agricultural production.

Pension funds in the U.S., like those managed by TIAA, formerly TIAA–CREF (Teachers Insurance and Annuity Association–College Retirement Equities Fund, the leading provider of financial services for retired teachers and public workers in the U.S.), and Harvard University’s endowment fund, have steadily built up their agricultural land holdings around the world over the last decade. TIAA alone controls almost one trillion dollars in total investments. Transferring even a small percentage of its funds into land holdings adds many billions of dollars to land markets. In 2016, TIAA became the world’s largest investor in agriculture.

Beyond commodities and land, financial institutions such as the World Bank Group and private banks, together with some governmental and non-governmental organizations, are working to create new “nature markets.” For example, carbon markets enable countries and companies to trade carbon emission allowances. They are becoming an increasingly popular way to theoretically decrease one’s carbon footprint, yet are wracked with problems and can be easily gamed. A chief economist of Citigroup predicted a “globally integrated commodity market for fresh water” by 2035 or 2040. Meanwhile, markets are being created for biodiversity, habitats, and more.

Pope Francis’ warning about the danger of carbon markets  holds true for other such nature  markets: “The strategy of buying and selling ‘carbon credits’ can lead to a new form of speculation which would not help reduce the emission of polluting gases worldwide… Rather, it may simply become an expedient, which permits maintaining the excessive consumption of some countries and sectors.” [Laudato Si’ 171]

In the Cerrado region near the center of Brazil, TIAA has bought hundreds of thousands of acres of land. A fact-finding mission made up of human rights and environmental experts from nine countries and organized by FIAN International in September documented instances of TIAA buying land from a well-known land grabber whom local residents say has used intimidation and violence to remove people from their land and political connections to create false ownership documents. TIAA uses the land for single-crop plantations, mostly soy, but also corn, sugar cane, and cotton. To clear land for the plantations, two tractors pull a chain between them to tear down trees and bushes. Tractor drivers for the plantations described deer, armadillos, emus, snakes, and other native animals being killed by the chains.

The natural fauna in the Cerrado doesn’t look like much – mostly small, crooked trees and bushes – but these plants have long, complicated root systems that allow rainwater to penetrate the buttes and flow to the aquifers and water tables below. By removing this fauna and planting crops with smaller root systems, the new plantations quickly drain local water sources. This is an especially worrisome change as the Cerrado is an important source for three large watersheds (Amazon, Sao Francisco, and Platina), and three aquifers (Guarani, Bambuí, Urucaia).

In addition to draining important water sources, the soy plantations pollute the remaining water with massive amounts of pesticides. In the rainy season, these chemicals are washed into rivers in the lowlands.  Local residents told the fact-finding mission that they are no longer able to use river water during the rains as the water turns different colors and stinks. In response, communities have dug numerous wells pulling water from the already shrinking aquifers.

Large pension fund investments are creating similar problems in water-intensive palm oil plantations. Indonesia and Malaysia, where more than 80 percent of the world’s palm oil is produced, are most affected. Other tropical countries such as the Philippines and Peru also suffer negative effects such as loss of indigenous lands and increasingly violent land conflicts; deforestation and massive fires to clear land; loss of biodiversity and habitats for endangered species; water pollution and increasing water scarcity.

One emerging carbon credit market scheme is a program referred to as “Reduction in Emissions from Deforestation and Degradation” (REDD). Most commonly found in rainforests such as those in the South American Amazon and African Congo (which Pope Francis refers to as “the two lungs of the planet”), the program is designed to enable wealthy countries, who are responsible for the majority of the world’s CO2 emissions, to offset those emissions by paying governments and forest dwelling people to prevent deforestation. The program does not necessarily stop extractive projects in other parts of the forest; in some cases, it encourages these projects. Additionally, REDD projects have also displaced traditional communities who lack formal land titles, and restrictions on traditional forest management efforts by these communities.

This year, the World Bank began funding the Mai Ndombe REDD+ project in the Democratic Republic of Congo (DRC) despite opposition from local, national, and international groups who are concerned about guaranteeing the land rights and human rights of all 1.4 million people in the area. The DRC has been under scrutiny for human rights violations, a lack of transparency, and weak governance.

Brazil’s Acre State in the Amazon rainforest is currently negotiating a REDD program with California. Many of the indigenous communities on the land in question do not have formal land titles and thus are not allowed a proper consultation. They won’t receive benefits and could be displaced. According to the Indigenous Missionary Council (CIMI), a project of the Brazilian Catholic Bishops Conference, past REDD projects have caused social conflicts. The projects also violate Brazil’s constitution which guarantees usufruct rights for indigenous communities and lists land management that may be culturally different from their traditional sustainable use of forests today. The Acre office of CIMI had two break-ins in 2014 and the staff has received continuous threats and face intimidation due to their defense of the rights of indigenous communities there.

At the local level, communities threatened by encroaching soy and palm oil plantations supported by large institutional investors are joining together to maintain their ancestral lands. They have called for solidarity from national and international communities and organizations to help improve laws, protect traditional lands, and more.

The 2017 winner of the Food Sovereignty Prize, the Zimbabwe Smallholder Organic Farmers Forum, supports local farmers working to create alternatives to the agro-industrial model brought to Zimbabwe by large corporations. The forum offers its 10,000 members technical assistance in growing and selling organic products, to enable them to stay on their families’ lands.

How you can respond

Photo: Villager in Brazil holding two bottles, including one with local water polluted by pesticides, to members of the facat-finding mission in Brazil in September 2017. Photo by: Rosilene Miliotti /FASE