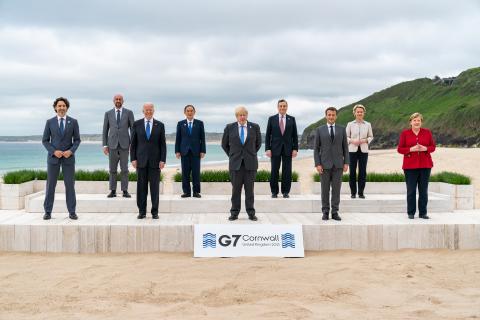 At the G7 Summit in Cornwall, England, June 11-13, the leaders of the seven largest so-called advanced economies – France, the United States, United Kingdom, Canada, Japan, and Germany – met for the first time in two years. This article was published in the July-August 2021 issue of NewsNotes.

Among the top agenda items at the G7 Summit in mid-June were the COVID-19 and economic crises and the threat of climate change. While some progress was made on global collaboration to address these challenges, further commitments by the world’s wealthiest nations will be necessary to ensure a just global recovery from the pandemic and a sustainable future.

Several world leaders at the G7 Summit remarked that, in contrast to the past four years of contentious U.S. engagement in global gatherings, the United States returned to the table with a spirit of collaboration and a more ambitious agenda. “The United States is back,” President Emmanuel Macron reportedly said, regarding the Biden administration’s participation in the Summit.

Regarding the pandemic, the leaders agreed to donate 870 million doses of vaccines in the next year to countries struggling to access vaccines. While this is an important step, it is not enough to meet global demand. WHO Director General, Dr. Tedros Adhanom Ghebreyesus, said, "We are in the race of our lives, but it’s not a fair race…We need more, and we need them faster."

The Biden administration came to the Summit having already backed a temporary waiver on intellectual property rights for COVID-19 vaccines. This “TRIPS” waiver at the WTO would allow other countries to produce COVID-19 vaccines. Prior to the summit, the Catholic Cares Coalition, a group dedicated to promoting and sharing COVID-19 vaccines, of which the Maryknoll Office for Global Concerns is a member, sent a letter to Pres. Biden asking him to prioritize the G7 supporting the waiver and donating vaccines to poorer countries.

While France recently reversed its position and announced a commitment to the waiver, the European Union remains opposed. Germany strongly opposes the waiver, perhaps due to upcoming elections in September and the government’s support for BioNtech, the German company which partnered with Pfizer to produce a COVID-19 vaccine. Since the G7 meeting, Australia has backed the waiver, as has the Asia-Pacific Economic Cooperation (APEC). No other financial commitment was made to ramp up global vaccine production.

On climate change, the G7 countries announced a commitment of up $2.8 billion to support ending overseas coal production in developing countries. While leaders reiterated support for the overdue commitment of $100 billion a year in climate finance to help impoverished countries mitigate and adapt to climate change, they released no details on how this target would be achieved.

Many climate activists were disappointed in the lack of progress. Tasneem Essop, Executive Director of Climate Action Network International, said in a statement on the Summit, “The outcomes from the G7 Summit simply do not measure up to the scale of the twin crises [of the pandemic and climate change] the world is facing.”

While world leaders were meeting in-person in Cornwall, climate negotiators met virtually to discuss the Paris climate agreement ahead of the UN climate talks in Scotland in November. Little additional climate finance and no new initiatives were announced to bring the G7 countries’ own domestic policies in line with the global goal of keeping average global temperature rise to 1.5°C by 2100, the ambitious target of the Paris agreement to avoid the worst effects of climate change. However, the Biden administration did launch a $3 trillion infrastructure plan this Spring that, if passed by Congress, would make progress towards putting the United States on a pathway toward significant emissions reductions.

G7 countries reiterated their support for $650 billion in what are known as “Special Drawing Rights,” a special allocation of financial assets from the International Monetary Fund (IMF). Struggling countries can use SDRs as foreign exchange to purchase much-needed COVID-19 vaccines and PPE as well as meet the needs of their people brought on by the economic impacts of the pandemic.

Since SDRs are disbursed proportionately to the size of a country’s economy, G7 countries receive the largest amounts and are encouraged to donate them to lower income countries. But the G7 countries provided no details on how donations will happen, leaving the possibility that they will be given as loans to already indebted low- and middle- income countries. The G7 leaders made no new announcements on debt cancellation, to the dismay of many who are deeply concerned about the debt crisis facing the world’s most impoverished nations.

In total, the G7 leaders fell far short of UK Prime Minister Boris Johnson’s call to “seize the opportunity to fight and build back better from coronavirus, uniting to make the future fairer, greener and more prosperous.

Photo: Leaders at the G7 Summit in 2021 in Cornwall, England. Photo available on Wikipedia.