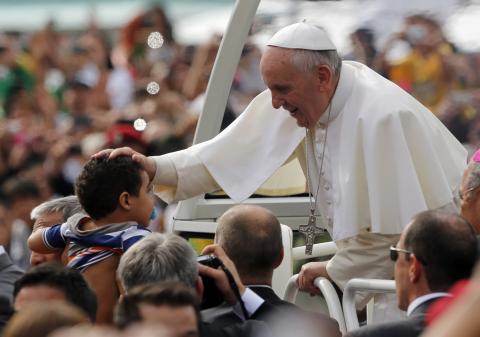 Certain terms used in Fratelli Tutti are best understood in the original Spanish and through the lens of Pope Francis’ South American roots.This article was published in the November-December 2020 issue of NewsNotes.

The linguistic choices of Pope Francis in his new encyclical, Fratelli Tutti, reflect his South American perspective, with profound doctrinal and political implications. It is important for

U.S. English-speaking readers of Fratelli Tutti to understand the way Pope Francis employs certain words in the original Spanish in order to better comprehend and live out his message.

One word with significant cultural connotations, “social,” appears in the encyclical’s subtitle, “on Fraternity and Social Friendship.” For American English speakers, “social friendship” may sound redundant. What is friendship if not “social,” which we tend to use simply to mean inter-relational? But in Spanish, social implies societal, suggesting relationships on a systemic, macro scale. “Social friendship” points to the tension at the heart of Catholic social teaching: For centuries, Christian demands on human relationships were largely interpersonal. But global commerce and the industrial revolution made it increasingly clear that modern humans are in relationship with people they will never meet. Catholic social doctrine helps us understand these relationships and their moral implications.

Jesus teaches us to think beyond traditional relationships when he invites us to ask, “Who is my neighbor?” In Fratelli Tutti, Pope Francis implies that our neighbor may be the Yemeni woman who lost a child to a U.S.-funded bomb, and another may be the worker making our smartphones in a Chinese factory. St. Francis of Assisi, who inspired the new encyclical, spoke of “brother sun and sister moon,” extending social friendship and familial relationships to care for our common home.

In the section “A Better Kind of Politics,” Pope Francis uses several terms with connotations in Spanish not clearly implied by their English counterparts.

The word “populism” is fashionable today, but it has two different meanings in the United States. Stemming from the People’s Party, or Populist Party, in the 1890s, it is used to describe progressive economic policies prioritizing common people over corporate elites. But “populist” may also refer to a brand of politics in which a leader appeals to common people’s frustrations with political elites, seeking not to reform and strengthen democratic institutions, but to convince people to place their trust in the leader instead. Populist leaders often appeal to nationalist and xenophobic sentiments.

Surely, being from Argentina, the pope understands “populism” most with the latter meaning, as it is often used to describe Juan Perón, the most important Argentine political figure of the 20th century. This is also how it has been used globally in recent years to describe several leaders around the world. Francis warns, “Lack of concern for the vulnerable can hide behind a populism that exploits them demagogically for its own purposes.”

Pope Francis highlights two other related words: “people” and “popular.” Often in the United States, “people” is used simply as the plural of “person,” and “popular” as describing something or someone that is well-known and well-liked. But these words have deeper connotations in Spanish. “El pueblo,” or “the people,” is a singular noun that refers to the people, or a people, as a collective whole. The implication is that it refers to common, often impoverished people, again as distinct from an elite class. “Popular,” in turn, describes a connection to or resonance with “the people.” For missioners, accompaniment of “the people” and support for “popular” movements are inextricably tied to Christian concern for the most vulnerable, pursuit of the common good, and the Church’s preferential option for the poor as first articulated by South American theologians.

U.S. readers may also question the meaning of the word “liberal” in Fratelli Tutti. Commonly used to describe leftist or progressive politics in the United States, “liberal” in South America and many other countries refers to classical liberalism, the political philosophy, and is not associated with the left. Liberalism includes the protection of individual rights – a value shared by both “conservatives” and “liberals” in the United States – but also merit-based individualism that undermines shared cultural identity and collective social movements. Liberal economies are market-based, marked by privatization, competition, and consumerism. In this sense, “liberal” as Pope Francis uses it has as much to do with right-wing libertarianism as it does with the kinds of policies U.S. Americans call “liberal.”

With Fratelli Tutti, Pope Francis offers Catholic social teaching and the life of St. Francis of Assisi as gifts to the whole world, to guide us in navigating our current global challenges. The language he employs reminds us that he himself received these gifts in Latin American church, at the margins, among the poor.