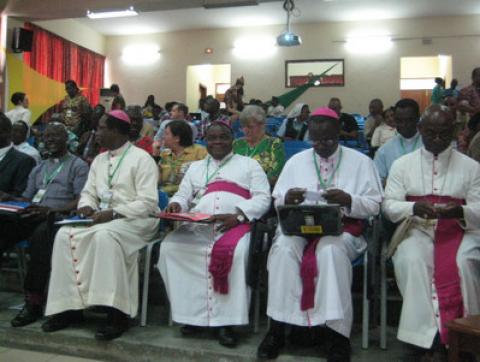 The following article was published in the March-April 2018 issue of NewsNotes. It is adapted from a report by CIDSE, an international alliance of Catholic social justice organizations based in Brussels. The Maryknoll Office for Global Concerns is a member of CIDSE.

More than 70 representatives of African church institutions and faith groups, social movements and grassroots initiatives as well as non-governmental organizations from Africa, Europe and the United States gathered in Abidjan, Côte d'Ivoire for a three-day workshop in November under the slogan “Land grabbing in Francophone Africa: identifying and strengthening endogenous solutions.”

The workshop was organized by members of the platform “Our land is our life” established at the conference on “Land Grab and Just Governance in Africa” in Limuru, Kenya, in 2015 which brought together church and non-church actors to exchange knowledge and strategies on land grabbing, or large-scale acquisitions of land by corporations, governments, and individuals.

The gathering in Abidjan engaged stakeholders from Francophone Africa, with the aim of sharing practices of African communities and developing strategies to stop land grabbing in Africa. At the same time, participants worked on building a network and strengthening movements within Africa, and between Africa and other continents. The conference also provided a space for reflection and discussion on land grabbing grounded in teachings from Laudato Si' and Catholic social thought.

Nine bishops from Benin, Cameroon, Ivory Coast, Gabon, Guinea, Niger, Nigeria and Togo travelled to Abidjan to participate in the conference, to listen to the testimonies of people affected by land grabbing and to dialogue with communities, peasant organizations, NGOs, faith groups, and social movements.

According to Côte d'Ivoire Bishop Joseph Spiteri, “Land grabbing spreads in all regions of Africa. We must assess: What are the different forms of land grabbing? How does the phenomenon differ between countries? But after analyzing the situation we also need to act. We need to discuss, which role the church can play in this.”

The participants adopted a common definition of land grabbing: A phenomena where land is acquired without respect and dignity of the human person, in violation of economic, cultural, and social rights, without transparency, without consultation, and when there is not fair, proportionate or long lasting compensation.

As part of the solution, grassroots movement leaders highlighted the need for food sovereignty (the right for people to access healthy and culturally appropriate food produced through ecologically sound and sustainable methods), and their right to define their own food and agriculture systems.

Grassroots representatives also offered a critique of agricultural investment programs based on public-private partnerships. According to Kadidja Koné of the Global Convergence of Land and Water Struggles, “Land, water and the seeds of peasants are not commodities; they are commons which need to be preserved for future generations. The access to land must be guaranteed through legal provisions on the national, regional and continental level, to protect communities, women and the youth against discrimination. This implies to resist investment programs such as the G7-New Alliance for Food Security and Nutrition in Africa or other public-private partnerships.”

The New Alliance, the G-7’s strategy for supporting agriculture launched in 2012, has been cited for land grabbing among its projects. France has thus pulled out – the first country to do so – leaving the U.S., U.K., Canada, Japan, Germany, Russia, and the EU as donors.

Mariam Sow from the Senegalese partner organization ENDA-Pronat highlighted the need for a comprehensive advocacy strategy, "Our experiences show that the advocacy work on agroecology and good land governance must go hand in hand. It is a social task. Without just access to land, people cannot farm according to their agroecological principles.”

On the last day of the conference, nearly 60 church and non-church representatives signed a joint statement which facilitated linkages among all actors to the political process of bringing church and civil society together. Known as the “Declaration of the Abidjan Conference,” the statement captures the topics identified as most important to the communities affected by land grabbing: their right to manage their lands as commons in respect to the principles of food sovereignty, the need to strengthen their capacities to know and defend their rights, and the protection of their engagement, which has been shrinking due to the criminalization of human rights defenders.

Participating bishops committed to extend their knowledge on land governance and to spread the ideas shared at the conference within church institutions, with some concluding that, “We have never before had such a strong statement by the African church on the matter of land grabbing."

Photo: Nine bishops from Benin, Burkina Faso, Cameroon, Ivory Coast, Gabon, Guinea, Niger and Togo travelled to Abidjan to participate in the conference to listen to the testimonies of people affected by land grabbing and have a dialogue with communities, peasants organisations, NGOs, faith groups, social movements and others. Photo courtesy of CIDSE.