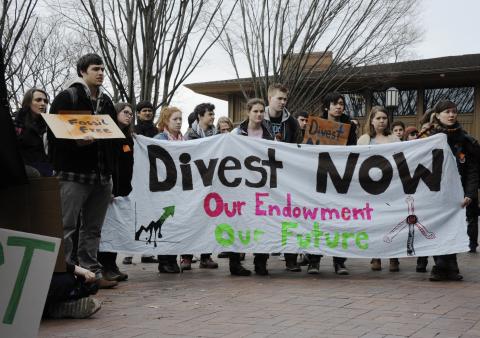 This article is the fourth and final part of a series designed to educate Catholic organizations about ways to participate in the fastest growing divestment campaign in human history - the fossil fuel divestment movement. It was published in the November-December 2018 issue of NewsNotes.

As the fossil fuel divestment-investment campaign has grown over the past eight years, fossil fuel companies have responded by creating a website and fake grassroots campaigns to disparage the idea. Most commenters ignore the main reasons for the campaign that we detailed in our first article in this series: moral and financial concerns around fossil fuel investments.

One of the most repeated criticisms is that divestment doesn’t affect the stock prices of fossil fuel corporations, that it is a “fool’s errand." But for many supporters of the campaign, divesting is done not so much to affect the companies but rather to align their investments with their moral beliefs. For example, they do not want to experience mixed emotions when the Arctic National Wildlife Reserve is opened to oil exploration, knowing that they will have larger returns. They want their financial wellbeing to coincide with the wellbeing of the planet and society. In the same way that socially-responsible investors avoid companies that manufacture weapons, addictive substances, and pornography, today’s investors want to avoid profiting from Earth’s destruction.

Also, while the campaign may not directly affect stock prices, fossil fuel companies are affected in other ways. A University of Oxford study showed that “the divestment campaign could pose considerable reputational risk to fossil fuel companies even if its immediate direct effects are likely to be limited.” Other divestment campaigns have succeeded in creating a stigma around targeted firms that  have far-reaching effects, from diminishing debt financing opportunities to “scar[ing] away suppliers, subcontractors, potential employees and customers” to inspiring new legislation. The Oxford study characterized this last point – new legislation – as one of the most important ways in which stigmatization could impact fossil fuel companies.

“In almost every divestment campaign we reviewed, from adult services to Darfur, from tobacco to South Africa, divestment campaigns were successful in lobbying for restrictive legislation affecting stigmatized firms,” the Oxford study concluded. Other studies confirm these effects.

Another common critique of the divestment-investment campaign is that removing fossil fuel investments will diminish a portfolio’s return. This is an area where managers will have to do their own due diligence as there are a number of studies with conflicting findings.

Studies by MSCI ESG Research, Aperio Group, Northstar Asset Management, Institute for Energy Economics and Financial Analysis and more have shown minimal to negative costs associated with divesting from fossil fuels. Yet other studies from Compass Lexecon, the California Institute of Technology, and others indicate high costs for divesting from fossil fuels. It is important to note that these studies have been commissioned and financed by the Independent Petroleum Association of America.

Each organization needs to estimate its own potential costs and reflect on what, if any, losses it is willing to accept in order to align its investment with its values.

Some refer to the fiduciary responsibility of fund managers to maximize returns as a reason not to divest, yet as former SEC Commissioner Bevis Longstreth points out in a speech to investors, “Based on an informed view of all climate change factors… it is easy to conclude on the basis of financial considerations alone that divestment of fossil fuel company holdings is a permissible option. And the moral dimension makes this conclusion even more powerful.”

The Bank of England’s Prudential Regulation Authority spelled out the various threats to fossil fuel companies from climate change:

Finally, what the detractors from the fossil fuel divestment-investment campaign often fail to recognize in their critiques is the investment side of the campaign. As the International Panel on Climate Change’s recently released climate study showed, the transition away from a fossil fuel-dependent economy needs to happen at a faster pace than originally thought. At a time like this, the least we can do is move our investments from fossil fuel companies to businesses birthing a more sustainable economy, though clearly much more than this will be required of us.