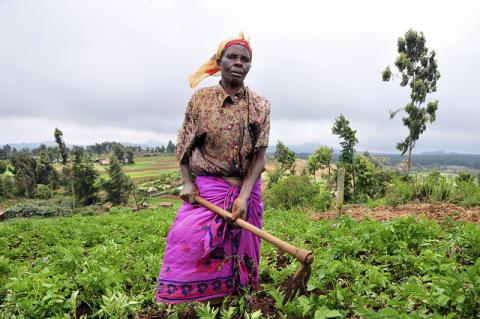 On December 11, Maryknoll Office for Global Concerns was one of 17 faith-based and food security organizations who wrote to Michael Froman, the U.S. trade representative, calling for a change in the Obama administration’s trade policy, leading into the tenth ministerial meeting of the World Trade Organization (WTO) in Nairobi, Kenya. The following article was publishied in the January-February 2016 issue of NewsNotes.

Concerned that U.S. trade policy is favoring the interests of transnational corporations and agribusiness over small holder farmers and the food sovereignty of developing nations, 17 faith-based and food security organizations wrote a letter to Michael Froman, the U.S. trade representative, which states: “U.S. trade policy should enhance countries right to feed their peoples.”

The letter was widely quoted by representatives of African NGOs at the tenth ministerial meeting of the WTO who were advocating for transparency in trade agreements and food sovereignty.

“While we recognize the complexity of the many issues being negotiated in the lead up to the December 15-18, 2015 Nairobi Ministerial of the World Trade Organization (WTO), as faith, development and food policy organizations, we especially want to weigh in on issues related to global food security. We should learn from the 2008 food price crisis, as well as the persistent rounds of price volatility that have followed. These problems will be exacerbated by climate change, financialization of agricultural commodities, and competing demands (especially among crops used for food, fuel or feed) that make it hard for the poorest countries to rely on trade for an affordable supply of basic grains. We urge you to:

“Support developing country efforts to confront volatility in international markets for agricultural goods. The WTO Agreement on Agriculture failed to provide workable proposals to end dumping or import surges. As a starting point, the U.S. should support a functional Special Safeguard Mechanism, without making that support dependent on other concessions on market access. The surges are a documented reality under the current rules, not a prospective risk should further market access be granted.

“Agree to a permanent decision on the G33 proposal regarding food stocks programs to support food security that allows developing countries to provide support to small-scale farmers and poor consumers, while keeping in mind the need for rules that restrict every country from dumping excess supplies in external markets. Several of the groups listed below weighed in on this in a letter to the White House dated October 15, 2015.

“Agree to the modest disciplines proposed by the EU and others on the U.S. practice of monetizing international food aid. As you know, our organizations and many others as well have long called for the U.S. to join the rest of the international community in ending this practice, which has a high risk of disrupting local markets for small-scale producers. Those disruptions often worsen the long-term problems of food insecurity and rural livelihoods that that it is food aid’s short-term objective to alleviate. There are other, smarter and more efficient ways for the U.S. to support food security around the world.

“More generally, we urge you to support a transparent and inclusive multilateral process to resolve these pressing issues. U.S. trade policy should enhance countries’ rights to feed their peoples. It should not advance negotiations that leave most countries out of decisions that they then may have to adopt as a fait accompli at a later time. The U.S. should take leadership to call for an open process involving all stakeholders to arrive at solutions for these urgent concerns in ways that include the interests of developing and developed countries alike.”