A Faith-Based Vision for the UN at 75 and Beyond 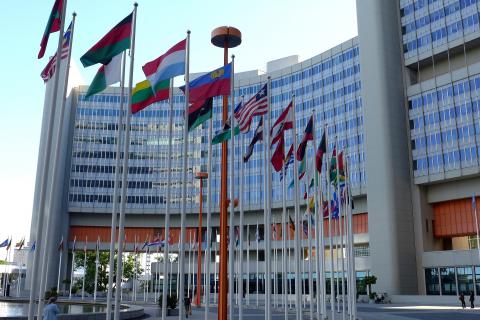 This is an excerpt of a joint statement by organizations representing Catholic congregations of religious at the UN calling for key reforms to the UN System on the its 75th anniversary. This article was published in the November-December 2020 issue of NewsNotes.

“Seventy-five years of unprecedented international collaboration have elapsed since founding the United Nations (UN) and the UN Charter’s signing. On this occasion, we, the undersigned faith-based organizations (FBOs), applaud the very many achievements of the UN System. Furthermore, as we reflect on the experience of these seventy-five years, we recognize that the UN has done much of its best and most important work on the ground when in dialogue and intentional collaboration with FBOs and members of our vast civil society networks. FBO input, guided by principles of subsidiarity and preferential option for the poor (among many others), has frequently been instrumental in ensuring that the world’s most marginalized communities are included in the design, delivery, and fruits of UN efforts on the ground. Our knowledge of grassroots realities and our roles as trusted community pillars paired with the UN’s technical support and multilateral strength have rendered FBO-UN partnerships uniquely impactful…

Nevertheless, as FBOs who began pursuing many of the objectives of the UN decades to centuries before the establishment of the UN (and of many of its Member States), we note some weaknesses and shortcomings in the UN System that we believe this is an auspicious moment to address. As we lose the generation whose members witnessed the horrors of World War II, which became the impetus for the UN System’s establishment, it becomes increasingly important that the System remains relevant and valuable in the eyes of upcoming generations of leaders. The UN Secretary-General has called upon us, as an international community, to “build back better” in the wake of the COVID-19 pandemic as the UN’s initial establishment aimed to rebuild global society in the wake of World War II. Truly, much has changed in our world in the 75 years that transpired between these two occasions. We agree that it is time to build back better, even in the face of possible obstacles...”

Read the rest of the statement here: https://bit.ly/2HE2wvL