Faith in action: Protect Haitians in the U.S. 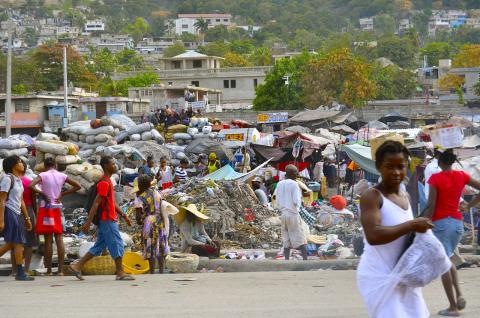 The following action alert was published in the May-June 2017 issue of NewsNotes.

Right now, there are more than 50,000 Haitians in the U.S. who could be deported after July 22. Send a letter to Homeland Security Secretary John Kelly asking him to extend temporary protected status for Haitians.

A top Trump administration official is recommending an end to Temporary Protected Status, or TPS, for Haitian immigrants, a designation that has allowed tens of thousands to live and work legally in the U.S. as their country recovers from a devastating earthquake in 2010 and a massive hurricane in 2016.

To force these vulnerable people to return to Haiti – the poorest nation in the western hemisphere – as it struggles to recover from natural disasters, would be inhumane and untenable.

As part of the Justice for Immigrants Campaign, which is organized by the U.S. Conference of Catholic Bishops, we ask you to send a letter to Homeland Security Secretary John Kelly asking him to extend the Temporary Protected Status for Haitians in the U.S.

On April 21, USA Today reported that James McCament, acting director of U.S. Citizenship and Immigration Services, said in a letter that conditions in Haiti have improved enough to end TPS for Haitians in the U.S., according to a copy of the letter obtained by USA Today.

After the massive earthquake hit Haiti in 2010, the U.S. government pledged to provide protection through TPS for Haitians already in the United States. Today, about 58,000 Haitians have been able to rebuild their lives and work, and raise families in safety, while their remittances support loved ones in Haiti.

When Hurricane Matthew hit Haiti in October 2016, recovery efforts were up-ended. Tens of thousands of homes and schools were destroyed, as well as agricultural crops and livestock, which resulted in widespread food shortages and exacerbated the cholera epidemic – already the worst in the world. To send these vulnerable people back to Haiti would be a terrible hardship on both the individuals and the country to Haiti.

Please take action by going to the Justice for Immigrants Campaign website at https://justiceforimmigrants.org/category/action-alerts/

Photo: Photo: Port-au-Prince, the capital and most populous city of Haiti, after Hurricane Matthew hit on October 4, 2016. Photo available in the public domain.