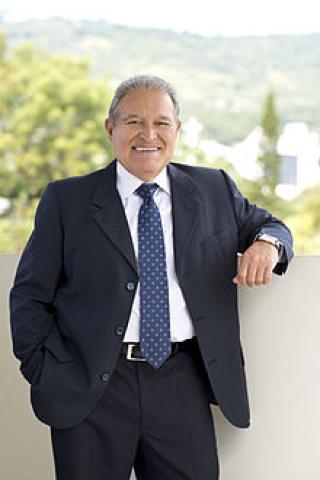 The following article was written by Eben Levey, who is spending several months as an intern with the Maryknoll Office for Global Concerns (MOGC). Eben and MOGC staff member Susan Gunn traveled to El Salvador as part of a delegation to observe the run-off election on March 9; this article, published in the March-April 2014 NewsNotes, was written prior to the final election.

Polls going into the first round showed Sánchez Cerén (shown in photo) hovering around 50 percent, yet his 48.9 percent result on February 2 was not enough to avoid the runoff. With Quijano 10 percentage points behind Sánchez Cerén, the FMLN [were] favorites in the upcoming runoff. The biggest question will be where the Saca voters turn to. Having received only 11 percent in the February elections, Saca is now out of the race. As such, both the FMLN and ARENA are actively courting his voters, sparking rumors on both sides of backroom deals to deliver Saca’s votes to the other party. ARENA spokespersons have claimed that the FMLN supported the Saca candidacy in order to split the right, while the FMLN fears that Saca voters will return to ARENA, the party that expelled Saca on internal charges of corruption (officially) and picking the wrong candidate in the 2009 elections (unofficially).

In 2009, the FMLN, the former guerrilla organization turned political party, won the presidency by fielding a moderate newcomer to the party, Mauricio Funes. Since the FMLN’s ascent to the presidency, the party has expanded social programs, halted mining operations, and brokered negotiations between gangs to bring down the murder rate. As a candidate, Sánchez Cerén has primarily campaigned on the promise to continue the achievements of the Funes presidency.

Leading up to the February 2 election however, there were doubts that all would go smoothly. Quijano campaigned around the twin pillars of public security and free-market solutions. In particular, ARENA criticized the FMLN for catering to gangs in facilitating the gang truce rather than attacking the gang problems with a mano dura, or a firm hand. Initially, Quijano promised to end the social programs that current President Funes has put in place. However, once Quijano realized just how popular the social programs are, Quijano argued that many of them would remain in place should he be elected, but that privatization would make these social programs more efficient. Furthermore, in a trope that was repeated again and again in the Salvadoran media, Quijano and ARENA denounced the FMLN for planning to steal the elections. During an ARENA assembly in September, Quijano stated: "Faced with the certainty of defeat, [the FMLN is] preparing electoral fraud, for which they are counting on the shameless support of the corrupt and traitors like Tony Saca and his group that allow themselves, without decency, to do the dirty work."

The attempt to paint the then upcoming elections as fraudulent was nothing short of an attempt to undermine the gradually improving and democratizing institutions of government, above all the Supreme Elections Tribunal (TSE in Spanish initials). During the Funes administration, the Salvadoran legislature passed an extensive electoral reform law that has improved the transparency and accessibility of the electoral process. Institutional reforms brought in additional observers and party representatives to the operations of the TSE, increasing transparency and preventing any single political party from controlling the operations of the TSE. On the ground, the reforms introduced "residential voting," an increase in the number of voting centers across the country in an effort to increase accessibility and transparency. This makes the process of voting easier for citizens by reducing the distance they must travel to vote while simultaneously introducing checks against fraud so that non-residents cannot be bused into a location to stuff the ballot boxes. The reforms also extended suffrage to the national police, who had previously been banned from voting, as well as to Salvadorans living abroad.

Following the ease of the first round of elections, all signs point to the runoff occurring without major problems. One member of the CISPES election delegation described the first round: "Although there were isolated incidents of problems and small violations of elections law, everything went overwhelmingly smoothly." However, the right wing has ratcheted up attacks on the FMLN and the elections process in a desperate attempt to undermine the legitimacy of the democratic process. Former U.S. Representative Jim DeMint (R-SC), now president of the Heritage Foundation, recently published an op-ed in the Miami Herald that falsely argued that an FMLN victory would turn El Salvador into a narco-state and would endanger safety in the United States. In large part, this smear campaign is an attempt to distract voters and observers from the major setbacks that have hammered Quijano’s campaign. Quijano’s top advisor, former President Francisco Flores, was indicted for embezzlement of government funds. Additionally, President Funes announced that a number of businesses are under investigation for allegedly instructing their employees to vote for particular candidates. However, most polls and media coverage point toward a Salvadoran populace that is willing and able to exercise their electoral rights despite the lies that the right wing is spreading in a desperate attempt to win the runoff election.