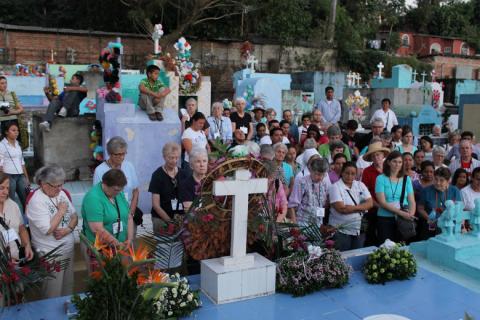 Last summer, the Leadership Conference of Women Religious (LCWR), in conjunction with the SHARE Foundation, issued an invitation to religious women and all faith-based groups to participate in a delegation to El Salvador from November 29 to December 6. The theme of the delegation was honoring religious women who have dedicated their lives to peace and justice in El Salvador and throughout the world. The time of the delegation coincided with the 32nd anniversary of the martyrdom of Ita Ford, Maura Clarke, Dorothy Kazel and Jean Donovan, plus that of Carol Piette, who drowned in a rescue mission just prior to the deaths of Ita, Maura, Jean and Dorothy. The SHARE Foundation aptly facilitated every aspect of the delegation’s preparation for the trip and actual experience while in El Salvador. The five Maryknoll sisters currently assigned in El Salvador and Sr. Ann Braudis, MM, with the Maryknoll Office for Global Concerns, participated in the delegation. The following is Sr. Ann’s reflection on some of the profoundly moving moments that made up the days and nights of the experience, which had about it the aura of a life-changing retreat.

The delegation was a time to: honor religious women; learn more about the SHARE Foundation; recognize those who gave their lives; and reflect on the aftermath of the war years.

Honoring religious women: In the current period when U.S. American religious women have found themselves cast under a harsh and scrutinizing light, the motion to pay tribute to what they and their lay companions have given their lives to, resonates forcefully in the hearts of many people. This is captured in the following words adapted from the writings of the SHARE Foundation:

For more than three decades, women religious and lay women have accompanied the people of El Salvador. Women religious responded to the cry for help during and after the war, traveling to El Salvador and working side by side with communities at highest risk. They gave sanctuary to Salvadoran refugees in the U.S., fought for fair immigration policies, and pressured the U.S. government to cease military aid in order to end the war. Religious congregations provided material aid for the reconstruction of El Salvador in the aftermath of the war and countless natural disasters and continue to support women’s projects around the country. Theirs has been a labor of love infused with the spirit of our sister martyrs - a spirit of justice, compassion, and a willingness to speak truth to power.

One of the richest aspects of the delegation was the opportunity to meet and exchange experiences, ideas and hopes with Salvadoran women religious. One such woman was Sr. Nohemi Ortiz of the Pequeña Comunidad (Little Community). Since Vatican II issued the call to be aligned with the poor, Nohemi and her companions have lived within a peasant community developing an uncomplicated and transparent form of religious life that is faithful to the mandate of Jesus to love and serve each other. They were companions and teachers to our martyred sisters and saw one of their own sisters brutally killed while rescuing children from imminent danger.

The delegation from the U.S. was led by LCWR president Sr. Pat Farrell, OFM, who worked with Sr. Nohemi in years past in El Salvador. During the delegation Nohemi and Pat engaged in public discussions which inspired hope for a future in which the religious and human rights of all people, particularly of women, will be enshrined within the Church and within civil society.

The SHARE Foundation: SHARE is a 30-year old organization which strengthens solidarity with and among the Salvadoran people in El Salvador and the U.S. in the struggle for economic sustainability, justice, and human and civil rights.

The experience that the Foundation provided for the delegation touched the realm of the sacred and was universally received with reverence by the members of the delegation. Beyond the well planned and executed experiences, the deep effect of the time spent in El Salvador was occasioned by the dedicated young women of the Foundation who were the guides and mentors of the delegation. The eldest of these women, Bethany Loberg, is a 28-year old from the U.S., whose life is inspired by the women martyrs and who brought to bear on the delegation a keen ability to link the events of 30 years ago with contemporary events and outcomes in El Salvador. For most members of the delegation, Bethany and her companions pointed to where the future is leading humanity: To the convergence of hearts and minds within the human family through commitment to something larger than one’s self and through the intelligent analysis of unjust situations that are the cause of sorrow and rupture throughout the world.

Those who gave their lives: The delegation visited the town of La Libertad where Dorothy Kazel, an Ursuline sister, and Jean Donovan, a lay missioner, lived and worked over a period of six years. During these years unrest, danger and conflict mounted relentlessly. Poor rural people were completely marginalized from the benefits of society and deprived of all normal political avenues for being heard. This led to the rise of armed guerrilla forces followed by excessive retribution and retaliation on the part of government forces. In March 1980, Archbishop Oscar Romero, who implored, begged and ordered the government to cease its repression of the people, was brutally executed while saying Mass. In the days that followed, Jean and Dorothy stood by his coffin and attended his funeral. Their vigil and their work, particularly among refugees and frightened, persecuted children, did not go unnoticed by government forces.

Because of the great need in El Salvador, Carol Piette and Ita Ford, Maryknoll sisters, went there from their mission in Chile in 1980, arriving precisely on the day of Romero’s funeral. They went to work immediately in the Chalatenango area providing every class of service to the people ravaged by the mounting conflict. Both would lose their lives before the year ended.

When Carol died in August 1980, Maryknoll Sister Maura Clarke left her mission in Nicaragua in order to accompany Ita in El Salvador. This was with the full knowledge of the growing hopelessness of the escalating conflict which, in all probability, would exact from her a terrible price. This came on December 2, 1980: Dorothy, Jean, Ita and Maura, who were generous and faithful friends to each other, were taken at night to a remote area, beaten, raped, and murdered by five members of the National Guard of El Salvador.

Delegates were taken by bus on the long journey to the place of martyrdom of the four women. Silence was kept along the way as each one imagined what must have passed in the minds and hearts of the four on that horrific night of their deaths. Later, we were taken to the place of burial of the three Maryknollers, Maura, Ita and Carol, and spent the night in the community of San Anonio de los Ranchos, by the river where Carol died.

The delegation also visited the University of Central America where six Jesuit priests, their housekeeper and her daughter were cruelly murdered, also in the night, in 1989, at the height of what had become a civil war. To close the precious days of pilgrimage, we visited Romero’s tomb where one feels drawn as if by a magnet to henceforth lead a life that is worthwhile, even noble.

The aftermath of the war years: It can never be forgotten that 70,000 civilian Salvadoran people lost their lives and 10,000 people, mostly youth, disappeared from 1981 to 1992. For most there are no graves where beloved children, spouses and siblings can be mourned. Witnessing so much sorrow and loss, the members of the delegation might have found themselves shattered except for the resilience of the Salvadoran people, especially the mothers of those whose lives were taken.

The delegation was privileged day after day to be accompanied by these women, mothers and wives of the lost, who shared not only their personal stories but the work they do so that the past inhumanity not be repeated. They are dauntless in constructing the historical memory of all that they lived through. They show touching gratitude for the generosity of the five women who accompanied them and mingled their blood with theirs and for all the sisters who have helped them throughout the years. Everywhere the delegation went, women were eager to speak of the impact of the lives of the sisters on their lives and to share details of how they have organized themselves to affect public policy in the promotion of justice and the common good.

Note: The SHARE Foundation accompanies many women’s groups and looks for ways to support higher education for youth who otherwise would not have the chance to study and prepare themselves for leadership in Salvadoran society.