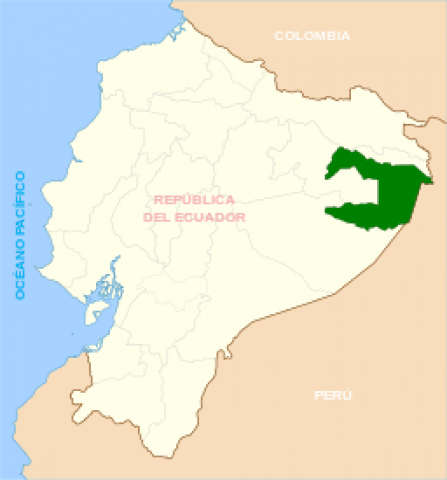 Ecuadorian president Rafael Correa recently placed the final nail in the coffin of his 2007 Yasuni-ITT proposal to preserve a pristine nature and indigenous reserve. In early June he declared that the proposal had failed and he would open the area to oil extraction by Petroamazonas, a subsidiary of Ecuador’s national petroleum company Petroecuador. The following article was published in the July-August 2014 NewsNotes.

The proposal was the first of its kind from a head of state – Ecuador would not extract oil from the Yasuni national park if the international community donated half of the value of that oil, approximately $3.6 billion, to a fund managed by the United Nations Development Program. It was an ingenious plan to preserve an important part of nature while not losing the potential money for Ecuador’s development.

UNESCO identified the park as a biosphere reserve in 1989 because of the incredible amount of biodiversity it contains. Though the size of Delaware, it contains more tree and animal species that in all of North America. The Tagaeri and Taromenane people also live in the area, two of the last groups in the world to voluntarily live in isolation.

In August of last year, President Correa announced that "the world had failed us" referring to the $363 million in cash, debt cancellations and in-kind donations that had been raised to protect the park, far short of the required $3.6 billion. While the international community certainly fell through on its side of the bargain, Correa must assume part of the blame as well. As potential donors investigated the possibility of contributing to the cause, they found that the park is not as pristine as portrayed; it is surrounded by oil wells some that have been operating since the 1990s. In addition, throughout the process, Correa often referred to a "plan B" if enough money was not raised, leaving many potential donors concerned that Ecuador would not follow through with the deal. The fact that the world entered into a financial crisis months after Correa announced the proposal was also an important factor in the failure of the scheme.

When he initially announced the failure of the proposal in August 2013, Correa indicated his interest in granting drilling rights in the area to Petroamazonas, but in response to strong pressure from Ecuadorian and international movements, said that he would hold a public referendum on the issue if they were able to collect signatures of five percent of registered Ecuadorian voters (approximately 583,000), as required by the constitution for such a referendum.

In early April, campaigners presented almost 760,000 signatures to the national electoral council; however, a large number of signatures were thrown out for questionable reasons including the size of the paper and color of ink. The identities of a number of signature collectors also disappeared while in the hands of the electoral council, resulting in the discarding of all of the signatures that they had collected. In the end, the council threw out almost 60 percent of the signatures and denied the request for a referendum. That decision is being appealed but it appears clear now that the government is moving forward with drilling in the area. Oil is expected to start flowing by early 2016.

The Intergovernmental Panel on Climate Change has shown that at least two-thirds of the world’s oil reserves must remain in the ground if we are to avoid warming the planet by more than two degrees Celsius. The Yasuni-ITT plan served as an example of how that could be done without sacrificing potential human development. Its failure represents a severe setback in the struggle for a sustainable planet.