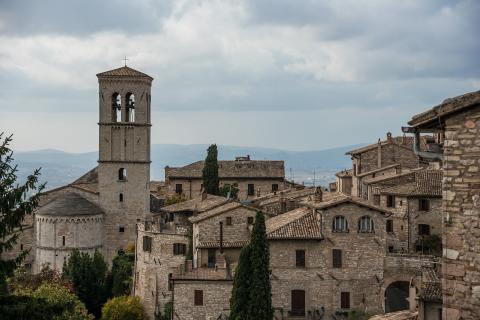 “Dear Friends, I am writing to invite you to take part in an initiative very close to my heart,” wrote Pope Francis in a letter to “young men and women studying economics and interested in a different kind of economy.” The letter, sent on May 1, 2019, the feast day of Saint Joseph the Worker, was an invitation to “an event that will help bring us together and allow us to meet one another and eventually enter into a ‘covenant’ to change today’s economy and to give a soul to the economy of tomorrow.”

The three-day event next November, titled the Economy of Francesco, will bring close to 2000 young economists and entrepreneurs together to Assisi, Italy. While younger leaders will lead the conference, they will also tap into the wisdom of elders who have been working to make the global economy more humane and sustainable for decades. The morning sessions will allow participants to interact with leading thinkers such as Nobel Prize winners Amartya Sen and Muhammad Yunus, economist Jeffrey Sachs,  and social entrepreneur Anna Meloto-Wilk.

In the afternoon sessions, the participants will meet in twelve “thematic villages” to discuss topics such as finance, agriculture, energy, lifestyle, and women in the economy.  On the final day of the event the participants will relate their experiences to Pope Francis and consider what the future holds. Among the participants of the conference, there is a clear understanding that this conference is only the beginning of a much larger endeavor.

Felipe Witchger is a good example of the quality of participants going to Assisi. With a seemingly endless amount of energy, he has led the Community Purchasing Alliance since 2013, a coalition of religious and educational organizations that “leverages the buying power of community institutions to accelerate progress towards sustainability, equity, and justice.” In 2018, Witchger joined the board of directors of Start.Coop, which “provides strategic tools, knowledge and investment that empowers entrepreneurs in building transformative, scaleable, cooperatively owned businesses.”

Witchger is organizing others in the U.S. to be part of the larger process surrounding the Assisi event. “I realized that other countries were having preparatory events and here we are in the U.S., most responsible for spreading the current economic model… with nothing,” he said. While “some think their way into acting,” he said,“I feel like I act my way into thinking.” He began to organize with others in the U.S. who are going to Assisi or interested in helping the process. In addition, he is creating a map of alternative economy networks in the U.S. that he plans to show to other participants in Assisi. The U.S. group has met twice through video conferences and plans to hold an in-person meeting in Washington D.C. in October.

Elizabeth Garlow is another U.S.-based young person who plans to attend the gathering in Assisi. Like Witchger, she is working to organize a network of people in the U.S. to continue the conversation after the conference. She brings a good deal of experience in alternative economics, from co-founding the Michigan Corps, a social entrepreneurship platform, to working as a community solutions policy advisor in the Obama administration. Her current position is with the Lumina Foundation, which invests in “companies focused on post-secondary credentialing and skill-building opportunities.” Since 2012, Garlow has been a member of the Economy of Communion, a network of entrepreneurs in the U.S. and Canada focused on the intersection of spirituality and business, with ties to the Vatican.

As part of the Economy of Communion, Garlow participated in a meeting with Pope Francis in February 2017 in which the Pope issued a call to “change the rules of the socioeconomic system.” He spoke of the need to stop merely helping the victims of the system and instead to change the system so it does not create victims. This meeting was a predecessor to the November meeting.

Garlow is especially excited about the movement-building potential of the Assisi conference. For those who are interested in becoming a part of the movement to imagine an “Economy of Francesco,” resources can be found on the Maryknoll Office for Global Concerns website.

As Pope Francis says in his invitation letter, “Please, do not leave it to others to be protagonists of change. You are the ones who hold the future!” Now is a time for all of us to reflect on what gifts we can bring to this movement and how we can best participate in this world-changing effort. At a minimum, we can pray for the success of these youth in changing the world