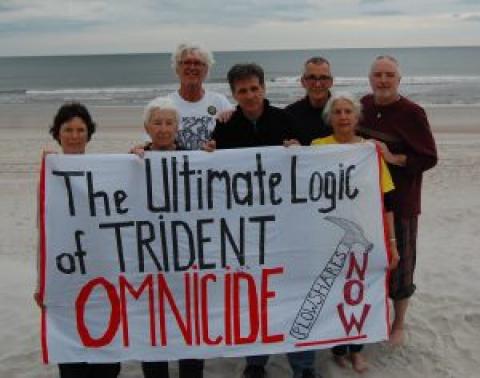 The latest direct action against nuclear weapons by the Plowshares Movement occurred at a nuclear submarine base in Georgia on April 4, 2018. The following article was published in the May-June 2018 issue of NewsNotes.

On the night of April 4, seven activists from the Catholic Plowshares movement broke into the Kings Bay Naval Base in St. Mary's, Georgia. The date marked the 50th anniversary of the assassination of Dr. Martin Luther King Jr. They carried with them a written statement detailing the reasoning behind their direct nonviolent action.

Rooted in Dr. King’s condemnation of what he called the giant triplets of racism, extreme materialism, and militarism, they came to the nuclear submarine base “to answer the call of the prophet Isaiah to ‘beat swords into plowshares’ by disarming the world’s deadliest nuclear weapon, the Trident submarine,” the statement says.

In photographs posted to the Kings Bay Plowshares Facebook page, the group’s banner that says “The ultimate logic of Trident is omnicide” and crime scene tape are seen hanging inside the base. Also photographed are peace slogans spray-painted on the ground and a plaque with the name of the facility smeared with what looks to be human blood.

“We repent of the sin of white supremacy that oppresses and takes the lives of people of color here in the United States and throughout the world,” their statement says. “We resist the militarism that has employed deadly violence to enforce global domination. We believe reparations are required for stolen land, labor, and lives.”

The Kings Bay Naval Base opened in 1979 as the U.S. Navy’s Atlantic Ocean Trident port. Just north of the Florida border, it is the largest nuclear submarine base in the world at about 16,000 acres. It houses six ballistic missile subs and two guided missile subs. Each submarine, the activists assert, carries the capacity to cause devastation equivalent to 600 of the nuclear attacks on Hiroshima, Japan.

The activists point to the United States’ embrace of a permanent war economy amid an endless war on terror as an echo of Dr. King’s perennially poignant words, “The greatest purveyor of violence in the world today, my own government.”
The statement continues: “Nuclear weapons kill every day through mining, production, testing, storage, and dumping, primarily on Indigenous Native land. This weapons system is a cocked gun being held to the head of the planet. As white Catholics, we take responsibility to atone for the horrific crimes stemming from our complicity with ‘the triplets.’ Only then can we begin to restore right relationships. We seek to bring about a world free of nuclear weapons, racism, and economic exploitation.”

The Kings Bay Plowshares activists were denied bond at their hearing on April 6 and currently remain imprisoned at the Camden County Jail in Woodbine, Georgia.

This action is the latest in over 100 similar Plowshares actions around the world beginning in 1980 in King of Prussia, Pennsylvania.

In reflecting on the importance of the Kings Bay Plowshares action, Maryknoll Sister Jean Fallon said: “It was to convey this imminent danger to all the nations, starting with ourselves, that these seven Catholic advocates for nuclear disarmament clarified Martin Luther King’s exposition of the causes behind the use of nuclear crisis: Racism, Militarism, and Materialism. Ours is not to waste time arguing about whether or not their actions are this or that. We are called to support these seven brave persons who stepped up to their call.”

In the words of the Kings Bay Plowshares: “Nuclear weapons eviscerate the rule of law, enforce white supremacy, perpetuate endless war and environmental destruction, and ensure impunity for all manner of crimes against humanity. Dr. King said, ‘The ultimate logic of racism is genocide.’ We say, ‘The ultimate logic of Trident is omnicide.’ A just and peaceful world is possible when we join prayers with action. Swords into Plowshares!”§

Photo: The seven Kings Bay Plowshares activists with their banner which reads “The ultimate logic of Trident is omnicide” in an undated photo taken before the action on April 4. Photo courtesy of http://www.nukeresister.org