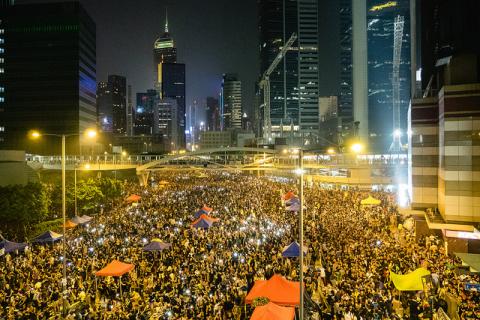 The Catholic Church in Hong Kong raises concerns that a new security law will threaten the basic rights and freedoms of the territory's people. The following article was published in the July-August 2020 issue of NewsNotes.

The Diocese of Hong Kong Justice and Peace Commission signed an open letter to the Chinese government opposing a controversial new security law just days before the vote by China’s top legislative body.

The letter, dated June 16, 2020, and signed by 86 human rights and social justice organizations, including the diocese’s Justice and Peace Commission, was addressed to Li Zhanshu, chairman of China’s National People’s Congress, responsible for the law, which Beijing says is intended to prevent and stop acts deemed a threat to national security.

“Although no details of the law’s contents have been made publicly available, the decision — along with recent comments by Chinese and Hong Kong officials — suggest that it will threaten the basic rights and freedoms of the people in Hong Kong. We are particularly concerned about the law’s impact on Hong Kong, especially its vibrant civil society.”

According to UCA News, some details of the new law, which cover sedition, succession, terrorism and acts by foreign powers and were revealed by state media in June, could put Catholics, including senior clergy, in danger of prosecution. A full draft of the legislation was not released. Beijing has confirmed that under the new rules it will have the authority to extradite people charged under the legislation for trial in the mainland’s opaque and harsh justice system.

A local national security commission supervised by Beijing will oversee the legislation and will be able to overrule local authorities in some cases. The new law will also empower authorities to scrutinize schools including dozens of Catholic diocesan and religious schools on vague national security grounds.

China’s National People’s Congress passed the national security law for Hong Kong on June 30, with all 162 votes in favor.

Image: Mobile phones light up the crowd of pro-democracy protesters in Hong Kong on September 30, 2014. Photo by Flickr/pasuay @ incendo/CC by 2.0