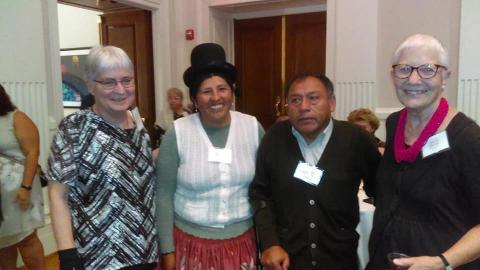 A human rights organization co-founded by Maryknoll Sister Patricia Ryan has won the Letelier-Moffitt Human Rights Award for 2018 for its work with indigenous communities in Peru. The following speech was delivered by Sister Ryan and her colleagues Cristobal Yugra and Yolanda Flores at the award ceremony sponsored by the Institute for Policy Studies in Washington, D.C. on October 4, 2018 and published in the November-December 2018 issue of NewsNotes.

CRISTOBAL YUGRA:  My name is Cristobal and I am here tonight with Yolanda and with Sister Patricia.  We very happy to be with you here tonight. We are representing DHUMA [Derechos Humanos y Medioambiente, which translates “Human Rights and the Environment”] and we want to tell you a little bit about DHUMA and our work.

DHUMA is an human rights and environmental organization from southern Peru. We are a team of men and women, attorneys, social communicators, and community activists based in the city of Puno on the banks of beautiful Lake Titicaca.
If we had to summarize our work in a few words we'd say that it involves making visible what has been invisible and silenced for centuries. More than anything else, DHUMA is a community of people committed to change and social justice.  We are always looking for ways to put our institutional capacity at the service of the Aymara and Quechua communities, whom we have worked with for many years, who are crying out for justice.

To put our work into context, we should say a little about where we have come from. In 1998, with the blessing of the Bishop of Juli, a Maryknoll priest, our offices were opened in Puno under the name of the Vicariate of Solidarity with the Prelature of Juli.

In those years of armed conflict in Peru, the indigenous Aymara and Quechua people – who had been victims of discrimination and exclusion for centuries –  were in the crossfire. The civil war lasted 20 years and took the lives of more than 70,000 people, 3/4 of whom were indigenous people.

At that time, our mission was to protect life and human rights in a time of internal conflict. Our position was always to reject violence "no matter where it came from" and to always try to create pathways towards true peace.
In 2007, there was a drastic change in the church's position with the arrival of an Opus Dei bishop who wanted to put an end to our work.  In the end, we all decided to resign, and we left behind all of our infrastructure, our labor rights and benefits, etc. and created "Human Rights and the Environment" (DHUMA).  We are proud to say that we have never stopped working –  even for one day –  on behalf of the Quechua and Aymara communities of the Puno highlands of Peru.

SISTER PATRICIA RYAN, MM: Indigenous communities today are facing a different type of violence so we have had to adapt our work.  Today, it´s not armed groups that we have to stand up to, but rather extractive industries and multi-national companies.

In the last few years, we have been dedicated to teaching, defending, and making it possible to enforce the rights of indigenous peoples and the rights of Mother Earth, especially in the area of water.  Our entire water supply is endangered today due to the impacts of climate change and severe contamination caused by mining.

The government is giving out mining concessions in areas that coincide with indigenous territories without any respect for the right to free, prior, and informed consent. This situation has led to endless social and environmental conflicts. Puno has the second highest number of these conflicts in the country, conflicts that are the cause of constant tension, death, injuries, arrests, suits, and prison sentences imposed on indigenous people.

One of the most important tools that we use in our work is strategic litigation. When we take a case to court, it is not only to defend the rights of indigenous peoples in specific cases, but also to establish precedents and jurisprudence that will strengthen the legal framework for preventing and resolving conflicts in the future.

There's a particular case that we are working on now that is extremely important for the rights of the Aymara people of Puno and here is where we'd like to ask for your solidarity.

It involves a case known as  the "Aymarazo" where more than 20,000 peasant farmers from the Aymara communities mobilized in 2011 to defend their territory and their right to water,  and they gave a firm “No” to the presence of the Santa Ana mining project owned by Bear Creek Mining of Canada.  The government has been forced to stop operations at Santa Ana, but at the same time, the Peruvian Justice Department filed charges against community representatives and spokespeople, and Aymara spokesperson Walter Aduviri was sentenced to 7 years in jail and given a fine of 2 million soles. ($600,000 USD)

The Aymarazo case is emblematic of the criminal ization of social protest, and if this decision is ratified by the Supreme Court tomorrow – October 5 – it will set dangerous precedents for future indigenous defenders all over Peru.

YOLANDA FLORES: After the Aymarazo mobilizations, Bear Creek Mining successfully sued the country of Peru through the ICSID (International Center for Settlement of Investment Disputes), the investment arbitration arm of the World Bank here in Washington,  D.C. Now the Peruvian people have to compensate this company by paying them more than 30 million dollars. This money that could have gone to pay for basic services that Peruvian people need, is now going to a Canadian multinational. ICSID only considers the rights of foreign investors and does not even look at the abuses and violations committed against the indigenous peoples.  And indigenous peoples don´t have a way to appeal to these international organizations when multinational companies violate their rights.  The most serious thing is that the Santa Ana mining project concessions continue to be in the hands of the Canadian company, a very clear indication that economic interests are prevailing over human rights.

These are our battles, dear friends. DHUMA is a small organization and our contributions are humble. But as we join forces with national and international allies we can make a greater impact on behalf of the indigenous communities we serve, who will always be the primary protagonists.

We are very grateful for the great honor you bestow upon us tonight. Thank you for believing in us and for joining in solidarity with the Aymara and Quechua communities of Puno and with all of the native peoples of Peru. We accept this prestigious recognition, the Letelier-Moffit International Human Rights award, in honor of these communities, who are courageous defenders of Mother Earth.

Many thanks to the groups that have accompanied us: the Institute for Policy Studies, the whole Maryknoll family, the Democracy Center of Bolivia, Mining Watch Canada,  and to all those who make our work possible, and we thank you for your presence here tonight.  We promise to continue to be faithful to the memory of Orlando Letelier, to the promotion and defense of our Aymara and Quechua people, and to the defense of Pachamama.