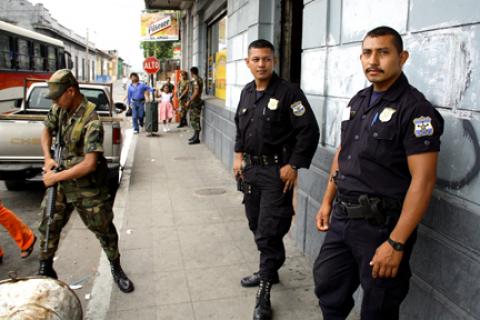 A new report highlights the consequences of restrictive U.S. asylum policies for people deported to El Salvador. The following article was published in the March-April 2020 issue of NewsNotes.

A new report from Human Rights Watch reveals the torture, abuse, and death that some Salvadorans have faced upon deportation from the United States, largely due to targeted gang activity. Meanwhile, certain recent changes in border policy make it even harder for asylum seekers to gain legal protection in the U.S. and thus more likely that individuals facing serious harm will be deported.

The report, entitled “Deported to Danger,” is an effort to fill the gap in research on what happens to those deported from the U.S. to El Salvador. The investigators identified 138 cases of murder of Salvadorans who had been deported from the U.S. since 2013, and at least 70 cases of torture, abuse, disappearance or rape. In many of the murder cases, the individuals were killed by the same gang members or authorities whose death threats had prompted their flight to the United States. The authors believe that their data on deaths is only the “tip of the iceburg,” and that many more deported Salvadorans experience abuse upon return than they were able to investigate.

The authors write, “[This report shows that] as asylum and immigration polices tighten in the United States and dire security problems continue in El Salvador, the U.S. is repeatedly violating its obligations to protect Salvadorans from return to serious risk of harm.” This is especially true given the increasing threats to democracy in El Salvador (see the text box).

Although the right to seek asylum is codified in U.S. law, the Trump administration has increasingly restricted who qualifies for asylum. Maryknoll Lay Missioner Heidi Cerneka, an immigration attorney in El Paso, Texas, wrote an article in the September-October 2019 issue of NewsNotes detailing how these new restrictions make it nearly impossible to gain asylum in the United States.

In a recent interview with Texas Public Radio, Ms. Cerneka explained how, given the inaccessibility of asylum status, attorneys are turning to other legal avenues to keep those seeking protection in the United States even temporarily. However, these other forms of legal protection are also difficult to attain, and may not provide the stable protection or benefits that asylum status does, including work authorization or ability to travel outside the U.S.

In addition, news reports from the border indicate that it is increasingly unlikely that asylum seekers who reach the U.S.-Mexico border will receive a fair hearing. According to the Washington Post, the Migrant Protection Protocols policy, which stipulated that asylum seekers must remain in Mexico while their asylum cases were processed, is being replaced by other, even more restrictive policies. One is the Asylum Cooperative Agreements policy, in which migrants who passed through other Central American countries on their way to the U.S. border are flown back to the first country they entered and allowed to apply for asylum there, even though the gangs which many migrants are fleeing operate throughout Central America and Mexico. Another such policy is the Prompt Asylum Claim Review, which condenses the asylum process from several months to under 10 days, further limiting the possibility of a fair hearing or legal aid.