Crafting the Global Compact for Migration 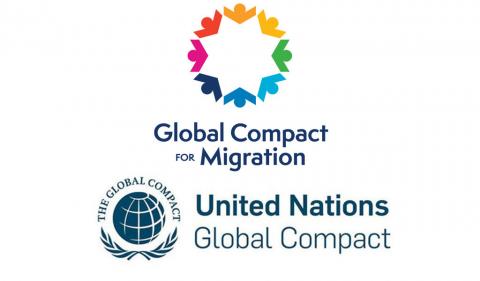 UN member states are scheduled to hold their last round of negotiations for the Global Compact for Migration July 9-13 with the goal of producing a final draft document for adoption at the International Migration Conference in Morocco in December. The following article was published in the July-August 2018 issue of NewsNotes.

Since the United Nations General Assembly hosted the first-ever Summit for Refugees and Migrants in New York in 2016, where 193 UN member states adopted the New York Declaration for Refugees and Migrants, there have been five rounds of negotiations for a final draft of a Global Compact on Safe, Regular and Orderly Migration. Member states are scheduled to adopt the compact at the UN’s intergovernmental conference on migration in Morocco on December 10 and 11.

The summit in 2016 was a historic event, with countries and civil society cooperating at the highest level of governance to improve the conditions of the estimated 244 million migrants and 21 million refugees worldwide. The resulting declaration committed member states and civil society to a two-year process of negotiations to create and adopt two global compacts: a Global Compact on Refugees (GCR) and a Global Compact on Safe, Regular and Orderly Migration (GCM).

The purpose of both compacts is the establishment of a framework for more migration options, lower cost and greater security, respect for human rights, and access to justice when life and human rights are violated. Juan José Gómez Camacho, Permanent Representative of Mexico, and Jürg Lauber, Permanent Representative of Switzerland, have been leading the negotiations.

Negotiations have been challenging. Shadowing the momentum to implement the objectives of the New York Declaration are the growing political scape-goating of migrants and the growing racism and xenophobia worldwide. Also, some countries oppose the inclusion of the term ‘human rights.’ The United States pulled out completely in December, claiming the compact could undermine the enforcement of U.S. immigration laws.

The text of the compact highlights its “360-degree” vision of migration, emphasizing the need for a comprehensive approach that addresses benefits as well as risks and challenges, and covers countries of origin, transit, destination and return. Member states acknowledge their shared responsibilities “to address each other’s needs and concerns over migration, and an overarching obligation to respect, protect and fulfill the human rights of all migrants, regardless of their migration status, while promoting the security and prosperity of all our communities.”

The majority of the document consists of a cooperative framework made up of 23 objectives, each with an associated commitment and set of policy options and best practices. The 23rd and final objective, ‘Strengthen international cooperation and global partnerships for safe, orderly and regular migration,’ was included after the fourth round of negotiations, in May. This new, stand-alone objective was proposed by Comoros, an island nation off the coast of East Africa, for the African Group. The proposal was countered by Austria, representing 27 European Union states which prefer incorporating elements of the African Group proposal into Objective 2 (‘minimize the adverse drivers and structural factors that compel people to leave their country of origin’).

The fourth round of negotiations resulted in substantial revisions of all the objectives. It also included updates in the sections on implementation and follow-up and review to reflect the ongoing UN systems review.

NGOs have submitted statements and oral interventions on the text for both compacts at informal interactive multi-stakeholder hearings. One of the concerns civil society has raised for further discussion in the GCR is the possible omission of protections for children, women, and climate and environmental migrants.

Another concern is disagreement among states over the inclusion of the principle of “non-refoulement.” This principle ensures individuals or groups the right not to be forcibly sent back to the country of origin. The majority of the countries insist on including the term “state sovereignty” to maintain a security approach on this issue. Likewise, some of these countries also insist on distinguishing between regular and irregular migrants, which conflicts with the principle of inherent human dignity and human rights of all migrants promoted by other states. Yet another concern is the need to address climate and environmental migrants in both compacts.

In one of her oral interventions Maryknoll Sister Marvie Misolas, a Maryknoll representative at the UN, addressed the need to highlight a value shared by every faith and culture: the practice of hospitality and welcoming others, to counteract the seemingly negative view of migration. The beautiful description of a French scholar, the Chevalier Louis de Jaucourt(1704-1779), that says, “Hospitality is the virtue of a great soul that cares for the whole universe through the ties of humanity,” is a gentle reminder of our goodness beyond ourselves.