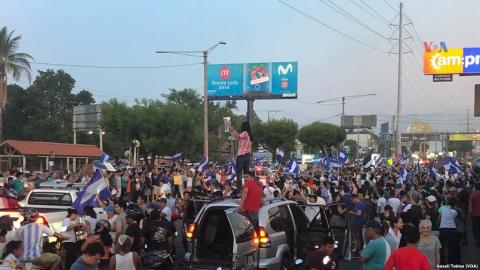 Organizations are documenting increasing human rights abuses in many countries during the pandemic. The following article was published in the September-October 2020 issue of NewsNotes.

We are seeing a growing number of threats to universal human rights norms around the world. In an increasing number of cases, governments are exploiting the emergency powers and lockdowns imposed to slow the spread of the coronavirus as a means to control their citizens. Human rights defenders have been particularly targeted, including activists, journalists, health professionals, women, and indigenous leaders.

The international spotlight is on several countries for their use of repressive tactics on dissidents, including arbitrary detention and excessive military and police force.  A new report by Amnesty International, Daring to Stand Up for Rights During a Pandemic, explains that, “Where states were already pushing back on human rights long before the pandemic, this crisis has provided a new pretext to continue violating human rights, shrinking civic space, and attacking human rights defenders and perceived opponents.”

In the Philippines, President Duterte introduced emergency pandemic legislation in March that would jail anyone who created or spread “false information.” The police have arrested hundreds of people for violating curfews when many Filipinos are not allowed to work and are going hungry. In April, Duterte announced that police and military could shoot ‘troublemakers’ protesting during community quarantine.

Shortly afterward, Duterte and the Filipino Congress rushed through the Anti-Terrorism Act of 2020. The law outlines a vague definition of terrorism that almost anyone could be accused of along with a jail sentence of up to 12 years.

The Filipino Catholic bishops’ conference released a pastoral letter in response, saying, “The return of ‘warrantless detentions’ through this new law cannot but remind us of the initial moves in 1972 that eventually led to the fall of democracy and the rise of a dictatorial regime that terrorized the country for fourteen years… While a semblance of democracy is still in place and our democratic institutions somehow continue to function, we are already like the proverbial frog swimming in a pot of slowly boiling water.”

According to Amnesty International, Zimbabwe has been another notable case. The country has an indefinite stay-at-home order in place, and people are protesting rising levels of hunger and political corruption related to food aid. Three women political leaders from the opposition party were abducted and tortured for participating in protests regarding the food shortage in May. Other leaders have been arrested for providing food.

The latest annual report on threats to human rights defenders produced by Global Witness found that 2019 was the deadliest year yet for these defenders, but the organization predicts that 2020 will be even deadlier. Colombia and the Philippines combined accounted for more than half the murders, while Honduras was the deadliest per capita in the world.

Land conflicts and attacks on environmental defenders are on also the rise. Several countries, including the United States, have significantly cut back environmental regulations in recent months. While people have been placed under stay-at-home orders, extractive industries and agribusinesses continue to operate and receive new contracts. Pax Christi International and Oxfam have both recently released reports documenting the unique challenges posed to indigenous and rural communities trying to protect their land rights in resource rich areas of Latin America during the COVID-19 pandemic.  Women face extra burdens as caretakers and activists as aggressors respond with gender-based violence.

For indigenous communities in Latin America, especially communities in voluntary isolation, not only do they need to defend their culture and land but also their health. The Pan-Amazon Ecclesial Network, which was a driving force behind the 2019 Synod of Bishops for the Pan-Amazon Region, is documenting COVID-19 cases and advocating for extractive industries and other outside interests to stay out of the Amazon during COVID-19. Indigenous communities have been hit disproportionately hard by the impacts of the pandemic.

As a sign of hope, the Pax Christi report highlights how communities in Latin America are finding new forms of resistance and resilience during the pandemic and proposing alternatives to the current extractivist economic model for the post-COVID world.

Antonio Guterres, Secretary General of the United Nations, spoke early on in the pandemic about how this “human crisis was becoming a human rights crisis.” The UN has continued to stress that government action during this time of crisis must be “transparent, responsive, and accountable” and that press freedom and the role of civil society are “essential.” “[Our] message is clear,” Guterres said. “People – and their rights – must be front and center.”

Photo: Protests in Nicaragua in 2018, by Voice of America, available in the public domain.